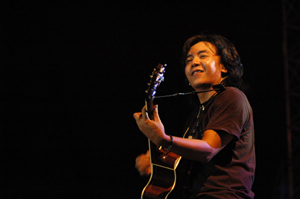 Indonesia has a rich culture of music that sadly often goes unappreciated overseas or even (more sadly) at home. This article offers a quick overview of Indonesian music, past and present.

Many people in Europe often ask me to explain the essence of Indonesian music in a few short sentences. Sadly that’s almost impossible to do. So what really is the music of a country comprised of more than 17,000 islands? Unsurprisingly, Indonesia’s music is a culmination of centuries of trade and interaction with foreign cultures as also are the country’s cuisine and its various forms of Creole–style languages.

While the people of Indonesia have long dabbled with some form of musical art before foreign influences came into play, almost all of the more popular forms of Indonesian music, due to its long tradition of tolerance, have strong influences from outside cultures. The beloved Gamelan, though unmistakably Indonesian, morphed into its present form after the influx of Hindu and Buddhist philosophies came into Java and Sumatra from India, as evident in the Hindu/Buddhist themes of Gamelan/Wayang shows seen even today.

Keroncong, also long considered to be a very Indonesian form of pop music, came from its first trade contact with the West with the music instruments brought along by Portuguese traders. The Dutch, though not so much contributing their own musical stamp, have brought along other western musical genres – Jazz for instance- into the country.

Obviously, with over 17.000 islands, music in Indonesian has some great regional traditions. Not only the language that is used, but also dance, clothing and subject matter vary greatly from region to region.

Music in Indonesia during The Old & New Order

After Indonesia’s independence in 1945, the country underwent a massive political and social transformation, the effects of which can still be seen in popular Indonesian music today. Sukarno’s government insisted on Indonesia producing its own brand of pop music, which to some degree was manifested in the form of performers like Bing Slamet who either recomposed old Indonesian folk songs or utilized traditional Indonesian instruments although many of these groups still showed western musical flavors in their arrangements apparent in the crooner styled vocals or the R&B flavored guitars for rhythm. Many attempts by local musicians to adopt western style rock ’n roll often met strict consequences (as the band Koes Ploes found out when they were sentenced to jail in 1965). This lead to the popular Indo-Rock genre, bands with Indonesian roots popping up in countries such as the Netherlands and Germany.

After the communist witch-hunt of 1966/66, Suharto’s western friendly New Order regime (arguably at the expense of much of Indonesia’s natural resources) brought swift westernization and Anglo-American youth culture poured into the nation’s radio waves and psyche. Rock, Soul, Punk, 80s and 90s Indie-rock, Hip-Hop, and Metal to name a few became the music genres of choice of much of the Indonesian youth. The bands that emerged at the time reflect this with AKA providing the hard rock element, The Rollies with their funk allegiances, Koes Ploes and Iwan Fals who have often been cited as Indonesia’s Beatles and Bob Dylan respectively. 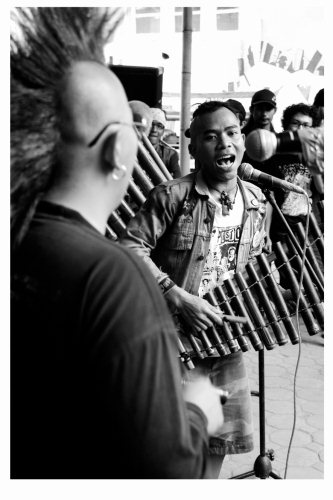 With the fall of Suharto’s New Order in 1998, the country took its first steps in democracy and the music scene in Indonesia today is perhaps at it’s freest in four decades.

You can go clubbing in Jakarta until the wee hours of the morning, go to a black metal gig and see leather clad long haired metal heads bravely withstand tropical temperatures, or join a DJ school to perfect your scratching skills.

The explosion of youth and subcultures brought Indonesia lively punk, hardcore, hip-hop, dance, ska and rock scenes that strive for authenticity in search of an identity. With it comes a process of fragmentation in sub scenes and genres, as well as the usual field of tension between underground/DIY ethics and commercial interests.

With Indonesia being as strong as ever in the South East Asian music scene, a healthy local underground music scene flourishing and a rising economy, the country’s music scenes have a lot to look forward to in the coming decades. As do we.

One thought on “Indonesian Popular Music. A History”