The Muse of Soprano Bernadeta Astari 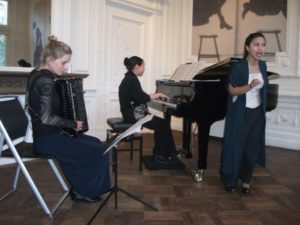 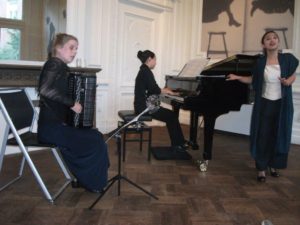 She is constantly pushing the boundaries of what is possible. With her abilities she innovates and is generous, bringing together diverse styles and cultures of Indonesia and Europe, like the dance and poetry. Stimulated by the dialogue between the arts, she breathes the oxygen of imagination and finds balance in muse.

She was a member of Opera Studio Nederland and currently member of the New Talent Ensemble of the Dutch National Touring Opera (Nederlandse Reisopera).

She won the Princess Christina Concours 2007, the Dutch Classical Talent 2012 and also the youth prize in the final of International Vocal Competition’s-Hertogenbosch in 2012. Since 2009 she works together with the Japanese pianist, Kanako Inoue. They give concerts in major concert halls in The Netherlands, Europe, Japan, and Indonesia.

In the opera scenes, she has sung for the Dutch Opera Academy, Opera Studio Nederland, Nederlandse Reisopera, Chamber Sounds Singapore and has made her debut at La Monnaie, De Munt Theater Brussel in 2016. She has given many concerts in Indonesia. Besides performing, she loves teaching and sharing her knowledge to her fellow Indonesian singers.
Bernadeta is one of the first call concert solists, in and out of The Netherlands. Notable achievements have included working with the Royal Concertgebouworkest cello octet and Netherlands Radio Chamber Philharmonic.

She was also selected and honored to be part of the opening ceremony to sing at the opening of the Nuclear Security Summit in The Hague 2014 in front of the 53 world leaders, including Obama. Check out the video: https://www.youtube.com/watch?v=UyAQnuOC2wk

In 2015, the season of ‘Kamer Gesprekken’ (Room Conversations) was concluded in style with a special concert. None other than the Indonesian soprano Bernadeta Astari will defray the final of the season.

Although Bernadeta also sings opera, chamber music has always played an important role in her life on multiple projects. The intimacy of a select group of listeners around her and the freedom to do more in concert than just sing in such a setting, Bernadeta feels completely at home and she can show everyone that she is a born performer. Therefore she also likes to play with her regular pianist Inoue Kanako, their working together was also reflected in their actions. Accordionist Pieternel Berkers added an extra dimension to the evening and let us hear Piazzolla tunes like Mozart arias sound wonderful accordion.

The multi-talented, always charming soprano Bernadeta Astari took us on a trip around the world. With her warm, deep voice, the piano playing of Kanako Inoue and accordionist Pieternel Berkers they complemented each other well, supported and reinforced each other, interwoven into a beautiful unit.

Her voice and the music enchanted people, after the last notes the trio was treated to an overwhelming applause from the audience and a standing ovation. Lover of classical music I was very impressed by the performance and combination of the trio, a harmonious appearance and a fascinating combination. Overall, an amazing and excellent performance full of beautiful tones and breathtaking vocals, full of charm and conviction.that managed to captivate the audience.

In addition, Bernadeta and pianist Kanako Inoue recorded her CD “Perjalanan ‘ (Indonesian for’ journey’), produced by Radio 4 in 2012. Together with the ‘Britten Youth Orchestra’, led by conductor Loes Visser, she sang French poems of Arthur Rimbaud, released on the CD ‘Les Illuminations’ in 2015.

If you would like to attend a performance of Bernadeta Astari or read more about the ‘Britten Youth Orchestra’, you can check the following websites: http://www.bernadetaastari.com and http://www.hetbritten.nl
You may find many video’s and music to listen on: youtube by entering her name and https://soundcloud.com/bernadeta-astari