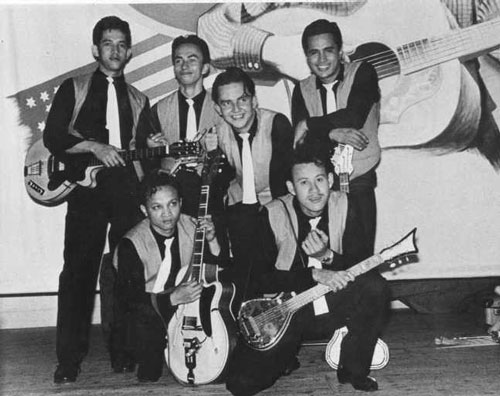 Never mind Elvis Presley and Bill Haley, the Tielman Brothers and their fellow Indo-rockers really rocked Europe in the 1950s. Pretty much forgotten in Western Europe and generally ignored in Indonesia, the story of Indo-Rock is a curious one, closely intertwined with the story of Indonesian settlers in the Netherlands after Indonesia’s independence in 1945.

The sub-genre would prove to be one of the first modern marriages between western rhythm & blues/rock & roll with keroncong. Let’s delve into the background of Indo-Rock, once popular, now almost forgotten, though some bands are still going strong and some die-hard fans keep Indo-Rock alive.

The Exodus, the start of Indo-Rock

The Hot Jumpers, one of the protagonists of Indo-Rock

They of course brought with them their tropical flare and love of the guitar, introduced by the Portuguese in the 1600s. Many emigrated and settled in The Hague (still evident by the abundance of Indonesian food available in the city), Amsterdam, Rotterdam and Groningen. In the mid-to-late 1950s, the youth, influenced by the new sound of American R&B/rock & roll, picked up guitars and formed bands. The Real Room Rockers, The Hot Jumpers, Oety & His Real Rockers and Electric Johnny & The Skyrockets were the first Indo-rock bands to appear from these cities.

The Tielman Brothers – rock it up!

However it was argued that Indo-rock only really took off when The Tielman Brothers entered the scene. Andy, Reggy, Loulou, and Ponthon Tielman, along with their parents emigrated from Surabaya to Breda in 1957 and the four brothers were quick to continue the band they have previously established in Indonesia, The Four T’s. They quickly changed their name to The Tielman Brothers and started playing at various venues, including an appearance at the Brussels World Fair in 1958. Their fame skyrocketed after their electric performance at the fair, wowing the crowd with their wild rock & roll and showmanship hardly seen in Europe (considering it was a good few years before the emergence of The Rolling Stones, The Who and Jimi Hendrix).

The band, with their 3-guitar line-up, silky guitar tricks, acrobatic stage shows and crowd-interaction soon found fame in neighbouring Germany, Belgium and France right up to its disbandment in 1981. Perhaps it was the band’s ‘foreign’ sounding name that prevented them from being famous in Indonesia, yet their influence on the European music scene, and perhaps playing a part in the acceptance of Indonesian immigrants in the Netherlands is not to be ignored.

For more info on Indorock check out the brilliant The Story of Indorock website (in Dutch) or the Indo-Rock Gallery for an overview of Indo-Rock bands.