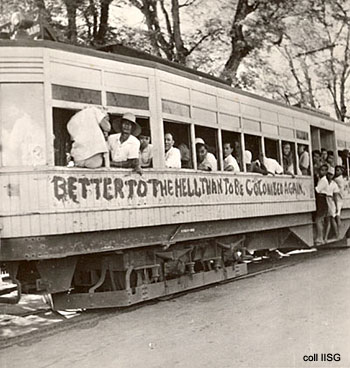 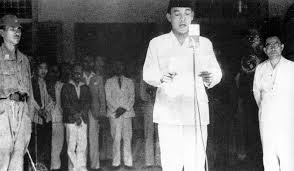 On August 17, 1945 Indonesia declared independence from the Netherlands. A 350-year-long Dutch rule in the Indonesian archipelago had come to an end. From that day onward, the people would choose their own destiny. For decades, the Dutch government considered Indonesia being an independent state from the year 1949. Only in 2005 did the former colonizer recognized that Indonesia had become independent.

The Netherlands had always considered Indonesia to have become independent on 29 December 1949. On that date Queen Wilhelmina had formally handed over sovereignty to Indonesia. It had taken a long time before the Dutch could let go of what they considered to be their territory and acknowledge Indonesia’s sovereignty. Now, Nederlands-Indië (the Dutch East Indies), was forever history. More than four years of violence had passed since the Proklamasi, the declaration of independence by Sukarno and Hatta in 1945.

Long before the Republic of Indonesia was proclaimed, a ‘national awakening’ had reached most parts of the colony. It wasn’t until 1942, however, that Indonesian independence seemed feasible. With the Japanese invasion of the Dutch East Indies in 1942, World War II had now also reached the Dutch colony. Within days Dutch rule was removed. For the first time in their strive for independence, nationalists saw a serious opportunity. When Japan capitulated 3 years later, following the devastating atom bombs on Hiroshima and Nagasaki, the time had finally come. Two days later, nationalist leaders Sukarno and Hatta proclaimed independence in Jakarta.

With the proclamation, the Indonesian independence struggle had reached a point of no return. This could probably not have been better expressed than in a phrase written on a city train in Jakarta that day: Better to hell than to be colonized again. Within a matter of months young Indonesian nationalists (pemuda’s) were controlling over large parts of Java and other islands. A republican government, headed by president Sukarno, governed from Jakarta.

As it turned out, it would take much more time, and cost many lives, before Indonesia was free. By the end of 1945, the Dutch came back to “restore order” in what they still considered to be their colony. Weakened by World War in Europe, it took them months to build up a significant military force. Although never described as such in (Dutch) history books, what followed was nothing less than a colonial war.

The Indonesian military and many militias, mainly active in rural areas, were very determined: the revolution would prevail. In 1947 and 1948, the Dutch launched two large-scale military operations. “Indonesian resistance” however would not be defeated. Under pressure of the international community, the Netherlands finally accepted its defeat in 1949. In total, almost 6.000 Dutch troops, 100.000 Indonesian fighters, and an estimated 25.000 to 100.000 civilians were killed.

Although Indonesian independence had to be won by years of struggle, it had already been declared in 1945. When Ben Bot attended Independence Day celebrations in Indonesia in 2005, he became the first Dutch official to acknowledge this. In an official speech he stated that the Dutch government “morally and politically” accepted Indonesia becoming independent on August 17, 1945. Moreover, the military violence between 1945-1949 had put the country “at the wrong side of history”. History, after all, is mostly written by the victors.

2 thoughts on “70 years of Indonesian Independence”