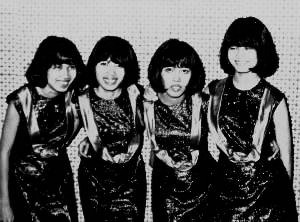 Indonesian Rock – A Documentation of Change

The story of the development of rock music in Indonesia is tightly related to the cultural and political changes the country faced in the last 50 years.

Rock during the Sukarno Years

While the West and many other western-styled democratic countries revelled in rock music, the left-leaning government of Sukarno took a dim view of western influence in the early days of the Indonesian Republic and restricted the purchase and sale of Beatles, Rolling Stones, Elvis Presley, Tom Jones and other western records, as well as those of home grown artists performing western style rock music. This could be accredited to a rejection of Western culture after three centuries under Dutch colonial rule and was argued to help Indonesian artists create their own form of Indonesian pop music without too much interference from western values.

Sukarno’s government insisted on Indonesia producing its own brand of pop music, yet many of these groups still showed western musical influences in their arrangements shown either by the crooner styled vocals or R&B flavoured guitars for rhythm. A few of Indonesia’s more popular groups, most notably Koes Bersaudara, later renamed Koes Plus found life increasingly difficult under Sukarno with frequent queries from the authorities for performing western rock music (the Koes Brothers were even incarcerated by the ’Old Order’ government as a result) while other Indonesian rock’n’roll pioneers like the Tielman Brothers had to make their name in Europe with ex-colonial master the Netherlands being the main port of call.The Netherlands proved fertile soil for the emergence of Indorock. Read more about this in my overview of Indorock.

The New Order and the blossoming of the Indonesian Rock scene

The 1965 military coup and subsequent communist witch-hunt led by succeeding president Suharto finally opened the floodgates for western culture to pour into Indonesia after he seized full power in 1967. Suharto’s New Order regime’s friendly stance towards western powers allowed the emerging rock music scene to flourish in Indonesia with groups like the all girl band Dara Puspita touring Europe, albeit with subsequent major drawbacks and restrictions. The 1970s was perhaps the pinnacle of the development of rock music in Indonesia, With the country entering open relations with the western world and exchanging much of its natural resources, many Anglo-American artists the likes of Led Zeppelin, Deep Purple, Genesis, Jimi Hendrix, The Doors, Rush, King Crimson, Emerson Lake and Palmer, Janis Joplin and Black Sabbath flooded Indonesia’s radio waves while its fresh new sound helped create many of Indonesia’s best known artists of the seventies, be it directly or indirectly. The decade also provided numerous bands and household rock stars, still appreciated in Indonesia today – AKA led by charismatic Ucok Harahap, God Bless with Achmad Albar, The Rollies, Deddy Dores’ Freedom of Rhapsodia, and Harry Roesli amongst other.

The eighties and the first half of the nineties saw the bands that dominated the seventies namely Koes Plus, Achmad Albar of God Bless, Deddy Dores, King of Dangdut Rhoma Irama and Iwan Fals further flourish domestically as well as other musicians influenced by the new mainly Anglo-American genres (hip-hop, British indie rock, punk and heavy metal in particular) flooding the country.

Koes Plus enjoyed great succes in the 70’s in Indonesia

The fall of Suharto and the New Order regime in 1998 saw the country take its first steps of democracy and the music scene in Indonesia today is perhaps at its freest in four decades. From leather clad metalheads to a flourishing Indie scene, rock in Indonesia has quickly developed in a wide variety of subgenres.