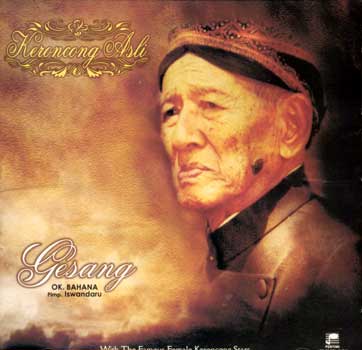 Keroncong: An Overview & Obituary to Gesang

Keroncong is a form of Indonesian music brought to the Indonesian shores by the Portuguese. Based on Portuguese fado, the music had its heyday during Indonesia’s struggle for independence. Today Keroncong only has a small but dedicated following. This article traces the history of Keroncong’s melancholy and its main composer Gesang Martohartono.

The Portuguese presence in Indonesian culture has often been overlooked over the influence of the Dutch, Indians or Arab cultures. For starters the Portugese influence in Bahasa Indonesia is quite apparent, think of words such as jendela (Eng: window, Por: janela), pesta (Eng: party, Por: festa), meja (Eng. table, Por. mesa), in fact, over 60 words in modern Indonesian stem from 16th century Portuguese. Yet its biggest impact on Indonesian psyche is perhaps the advent of keroncong, where before Dangdut music emerged, was perhaps the definite voice of the Indonesian working class. Indonesia’s Creole folk music, if you will.

Fado (a type of Portuguese guitar, similar to a ukulele), brought over by Portuguese sailors and African slaves via Goa in India in the 16th century, formed the basis of what was to become the slow tempo keroncong of the 19th and 20th centuries. While keroncong as a genre has seen many changes in styles and the musical instruments used, the genre evolved slowly and steadily before settling on a modern-day ensemble of a ukulele, guitar, violin, flute, cello and bass and combines Javanese chord progressions with Westernised vocals. The genre reached its peak with Bengawan Solo, perhaps the most well-known keroncong song tied with Indonesia’s struggle for independence. And since this article coincides with the year that Gesang -the composer of Bengawan Solo – died, a short obituary of one of Indonesia’s best-known composers is fitting.

Born in Surakarta (Solo) on October 1 1917, Gesang Martohartono was an auto-didact musician who supported his economically challenged family through his composing and singing prowess. By the time he reached 23, Gesang wrote Bengawan Solo, a simple ballad reminiscing about the longest and perhaps most important river in Java, Solo River, which made Gesang the undisputed ‘king’ of modern-day keroncong as well as being appreciated abroad. The song, which Gesang composed with a bamboo flute in his hometown of Surakarta is an ode to the reliability of the river to provide life for the Javanese as is evident in the following lyrics:

The song, originally written in 1940, soon caught the attention of the occupying Japanese forces in their occupation of the Dutch East Indies (1942-1945), and was brought home to Japan by the soldiers after the war. Bengawan Solo was subsequently popularized in Japan by Toshi Matsuda and in many other Asian countries. Gesang went on to compose many other popular Indonesian keroncong namely Jembatan Merah, Caping Gunung and Dunia Berdamai amongst others. He lived his entire life in Solo before finally laying to rest at the age of 92 on May 20 2010.