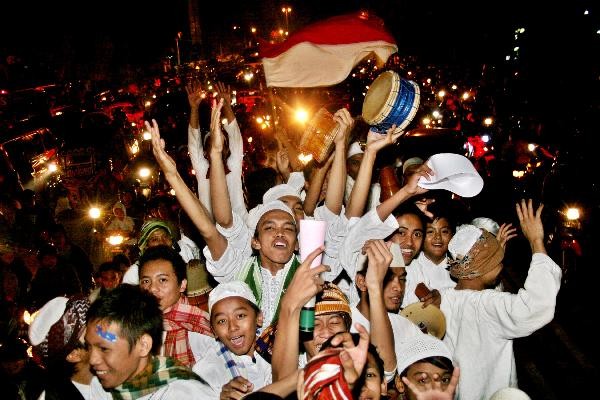 Happy Idul Fitri Mohon maaf lahir dan batin. May these joyous days bring happiness for you and your family. 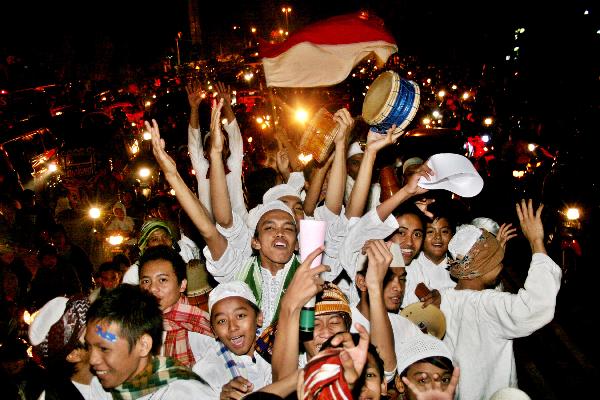 Idul Fitri, the end of Ramadan is near. Idul Fitri is the most important day on the Islamic calendar. Cleansed and a few pounds lighter, millions of Indonesians return home (‘pulang kampung’ Obama would say). As lemmings squeezed in overflowing economy busses, they are prepared to take the final hurdle, after conquering lengthy queues to obtain the last overpriced tickets, facing kilometers of traffic jams crisscrossing the country.

What moves Indonesians during Idul Fitri is an irrepressible urge to meet their family, particularly their parents. Shaking hands, asking for forgiveness and blessing could theoretically be done anytime. Mobile phones could also come in handy; speaking through the phone, or texting for forgiveness shuns the caller from being ashamed. Indonesia is utterly connected by high-tech devices. Yet, during Idul Fitri the sense of love drives people to return home and physically connect with their family.

Desire to express love sends people, house maids, construction laborers, factory workers, becak drivers, beggars and people of the city slums, packing, waiting hours even days queueing in front of a few train ticket booths just to get a ticket home. This day of togetherness encourages them to spend most of their money, painstakingly earned during the year, on Idul Fitri with their family. It urges them to rent cars, rental prices increasing over 300 percent during the hectic days, book flights, beg, borrow but not steal, just to meet their family. It prompts them to travel uncomfortabely for days, just to meet and ask forgiveness from their parents. 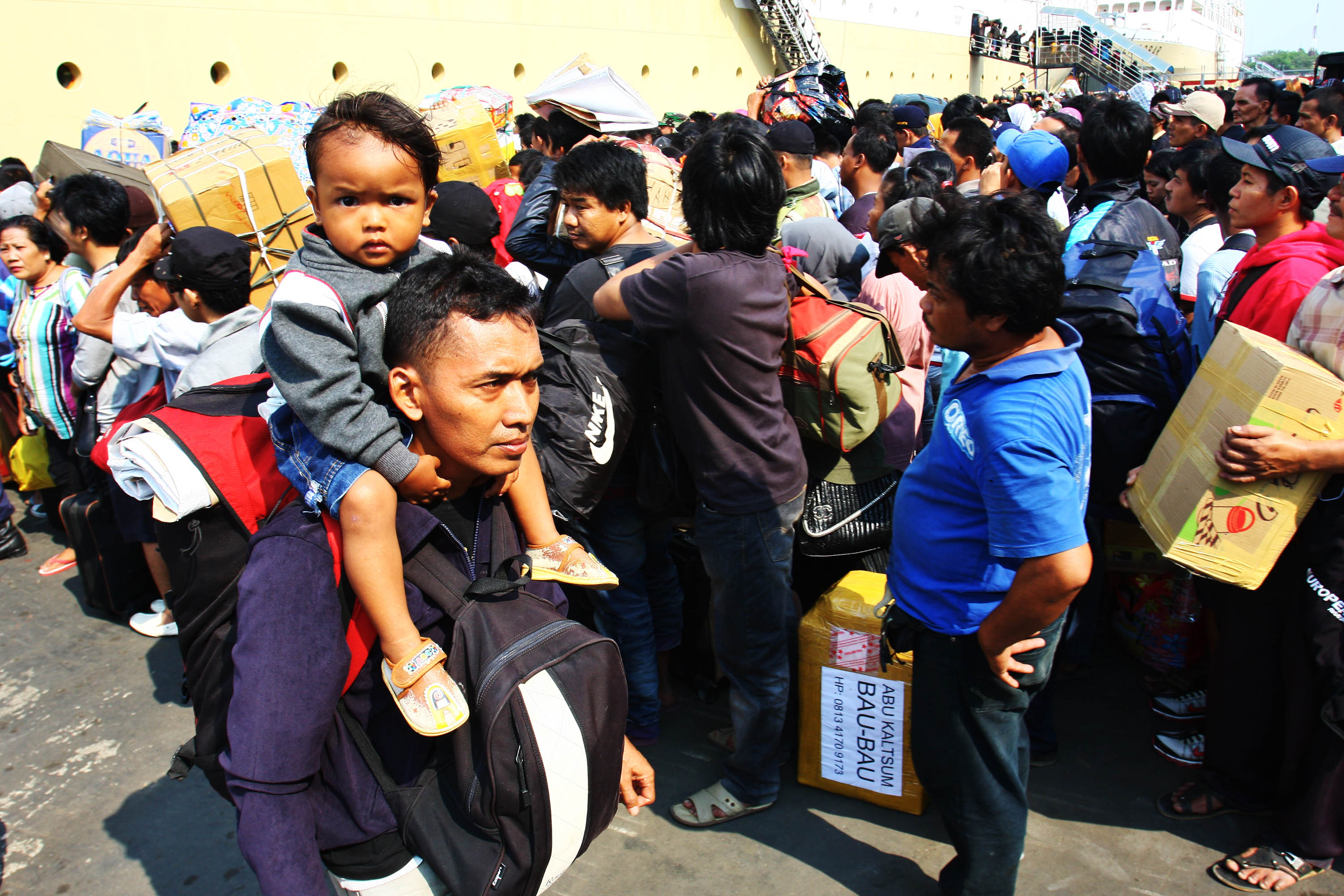 Mudik: On the Road Home

The yearly workers’ struggle to travel home during Idul Fitri brings million of people on the road. Mudik derives from a noun, “udik”, meaning up stream or remote place and is culturally characterized by the humble, simple character of a person. Udik people then could denote someone from a remote area, as wel as a humble, innoncent person. Hence, a modern city guy could also be considered “udik”, if he or she has the abovementioned psychological traits. 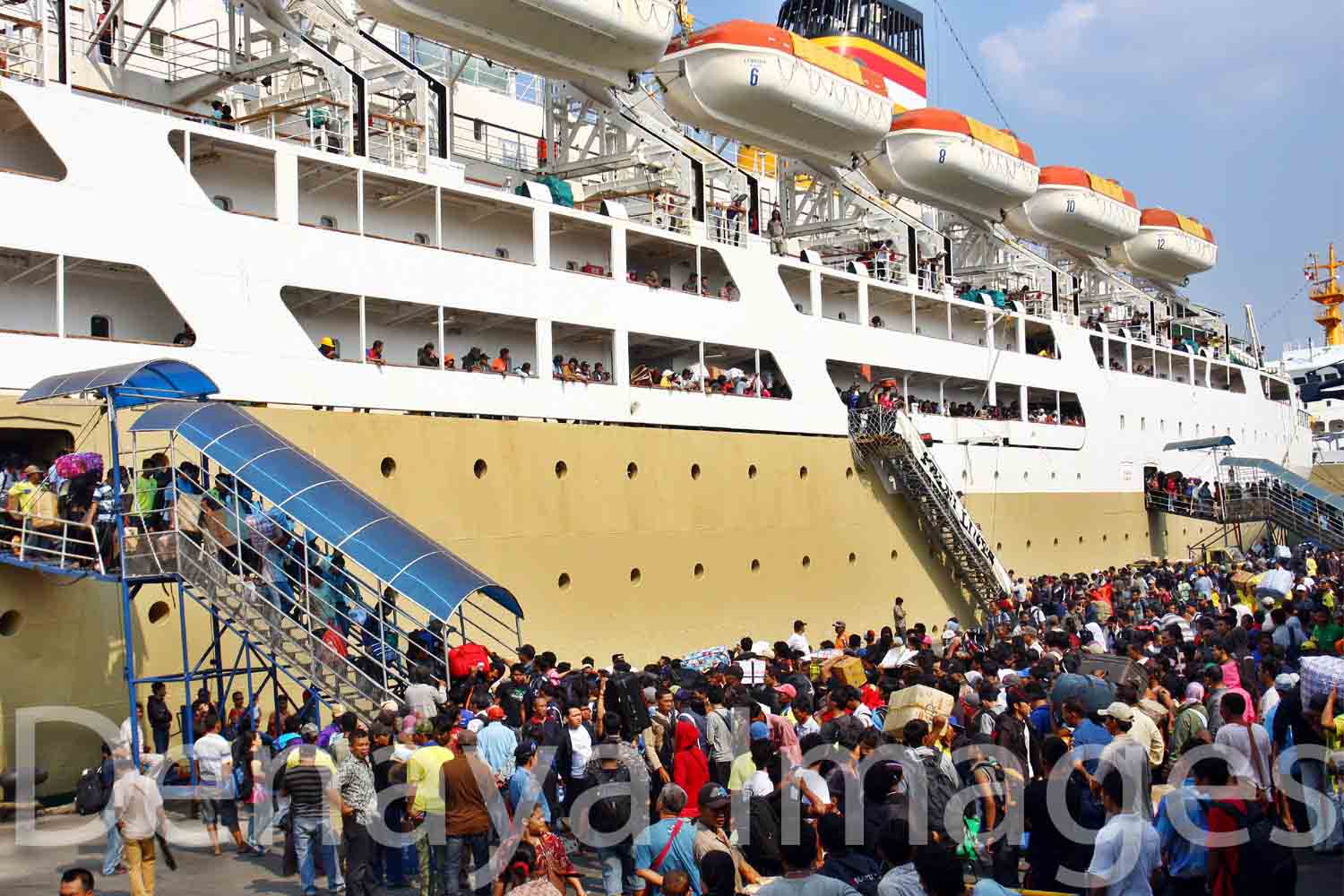 By adding the consonant “m” (mudik) it lexically becomes to mean to travel from the city to the village, from a developed region to a remote and less developed place. Mudik is then not merely a religious affair, but also an economic and cultural phenomenon. Many people from the town spend their money in their neighborhood; by shopping at the local market, giving alms to the children of the family, which to some extent indicates their economic capacities and social status in town. Before leaving the city, many of them exchange their money into smaller value notes, such as Rp 5,000, Rp 10,000 or Rp 20,000 to be able to give out money to more family members. This is very possibly the cause of people inundating the countryside after Idul Fitri; exposing the Indonesian infrastructure to even more transportation problems than normally and leaving the Jakarta streets eerily quiet.

Mass mobilization to the countryside of course has a great impact on society. Over 15 billion people in 1,5 million cars and 3,6 million motorbikes (and countless trains, busses, boats and minivans) travel across Java during Idul Fitrri. When people work out of town, which is common nowadays, mudik could also take place between cities. A Surabaya born manager working at a company in Jakarta makes his travel West-East, possibly by plane. The other, less fortunate Indonesians, travel by bus, train, minivan or motorcycle…anything to get back home. The government tries to prepare for this mass migration, but to no avail…hours and hours of traffic jams are the final test for the devote muslims returning home.

Idul Fitri Menu of the day

Idul Fitri is considered the most important day of the year in Islam. People called it Riroyo, the Great Day. As with every other possible occasion in Indonesia, food plays an important role. Among various local dishes, most families usually serve up some traditional Idul Fithri delicacies, such as ketupat or lontong, (rice boiled in plaited coconut leave rhombus packets), rendang (spicy beef simmered in coconut milk and various local spices), opor ayam (chicken meat cooked in coconut milk), sambal goreng hati (fried ground up chillies blended with beef liver) and many more additional dishes.

Takbiran, is the chanting of God’s Greatness: “Allahu Akbar, Allahu Akbar, Allahu Akbar. Laa ilaaha ilal-lahu wal-Allahu Akbar, Allahu Akbar wa-lilla hil hamd while driving across the city the night before Idul Fithri. Driving on open trucks and motorcycles the participants, muadzins move slowly under the lights of torches they bring along, while chanting. This activity ends before midnight. Lighting firecrackers is also popular before takbiran. Not entirely risk free as last year, it was said more than 20 people died on takbiran night.

The next morning, the Muslims join the Shalat Id in public places; city mosques, public squares or parks. Before the prayer, the adult Muslims have to pay zakat, Sadaqat-ul-fitr, obligatory charity alms for the poor and the people in need according to Islamic rules. Some say, sadaqat-ul-fitr could amount to over $ 2,5 billion a year if all Muslim observe the rules. Children are outfitted with new clothes, proving the highlight of the year for most children. Coupled with the legally mandated salary bonus for all employees, known as Tunjangan Hari Raya, which sometimes adds up to a whole month’s salary, the following Lebaran holiday, is a reward well earned for a month of fasting and atonement. During Idul Fitri, forgiveness and togetherness bring high spirits all over the nation. Salam Aidilfitri and Selamat Hari Raya everybody!