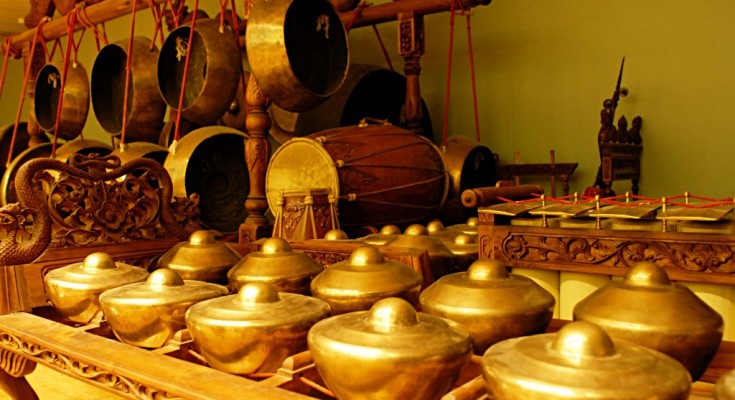 Mention ‘Indonesian Music’ to most folks in the Western hemisphere (or anywhere else come to that) and ‘Gamelan’ would be one of the first things that’ll cross their minds. Unsurprising really, as Gamelan itself is arguably Indonesia’s oldest form of music and has had its fair share of influence in Western culture. Everyone from Claude Debussy at the 1889 Parisian World Trade expo to recent movie scores that (Golden Compass, Girl With A Pearl Earring and Katsuhiro Otomo’s Akira), have utilized the distinctly Javanese/Balinese ensemble in their compositions. And despite its Hindu-Buddhist connections, Gamelan is perhaps as genuinely Indonesian as it gets (keroncong, dangdut, and modern Indonesian pop-music have much stronger foreign influences).

A Background of Gamelan

The Javanese have experienced contact with foreign cultures since records began. With carvings of Gamelan music scenes found on the Borobudur that date back to 800 AD, we know for certain that this music form has intermingled with Hindu-Buddhist culture (perhaps the earliest foreign influence in the archipelago). Yet many argue that its roots are much older. While the presence of Ramayana & Mahabharata stories in wayang (shadow puppets) at Gamelan performances further indicates the influence of the Indian sub-continent in early traditional Indonesian music, the various Javanese musical instruments churn out quite distinct Malay sounds, melodies and tunes. The Gamelan also reflects a huge part of Indonesian culture in general, where collectivism is considered much more important than individualism (almost all the instruments in the gamelan have to be used as part of a larger ensemble and cannot be used individually to any enjoyable degree).

Having said all that, how does one know what a Gamelan ensemble looks and sounds like without having seen one? Here are a few quick pointers:

The American Gamelan institute is a great source for more information and ‘gamelan related surprises.’ Also, check out this (too) short video on making Gamelan instruments: