White Shoes & the Couples Company: The Sound of Yesteryear, Today

If there’s one thing Indonesians of my generation (born anytime between 1978-1988) most have in common, it’s the love for the melodies of pop tempoe doeloe that existed during our parents’ generation. Names varying from Koes Ploes, Dara Puspita, Chrisye, Panbers and even The Rollies were more-or-less ever present in the stereos of our parents during our formative years. Thus it’s not really surprising that one of Indonesia’s most recognized current bands abroad happen to embrace the old pop sound of Indonesia while simultaneously exporting the sound worldwide. Having toured the world and back again, the sextet known as White Shoes & the Couples Company are Indonesia’s answer to the independent pop phenomenon:

WSATCC were formed in 2002 when art-college lovers Aprilla Sari and Yusmario Farabi decided to take up the violin and rhythm guitar respectively and form a band together with lead guitarist and close friend Saleh Husein. The band quickly expanded and the trio recruited other members in the form of husband-wife pairing of Ricky Surya Virgana (bass, cello) & Aprimela Prawidyanti (piano, viola, synths, keyboards) as well as John Navid on drums. After a few years of rehearsing and performing their trademark sound (a combination of classic movie scores, 1960s pop and modern indie-folk), the band released their self titled debut album, on one of Indonesia’s most well known and notorious independent record labels, Aksara Records in 2005 and also scored various independent Indonesian films such as Janji Joni & Berbagai Suami. 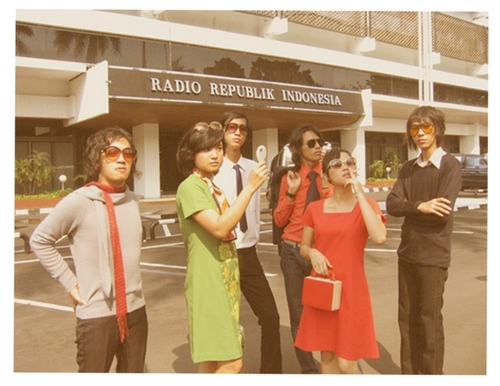 The success of their first album only seemed to spur the band to greater heights as they were approached by Chicago’s Minty Fresh label soon after the release of their EP Skenario Masa Muda in 2007. As the American label re-released WSATCC’s first album in many new markets (US, Canada, Mexico, Australia and Japan), the band quickly garnished attention in the international music scene.

As a result of their newfound popularity, tours and performances in SXSW in Texas, CMJ in New York, as well as various shows in Asia (their most recent tour was as part of a Hong Kong international music festival) soon followed and cemented their reputation as Indonesia’s best-kept secret in the music scene. It was then only a matter of time before they arrived in Europe and sure enough White Shoes And The Couples Company are scheduled to perform in Paris, Cannes and Amsterdam scheduled for late-January and early February 2012. Check out the website of White Shoes & the Couples Company for more info.