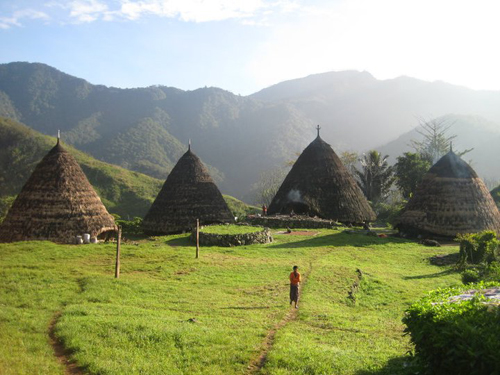 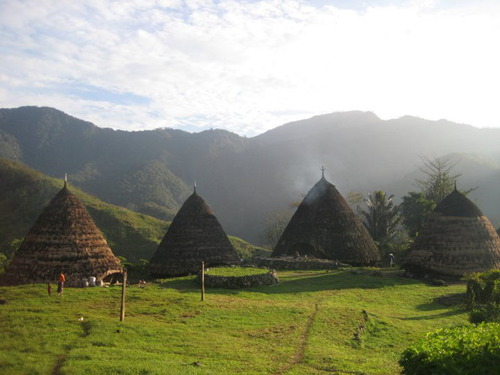 Have you ever imagined living in a house with more than 6 families? Seems a bit crowded and uncomfortable right? Yet, the traditional Manggaraian houses in Wae Rebo on the island of Flores house up to 20 people, in a spirit of togetherness.

Far away from the hustle and bustle of the city of Eastern Nusa Tenggara, there’s a village with seven traditional cone-shaped houses standing in a half-circle formation. Wae Rebo is a part of Satar Lenda Village located in Manggarai Regency, East Nusa Tenggara, Indonesia. This place is something of a tourist hotspot, since it’s the only place which still features mbaru niang, the Traditional Manggaraian House.

Wae Rebo is quite remote and to get there, you need to take a few hurdles. It takes up to six hours by car from Labuan Bajo to Ruteng—the capital of West Manggarai Regency (transportation costs around IDR 60.000/person). From Terminal Mena in Ruteng, you take an oto—traditional passenger truck–to Denge village for seven hours. It’s cheap at only IDR 20.000/person. The Oto is operated twice a week, only on Tuesday and Friday and leaves at 10.00 a.m. 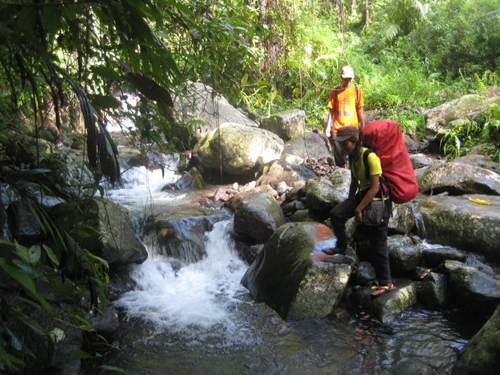 Denge is the gateway to Wae Rebo. You can collect all information about Wae Rebo, homestays, and local guides in the information center and library of Wae Rebo. From here, another journey will begin by trekking through the dense forest, crossing the small rivers the Wae Lumba, climbing up and down steep hills and finally you will encounter the fascinating mbaru niang in the mountains fog. The trek takes 3/4 hours, but is well worth your time.

The village of Denge (Kombo)

The Architecture of Mbaru Niang

According to the locals, this village has been around for over 100 years. Today, it’s the eighteenth generation who lives there. A man named Empu Maro was touted as the founder and the very first resident of this village. He built seven mbaru niang. The larger one is called niang gendang where all the traditional instruments were kept. The other six are called niang gena.

The roof consists of lontar—palmyra palm leaves—and grass. The inner construction is made of wood. Each house has only one door to enter and four very small windows. It is surprisingly cool inside though the sun shines very brightly and the nights are just as warm.

Beside its shape, the uniqueness of this kind of these houses is its five floors, each floor having its own name and purpose. The first floor is called lutur. It consists of the undivided living room on the front side, the busy and smoky kitchen in the middle, and the bedrooms in the back side. People said that the heat of the burning charcoal in the kitchen strengthens the layers of the roof and makes it last longer. The second floor is called lobo and here their crops were kept. The third floor is lentar and served as storage for the seeds. The fourth floor is called lempa rae, used to store all the reserved food. The top floor is called hekang kode home to the offerings to ancestors. 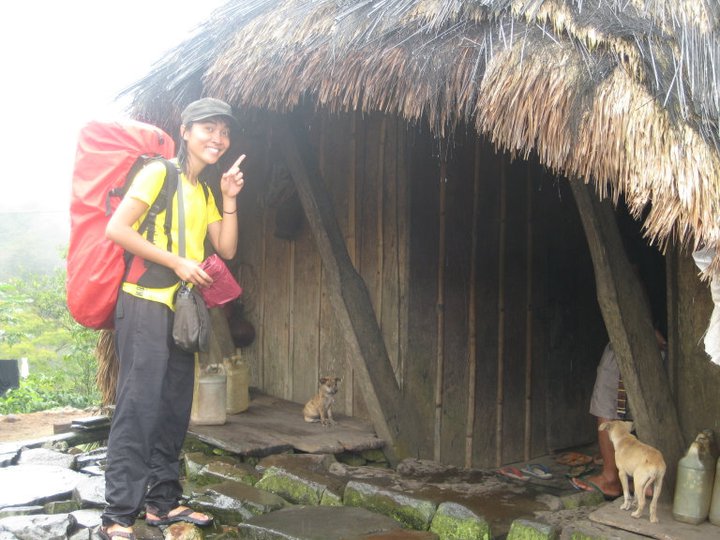 Vistors are welcome, By: Agustinus Saptono

The inhabitants only sleep on the first floor, but the house can be lived in by six to eight families, which means that one dwelling can house about twenty people. It is based on their philosophy that togetherness is the main essence of their culture. Being well-known as good storytellers, Manggaraians are very welcoming when you visit their village, even though they mostly speak their own native language. 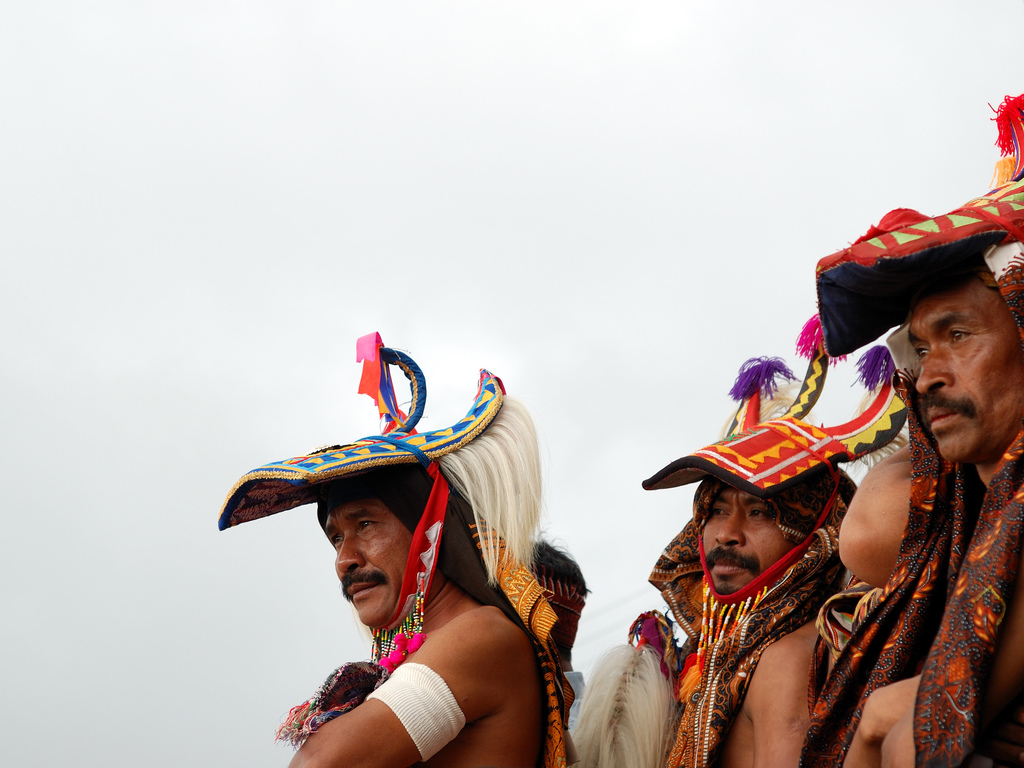 Wae Rebo is very crowded in November. The villagers celebrate Penti as an expression of being grateful to god for the abundant crops and also to pray for the subsequent harvest. Various cultural rituals and the famous Caci war dance are held during this celebration. Joining the locals and being part of the community at this event will be an unforgettable experience in Wae Rebo. 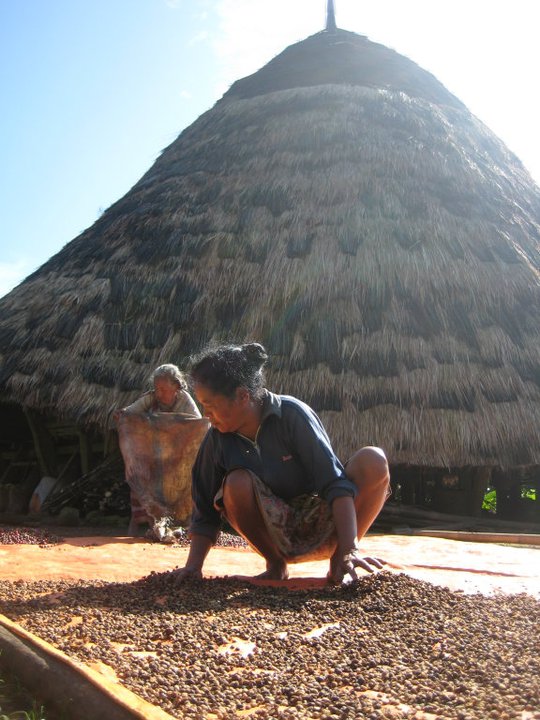 Help out with the coffee beans, By: Lara Shut

Enjoying the beauty of Wae Rebo costs around  IDR.250.000 including a homestay for two days-one night and three meals. In Wae Rebo it is possible to stay in the new Mbaru Niang, collective shelter for guests (from 165.000/pax if more than 10, to 300.000/pax if alone, meals included, shared toilet).

You can also participate in the coffee production or weaving the Songke, traditional clothes of Manggarai. Experience a sense of togetherness and visit Wae Rebo!