The Ubud Writers & Readers Festival 2012 has chosen as its theme This Earth of Mankind: Bumi Manusia, from the title of an epic best selling book by one of Indonesia’s greatest contemporary writers, Pramoedya Ananta Toer. This Earth of Mankind is the first book in Pramoedya’s historical fiction series The Buru Quartet, first published by Hasta Mitra in 1980. The story is set at the end of Dutch colonial rule and was written while Pramoedya was a political prisoner on the island prison of Buru in eastern Indonesia. Pramoedya’s life on Buru was one of deprivation, hard labour and physical cruelty. Denied even the most rudimentary writing implements, he ingeniously narrated the work to his fellow prisoners, who communicated it throughout the prison population. The work was maintained and kept until, after several years, Pramoedya was granted access to writing materials. The enduring power of storytelling will be at the heart of the Ubud Writers & Readers Festival 2012. 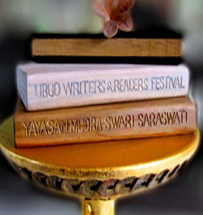 From 3-7 October, an eclectic and staggeringly diverse host of writers will gather together in Bali’s cultural hub to ponder and share the concerns that unite, stir and inspire us all, in a celebration of stories and voices.

Read more about this fantastic festival on the website of Ubud Writers & Readers Festival 2012.