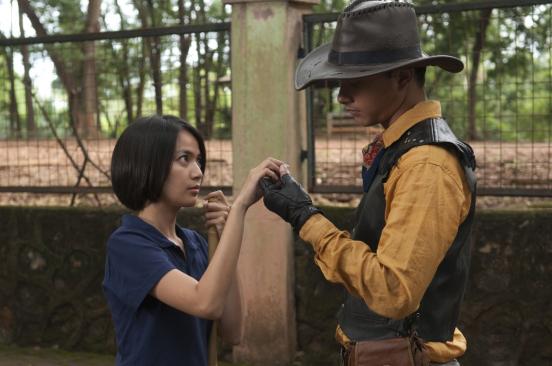 Postcards from the Zoo: A Magical-Poetic Treatment of Uprooted Beings

I have considered living in the zoo, actually, instead of in overcrowded Jakarta.” —Edwin [Press conference, Berlinale Film Festival 2012]

Postcards from the Zoo (Original title: Kebun Binatang) is the latest film from Edwin, one of the most idiosyncratic young directors from Indonesia today. This film sensuously defies every cinematic category that we normally ascribe to a film. But more importantly, it invites you to ask questions that Indonesian films seldom ask about naïveté, the sense of being removed from your natural milieu and the hypnotic effect of magic.

Lana and the wannabe cowboy - Postcards from the Zoo

In the film, Lana is smitten by an elusive cowboy wannabe (Nicolas Saputra) who appears out of nowhere and whose ability to perform magic tricks beguiles Lana. So much so that she becomes his in-training assistant as they escape to metropolitan Jakarta. In the city, they are lured into a seedy massage parlour owned by a businessman and Lana ends up as his prize-winning masseuse. [In Indonesia, massage parlours connote more than purely physical therapy; (oral) sex is part and parcel of the whole deal.] Ultimately, Lana misses the zoo and takes the decision to escape one more time, but this time from a creepy metropolitan underworld, which she could never call home, back to the tranquil Ragunan ‘kebun binatang’ where she finds solace.

How Does It Feel To Be Detached From Where You Belong?

At first Postcards seems to elicit an implicit commentary on the precarious zoo-management in Indonesia. Yet this is not all, as the second part of the film takes us to the urban environment and shows us one of its ugly complexions; one that involves the exploitation of people by people as represented by the massage parlour offering their ‘pijat plus’ spa treatment for men in Indonesia. Perhaps Edwin does not intend to comment on both of these worlds at all. Here I can only infer the filmmaker’s sole intention, which is to fabricate a made-up world in which larger-than-life creatures like the giraffe (the only one in Ragunan zoo), the hippos and the tigers are uprooted from their natural habitat and placed in a man-made institution that sells spectacle as a commodity. 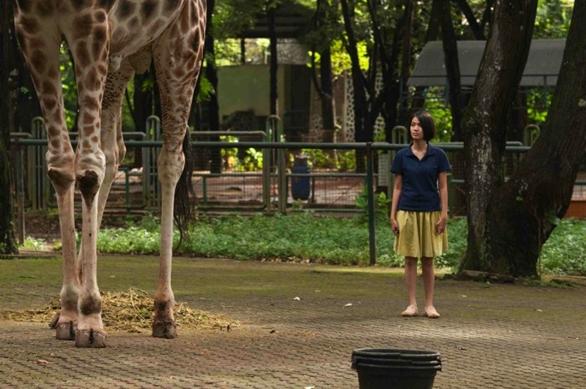 Lana and giraffe - Postcards from the Zoo

Hypothetically, Edwin might want to ask: What if this sense of removal is applied to men? He explores this inquiry rigorously. Lana who was born and bred in the zoo, is subtly forced into the massage service industry that sells instant sexual gratification. This is exemplified by a scene where a spa client instructs Lana to wear a skin-tight leopard costume and condescendingly demands that she should change into the outfit in front of him.

However, the result of this hypothetical exercise is not pretty at all. Lana finds this way of life cold and detached, so she longs for home. As if it was a magical wish, a passenger car from the zoo that usually takes zoo visitors for a tour, shows up in an alley next to the Planet Spa. She jumps on the driver seat and drives away to the zoo. But is life in the zoo any better? Only Lana and the giraffe have the answer.

The films tells its story very very loosely. Postcards is one of those films where locale determines the story, instead of the other way around. During the Q&A session after the screening at the World Cinema Festival 2012, Edwin confesses that his fascination with zoos is insatiable. He is transfixed by the self-fulfilling characteristics of zoo: food, entertainment and greeneries are all available in the zoo. Whenever he travels to different cities, he always needs to check out the zoo in town. Interestingly enough, to him the zoo somehow provides a miniature model of a society wherein the zoo is residing. “You can get a glimpse of what the society is like just from observing how the animals are treated, how the visitors spend their time in there and so on,” states Edwin. 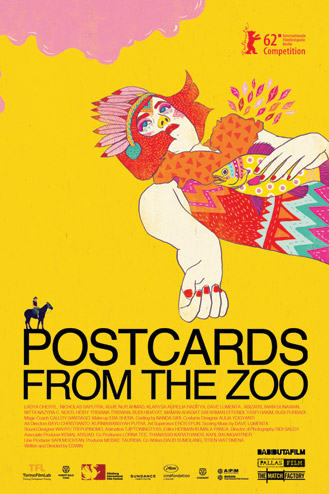 Postcards from the Zoo is screened in cinemas worldwide

If that is the rationale, then what does the Ragunan zoo tell us about Indonesian society at large? Nobody asks this question, but Edwin maybe is not interested in answering this question either, at least not in the film. Because of this obsession with the zoo, the storytelling has quite of a fragmentary form. Unique, but it can work against what the film tries to unravel as a whole. For instance, the title cards with definitions of zoological and environmental science terms such as “Ex situ conservation: removing a species from its habitat” can be a little too pedantic and out of place. However, the visual style, the cinematography that is, provided by the ingenious cinematographer Sidi Saleh compensates the fragmentary feeling with well-crafted camera movement and dampened colors capturing the mood and tone of the Ragunan Zoo as a wondrous place filled with child-like fantasies and whimsical desires.

Overall, Postcards from the Zoo is cerebral but without pretension; it is quirky without being off-putting; it is magic-like instead of dream-like (as most commentators maintain); it is a high achievement in the history of Indonesian cinema where visceral sensations and substantiated feelings permeate the artwork instead of over-the-top sentimentality and predictable plot progression. Let’s propose a toast to Postcards from the Zoo and anticipate what Edwin could take us in his next film!

* Edwin was born in 1978 in Surabaya, Indonesia and studied graphic design at the University of Kristen Petra in Surabaya. He then attended the Jakarta Institute of Art’s film course until 2005. In 2009 he was a guest at the Berlinale with his short film TRIP TO THE WOUND. That same year, he made his feature film debut with BABI BUTA YANG INGIN TERBANG which received the Fipresci Award at the International Film Festival in Rotterdam. KEBUN BINATANG is his second feature film (Berlinale catalogue 2012).

2006 SONGS FROM OUR SUNNY HOMELAND (documentary)

TRIP TO THE WOUND,

2011 BELKIBOLANG, Director of the episdoe ROLLERCOASTER

2012 POSTCARDS FROM THE ZOO