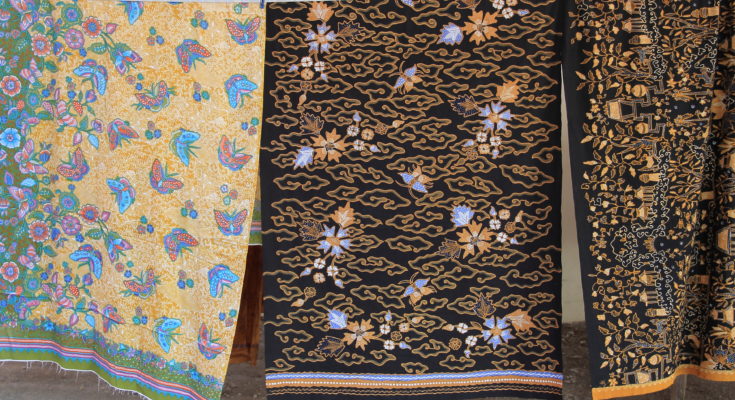 All Cirebon’s Batik is originated in the village called Trusmi, named after Ki Gede Trusmi, a man who introduced the art of Batik to local people while spreading the teaching of Islam in the 16th Century. Today, Ki Gede Trusmi remains very highly honoured by the local inhabitants. His tomb is well preserved and every 4 years, the Trusmi villagers conduct a ritual called Ganti Welit and Ganti Sirap (changing the roof of the tomb). Today, the village has become the central of Cirebon’s Batik industry where we can find many traditional craftsmen and shops. 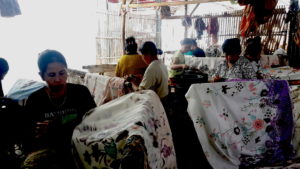 The pattern of Batik Cirebon is the result of a perfect collaboration between religions, arts, cultures brought by various ethnics and nations in the past. As a major trading hub during 14th century, Cirebon attracted foreign traders from China, India, Middle East and Portuguese, which later enriched a mixture of diverse cultures and produced many new traditions such as Cirebon Batik.

Unlike other Batik producing-regions that feature one distinct style of Batik, such as Batik Keraton (Royal Batik) for Solo or Pekalongan that focuses on Batik Pesisir (Coastal Batik), Cirebon fuses both styles of Batik. Cirebon’s classic royal batik style has also been developed by the Royal Palaces (The Kasepuhan and the Kanoman Sultanates), while the coastal batik emerged from trade and fishing communities who brought their own motifs and style. Royal batik Cirebon is characterized by motifs of royal symbols based on religious philosophy, while coastal batik Cirebon is more dynamic and open to current trends such as shrimp, fish and flower motifs. Commonly, batik that comes from the palace is dominated with dark colour, such as black, dark red, and brown. Meanwhile, coastal batik has bright primary colours, such as blue, green, and red. 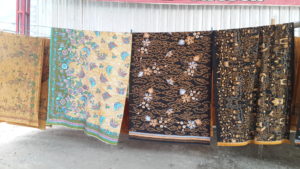 In general, the ornaments of Cirebon’s batik can be classified into 5 groups: Wadasan, Geometric, Pangkaan (Buketan), Byur, and Semarangan. Wadasan is the classic ornament of Cirebon batik that mainly highlights the royal batik style. The motifs of Wadasan are among the most renowned of Batik Trusmi that include the Mega Mendung (Clouds); in the form of clustered white clouds. This motive means that every human being must be able to reduce emotions in any situation and must be able to protect others. Meanwhile, the Mega Mendung batik colour has seven colour gradations, the meaning of which is taken from the layers of the sky, which has 7 layers, like the earth, which is composed of 7 layers of soil, and the number of days in a week. All the motives have a deep meaning despite of its simplicity. 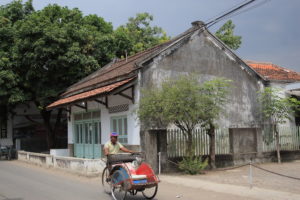 Together with the impressive architecture, its easy going atmosphere, Cirebon is a rich city with a history going back to the glory days of Javanese Islam. Too bad it’s almost forgotten.

The Pangkaan is also known as Bungketan ornaments feature floral variations such as trees or flowers. Motifs included in this ornaments are Pring Sedapur, Kelapa Setundun, Soko Cina, and Kembang Terompet. The Byur is highlighted with flowers and small leaves that completely fill the textile with motifs such as Karang Jahe, mawar Sepasang, Dara Tarung, and Banyak Angrum. The Semarangan Ornament features repetitive motifs placed in certain patterns. The motifs of these ornaments are called Piring Selampad, Kembang Kantil, and more.

TAGBatik Cirebon
Previous Post Muslims in Indonesia. A majority with a minority mentality
Next Post Community-Based Ecotourism in North Sumatra