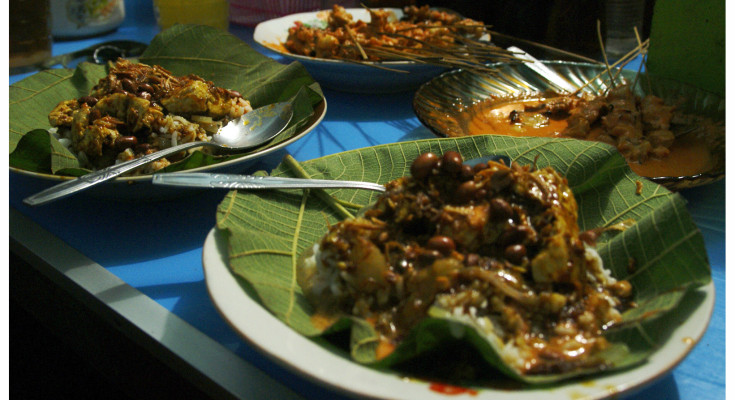 Rembang is the name of one of Central Java’s northern districts, as well as its capital. Getting here from Central Java’s capital of Semarang normally takes a 2.5 hours on a motored vehicle. Visiting Rembang for the first time, I let my local friend take me to some of the town’s simple eateries serving the district’s distinct delicacies.

Among the town’s must-try food is nasi tahu, which literally translates as rice and tofu, and is usually enjoyed with srepeh satay. There are two only two warung, or eateries, in Rembang Town where the two are served: Warung Pak No and Warung Bu Slamet.

The first is tucked at a shaded corner next to a Chinese temple in front of an old swallow house in Rembang’s pecinan, or Chinatown. Open in the morning and at night, Pak No and his wife dish up a sweeter kind of nasi tahu than the one at Bu Slamet’s, which is situated on Jalan Wahidin. The tofu in nasi tahu is moderately ground in a mortal vessel together with cayenne pepper, tamarind, and salt. This mixture is then poured on top of warm rice served on a piece of teak leaf. The final touches to the dish are a sprinkle of beansprouts and a dash of lodeh dressing made from boiled vegetables.

But nasi tahu is not complete without srepeh satay. Unlike most satay, srepeh satay’s strips of either the meat, skin, or coagulated blood of chicken are not grilled but steamed, and the sauce is made of basically coconut and cayenne pepper. The name “srepeh” refers to the flat shape of the chicken meat strips on the stick.

Another special delicacy from Rembang — from Tuyuhan Village, Pancur Subdistrict, to be exact — is lontong tuyuhan. Said to be what the villagers used to peddle out to paddy workers on their farms, lontong tuyuhan is now famous all over Rembang. But, as one seller put it, the real one can only be found at the village of Tuyuhan, because it is the village’s sources of water used in the concoction that gives it the original taste.

Wherever the water comes from, the lontong, or rice cake, in this food comes in a cone shape and has the distinctive aroma of pandanus leaves. It is served with chicken opor and its yellowish sauce of coconut, candlenut, cayenne pepper, bay leaf, lemongrass, cumin, and other spices. Sellers of lontong tuyuhan usually only hand a kendi, or terracotta jug, of water for customers to wash down the meal.

On my last day in Rembang, my friend brought me to Bu Warsih’s warung on Jalan Rembang-Blora to try kelo mrico, a dish using saltwater fish as its main ingredient. Any kind of saltwater fish can be made into kelo mrico. However, it is recommended to use salwater catfish for the firm texture of its meat, making it durable during its long simmering in various acidic fruits as well as rich spices including onion, turmeric, tamarind, galingale, and cayenne pepper.

For a taste of local drink, look for kawis juice. Kawis or kawista is a relatively scarce fruit that can be found around the hilly areas of Central Java’s northern coast. Tasting somewhat similar to cola, the sour fruit is often referred to as the Java Cola. When it is in season, it is usually turned into syrup, jam, soda pop, snacks, and numerous refreshing drinks including the kawis juice.