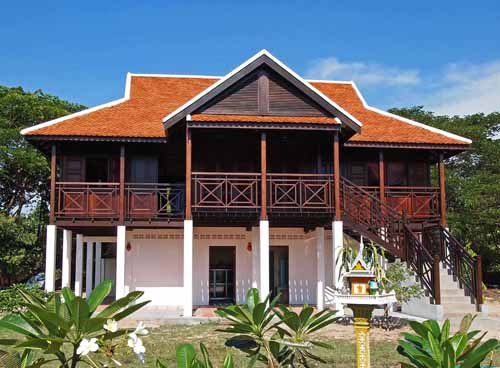 My House in Cambodia

Thomas Weber Carlsen is a Danish architect and industrial designer who has been living with his family in Siem Reap, Cambodia for more than ten years. My House is the last of three articles to appear on latitudes.nu. All articles are excerpts from chapters of his recently finished book Third World Man (Out of Denmark), which he is now looking to have published. You can read more about Thomas and his adventures on his website http://www.angkor.dk

My House by Thomas Weber Carlsen

There is something soothing in the air of this country which stimulates a desire for making art and other things aesthetically pleasing. S’aard means beautiful in Khmer, the Cambodian language, and that is one of the most frequently used and certainly most popular words here. These people are obsessed with the notion of s’aard to an extreme degree, and I believe that it has had a very significant influence on my ability to create good and visually impressive architecture.

I love to design buildings in this tropical climate with the use of the local hardwoods, which must be the most luxurious in the world. But also with the use of much more humble and prosaic materials such as bamboo, straw mats, concrete or iron. It is the combination of these materials and their correlation with the natural surroundings – the lush tropical flora – that produces truly magnificent results. When I see good architecture I wish I could eat it, and that surely must be the ultimate perversion.

I was less than a mediocre student at the school of architecture in my hometown Aarhus. At the end of one year during our evaluation, my teacher sat opposite me at a table looking sadly at me and shaking his head. He didn’t say much, I suppose he didn’t have much to say. Another of those abortive years I remember myself one day sitting in the class, staring vacantly in front of me and literally feeling grey ashes falling down upon my head. Somehow I got through it though, more dead than alive.

But slowly over the years in Cambodia, I have come to realize that there may have been a fertile seed planted inside of me after all. And these days, nurtured by our exotic existence here, I find myself evolving into a full scale architect.

It all began with those 120 by 80 meters of untamed Cambodia I had been reckless enough to buy back in 1995. The first house we built there was a one story brick building, four by eight meters on a bare open field, after we had bulldozed the whole parcel flat and got rid of most of the snakes, scorpions and termite hills. Then we built a well and a simple wooden bathroom. 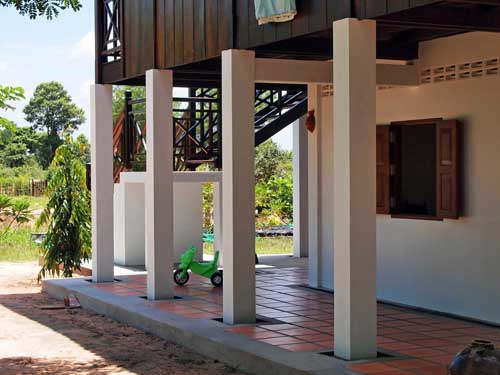 My House by Thomas Weber Carlsen

These were truly pioneering days without any luxury whatsoever. We didn’t live here permanently then but had a Cambodian family looking after the place when we were away on video projects or the like. The place looked kind of spooky, a sun stricken open field. After a while the wife nearly went crazy because of the quiet and because she feared the ghosts who for some reason are always attracted to such desolate places, and so they left again. Whenever we came back, we planted trees. Shade is essential in this climate and we must have planted a thousand trees. Some lived, some died, and some are now ten meters or more in height. This went on for a couple of years and then Chan became pregnant. Something happened to me then too. I felt a desire to build a home.

How I found the money I really don’t know, I was never good at budgeting. This is one of the mysteries of our Cambodian life. We live privileged upper class lives here on a budget next to nothing. When I left Denmark I had sold most of my valuable belongings there, and my father has contributed with considerable amounts over the years. Once I got lucky with a land transaction here in Cambodia during the boom years of the first decade of the new millennium and I scored a huge profit. But when people ask me what this place has cost I simply cannot say, although I am pretty sure it must be quite a lot. Somehow we have managed to build it though, moving ahead when the money was there and stopping when it was not.

It was a magic time when Chan’s stomach grew and we didn’t know what was inside it. I had asked not to be told the gender of the fetus. We lived in an apartment on the outskirts of Phnom Penh, and I started drawing the early sketches to the big house there. I remember them well. I had two ideas that I wanted to incorporate into the overall design. One was to use in a central place the great table which I had had made out of one solid plank of the finest of all the Cambodian hardwoods. Dark red and with black grains running from one end to the other, it measures 200 by 120 centimeters and weighs two hundred kilos. The other idea I got from a hotel in Battambang I once stayed in while visiting Chan, with corridors running right through the middle of the building, providing a wonderful coolness to the place.

Then there was the Apsara Authority to be considered. Ours is not a normal neighborhood, it is part of a vast protected buffer zone around the Angkor temple complex, supervised in union between the royal Cambodian government and UNESCO to guarantee the future of these extraordinary monuments officially designated as a world heritage site. There are very strict rules regarding the use of materials and designs for any kind of structure to be erected here, and you have to go through an elaborate application process to be considered eligible for approval. Everything must be in strict accordance with the Apsara guidelines and based on the traditional building culture of Cambodia. I took that as a challenge and began to study the local building techniques which I wanted to combine with something much more recent and from my own part of the world – my Danish heritage. 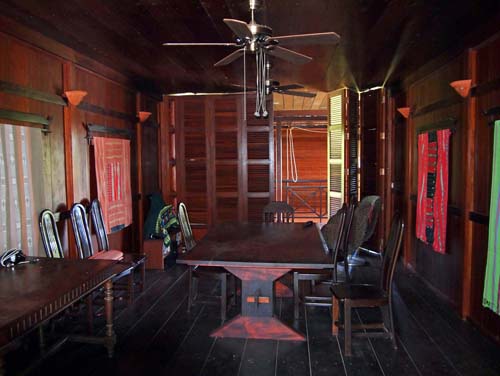 Interior of My House by Thomas Weber Carlsen

The richness of the glazed orange dragon scale roof tiles in combination with the soft darkness of the woods and their contrast to the cool hardness of the white concrete surfaces, these are the defining features of my house as it stands today, together with an attention to all details and a general preoccupation with shade and airiness.

I built most of it out of korkee, a local hardwood known for its durability and resistance to water, traditionally used mainly for boat building. The locals say that a house built of this wood can last a hundred years and I wanted mine to last for two. The Cambodian forests are vanishing fast, and within the last two decades local hardwoods have become rare and expensive due to resilient illegal logging and clandestine exports. I will never get a second chance to build a house such as this again, and so it will have to last not only through my lifetime but through that of my children’s and their children’s as well. Therefore I have used virtually no nails and only a very few screws that do not easily rust. The building is held together with dowels out of the same korkee it was built from.

I wanted to preserve the wood not only in a good condition for the next couple of centuries but also looking its very best, so I did a lot of research into wood oils and treatment, something which the locals have failed to master, and consequently their own wooden houses become a dull grey almost immediately. 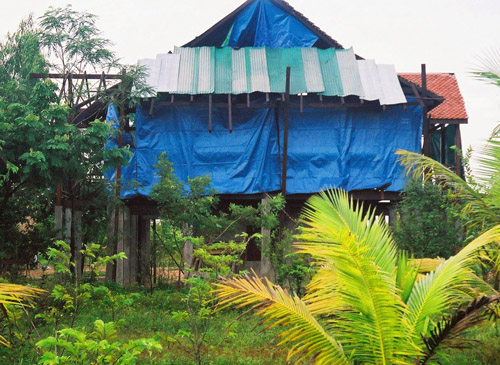 I remember the intense heat of the first dry season when we were putting up rafters for the roof, hanging nine meters up in the air under a burning April sun. It was murder. Then the rains came and we went to Denmark and the house was covered in blue tarpaulins and tin plates making it look like a squatter’s makeshift residence, and when we came back there was water everywhere inside the building. The next dry season we finished the roof and the floors and most of the walls, and then we moved in. There were no stairs yet, and every evening I would take Amanda on my back and climb up a long ladder to our bedroom on the top floor. The third season we managed to get the front stairs done and a few other things and then the work stopped for a long while. The fifth season we got the back stairs and the bathroom up and running and had electricity installed. Then we painted the concrete parts white, and the work on the main house was finished.

Building my own house has taught me a valuable lesson about what can be accomplished with the right kind of determination under the right circumstances. There was a window of opportunity that I seized because the motivation was there. It has been a deeply fascinating process to go through, and now that it is completed I feel richer and fuller than ever before. When an old Cambodian lady I know recently told me, “this is the kind of house I see in my dreams”, I knew I had gotten it right. To inhabit this house and to live and grow with it, to see how my family settles in and uses it, that is a profound satisfaction to me.