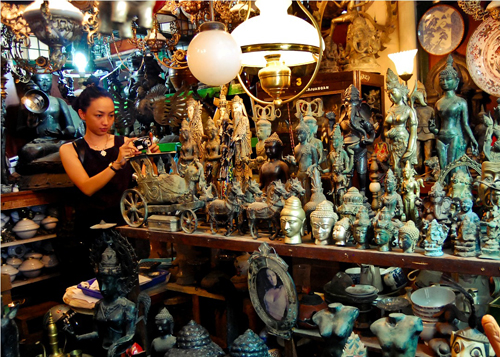 How to Capture the Artefacts by Hafitz Maulana

As an eternal rival of Yogyakarta, Solo or Surakarta is arguably the epicenter of Javanese identity and tradition along with Yogyakarta. Both cities share many similarities, but if we look deeper, Solo is more westernized than Yogyakarta. This 44-km² city can be explored with at least on overnight visit. This city famous for its batiks offers an elegant keraton (Royal Palace), backstreet kampongs, traditional markets and gleaming malls. Solo is an excellent place to witness the traditional performing arts and a great place to buy traditional crafts.

It was at the Giyanti Treaty when The Mataram Kingdom was divided into two: Surakarta, which was close with the Western powers and Yogyakarta, which remained relatively independent. The influence of Western culture can be seen from the Panggung Songgo Buwono inside The Kasunanan Surakarta or Keraton Surakarta. The Keraton also boasts the Sasono Sewoko Museum, which preserves ancients artifacts such as silver and bronze of Hindu Javanese figurines, weapons, antiques, and portraits of the royal heirlooms.  Istana Mangkunegaran, which is located behind the palace, can also be visited. This is the living quarters of the members of the aristocratic family. Several traditional ceremonies or Javanese music and dance practices can also be seen at the pavilion of the palace.

Solo also has the Radya Pustaka Museum which is located on Jl. Slamet Riyadi. This small museum has an impressive display of gamelan instruments, Kris’s, puppets, a small collection of wayang, and Rajamala (the King’s ship).

Batik and the Largest Batik Market in Indonesia 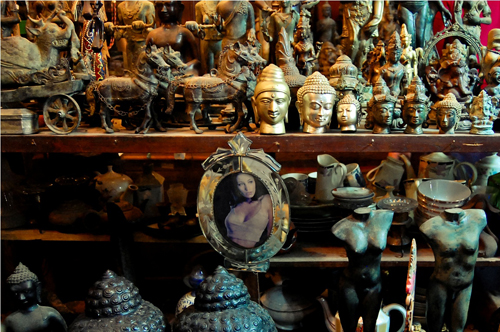 The heads of Buddha and The Modern Woman by Hafits Maulana

Since 2009, Batik was acclaimed as a “Masterpiece of Oral and Intangible Heritage of Humanity”. This appreciation over Batik put Solo on the proverbial map. This city has renowned areas such as Kampung Kauman or Laweyan that are the homes of traditional batik merchants. Three of Indonesia’s batik manufacturers; Batik Danar Hadi, Batik Keris and Semar are also based in Solo. For those who want to see the batik collections, they can visit the Danar Hadi Museum on Jl. Slamet Riyadi. This small museum that boasts a large batik collection collects antiques and royal batiks from different cultural influences such as Javanese, Chinese, Indian, and colonial Dutch.

Going to the west of Kasunanan Surakarta Royal Palace, travelers can find the largest batik and textile wholesale center in Indonesia, Pasar Klewer (Klewer Market).  For people who love to shop, Pasar Klewer shouldn’t be missed. From the kebaya (traditional Javanese female garment), batik shirts, fabrics, formal clothes, blouses, as well as kid clothes, all are inexpensive and can be bargained. 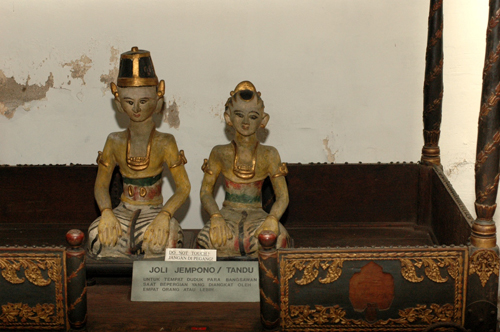 It should be noted that Solo has one of the most famous flea markets in Indonesia. Triwindu Market (now named Windujenar Market) is a heaven for antiques and boasts many treasures from royal heirlooms. This market has many collections of old bank notes and coins, batik stamps, bicycles from the 1930s, and artefacts claimed as the fossils from Sangiran. Subsequently, the market also features old paintings, jewelries, Buddha statues and coal iron. Triwindu Market is truly the best place for Javanese treasures hunters.

After exploring Solo, Yogyakarta can be the next destination. Visitors can take a train or travel by car (approx. 1 hour). Borobudur Temple, as the largest Buddhist Temple in the world, also can be reached from Solo. Also, to witness the UNESCO World Heritage Site and and archeological treasures, Sangiran Early Man Site should be visited. This site contains the skeleton of Java Man (Pithecanthropus Erectus). Prambanan Temple, featuring a large set of Hindu Temples lays only 50 km away from Solo. And finally, a hill station, Tawangmangu, is located on the slopes of Mount Lawu would also be a significant point of interest.