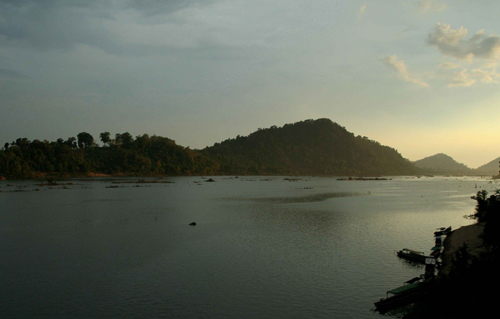 Si Phan Don or the 4,000 Islands are nestled in the Mekong River in the Champasak Province of Southern Lao (Laos) near the Cambodian border. Whether or not there are actually 4,000 islands is unclear, but three principal islands cater to tourists with others remaining largely free of visitors.

The ‘happy pizza’ laidback atmosphere and the offering of numerous side trips from local travel agents make this place the quintessential youthful budget traveler destination. Chartered long tail boat trips to other islands and waterfalls can be arranged but are fairly pricey. A cheaper option is to hop on a sunset party boat. One-day kayak trips are also available, and inner tube trips upriver would cost around 30,000 kip. Rented bicycles make for a convenient mode of transportation to explore the surrounding islands, since all of the islands are connected by ferries (10,000 kip for short crossings, price includes motorbikes and bicycles). There is also a small beach on Don Det, but it is often crammed with boats and ferries docking and unloading. History buffs can view the remains of the French-built port near the island’s school. 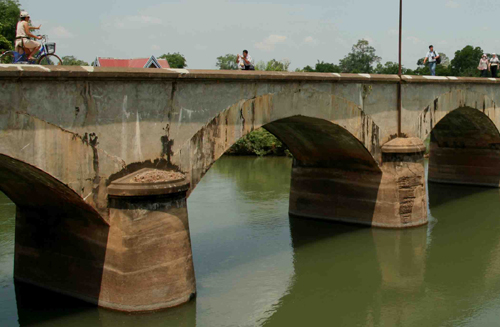 Directly south of Don Det and connected by a concrete arch bridge (20,000 kip, but if staying in Don Khon it should be free), Don Khon offers a number of activities and has superior natural beauty. Given that a bridge connects Don Det and Don Khon, they can more or less be considered as one island. However, the guesthouses cater to a quieter and more refined clientele on Don Khon. The bike path on the island is in great shape, since it is built on a railroad bed. To learn about the French attempts to bypass the waterfalls in the area, check out the two old railway locomotives and read the historical panels surrounding them. There are also several French colonial buildings remaining on the island. From Don Khon, one can visit Somphamit – Liphi Waterfall (20,000 kip). Attempting to view dolphins from the island is popular but sightings are rare and happen quickly with just a glimpse of a dolphin head. Tickets for long tail boat rides to the dolphin pool (30,000 kip per person) are sold at the southern tip of the island with trips lasting approximately one hour. However, the drivers may get impatient and take people back to shore after only 30 minutes. There is also the very charming beach of Hat Xai Kong Nyai on Don Khon where people can swim in a natural pool, jump off rocks (do be careful), and explore other rocky islands close by.

Sunset Near the Dolphin Pool on Don Khon by Isaac Olson

This is the largest island in the area and the only one with a paved road encircling it. Even though the road is paved, there isn’t much traffic, making it great for cycling or motorbike touring. Other travelers are present, but locals are often quite curious when they see outsiders away from the ferry-landing site. Exploring the island is a good way to observe Lao agriculture, which consists mostly of rice, but tobacco is also grown here and the island is well known for its palm sugar candy. Tours can be arranged to Don Det and Khone Phrapheng Falls. A ferry (10-15,000 kip, price should include motorbikes) runs to the island from the passenger ferry landing off the highway. There are a number of places to stay and unlike the other islands; Don Khong offers a bank and ATM facilities. The Don Khong District Museum is housed in a French colonial building near the passenger ferry-landing site. Also nearby is an excellent outdoor restaurant, Nongnoi. that can be identified by its Beer Namkhong signs. 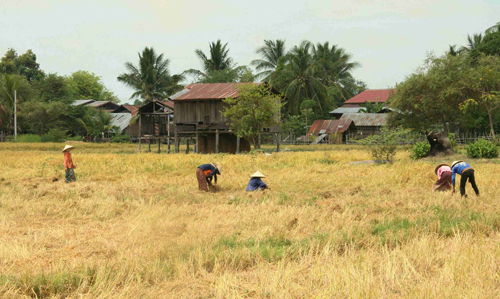 Don Som – Off the Beaten Path

The word “path” actually describes this island well, since the only way to cross it is on a dirt path. Actually, it turns into a single-track dirt rut at times. This is the place to really see rural life in Laos. Agriculture and fishing are the only industries on the island, and they are still done quite traditionally. Water buffalo might block your path from time to time, but don’t worry, they are quite docile. This could actually be a good opportunity to take a splash in the river with the beasts to escape the heat. You might even get to see a long tail boat being crafted by hand, and children especially are quite curious when they see foreigners. The island can be reached by short ferry crossings (10,000 kip) from Don Det or Don Khong. Exploring the island on bicycle or motorbike is the best option. 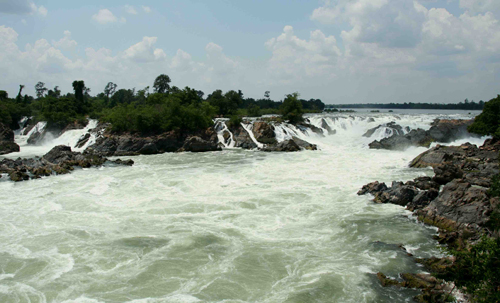 A must see on any visit to Si Phan Don, these cataracts are the largest by volume in Southeast Asia. In reality, they resemble large rapids more than waterfalls. There is a viewing platform for a good photo opportunity. But, one can walk down closer to the falls to really feel their power by traversing some nearby rocks. Entrance to the falls is 20,000 kip.

Many travelers through mainland Southeast Asia skip Si Phan Don. However, visiting the islands is a worthwhile way to get off the main tourist track without getting into overly remote country. Add Si Phan Don to the itinerary of that Southeast Asian adventure to get a unique Mekong experience.