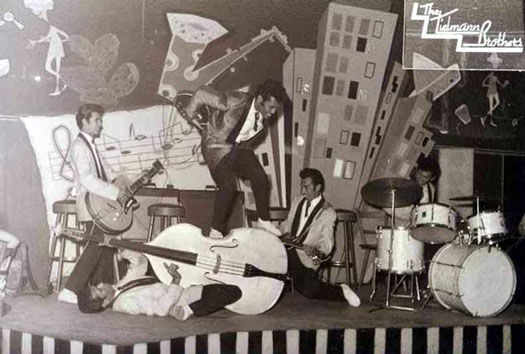 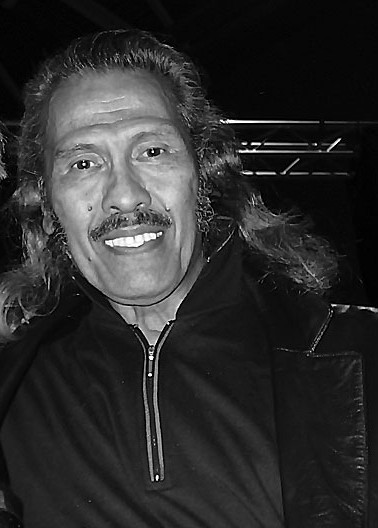 Andy Tielman died this Thursday (10-11-2011) of gastric cancer. Andy formed a quarter of the legendary Indorock band the Tielman Brothers.

Known more in Europe than their homeland of Indonesia, the Tielman Brothers were pioneers of rock n’ roll as much as Elvis, Chuck Berry and Gene Vincent were in America. Moving from Indonesia in the late 1950s along with other hopeful musicians they formed part of the Indorock explosion in Europe along with The Crazy Rockers, Oety & his Real Rockers, Electric Johnny & his Skyrockets and many more, but marked themselves out as a unique force with their highly developed stage tricks and inventive playing techniques.

Encouraged by their father Herman, a captain in the KNIL (Dutch-Indonesian Army) and a keen musician, all four brothers: Andy, Reggy, Loulou and Ponthon plus their sister Jane were playing as group by the age of 10 in Surabaya. 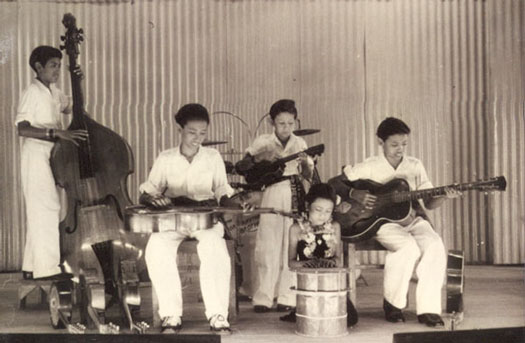 Apart from playing the traditional style of Keroncong (influenced by The Portuguese guitar music brought to Indonesia in the 16th century and characterized by question and answer phrases on guitars), they were very musically advanced and were known to play traditional jazz and ragtime music in their repertoire too. These styles as well as Hawaiian and early electric guitar music such as Arthur Smith’s ‘Guitar Boogie’ and Les Paul would feature in their style of rock n’ roll and contribute heavily to their playing and compositional styles. Known as the Timor Rhythm Brothers they were already touring Indonesia with other bands in 1948.

In 1949 they were playing in the royal palace of president Sukarno in Jakarta and the now new independent Indonesia. By the mid 50s they were playing rock n’ roll in Jakarta and were ready to embark on an extensive tour on the condition they changed their Dutch nationality, but their father had different ideas. Whether the decision to move to the Netherlands in 1957 was commercial or due to their father’s loyalty to the Dutch regime is unclear, but it was certainly a positive one for the band. They changed their lineup to just the 4 brothers and their name from The Four T’s to The Tielman Brothers.

The Tielman Brothers land in Europe and Gather Fame

After humble new beginnings (staying in a boarding house, getting used to the colder climate and playing to earn money for their new Egmond guitars and amps), they won over the music scene in their new home town of Breda. They quickly built a fan base and were employed to play in Belgium at the Brussels world fair in 1958 where their highly energetic stage acrobatics were unprecedented in performance at this time in central Europe. The show gave them enough exposure from the attention they received to attract the interest of a Belgian manager. By this time their stage show had advanced into a dazzling array of tricks and impressive playing techniques along with a raw sound and style of rock n’ roll that was all their own.

‘Rock Little Baby of Mine’ was the first ever Dutch rock n’ roll release and along with their wild performances proved too much for the Dutch public at that time, even prompting the accolade ‘musical rapists’ in one news article. They found they could make more money playing in Germany, so that by the early sixties they were both financially successful and well known with TV appearances and national press. Paul McCartney and George Harrison saw them on their first tour as the Beatles in the early 60s and were inspired by their stage craft and influenced to use a Hofner violin bass which became Paul’s trademark. German label Imperial/Bovema signed them in 1959 and released hits such as ‘Record Hop’, ‘My Maria’ and ‘Black Eyes’.

’18th Century Rock’, a reworking of Mozart’s Piano Sonata in C major shows that although they were raw and stripped down their musical pedigree also shone through:

Andy’s vocal dexterity shone in songs such as ‘I Can’t Forget You’:

…and their later hit ‘Little Bird’, from 1967, which by this time was a top ten hit in the Netherlands.:

Other pieces such as ‘Java Guitars’ an arrangement of ‘Guitar Boogie’ and Sari Nande from the late 70s show Indonesian influence and a hybrid of the pentatonic (5 note) scale typical of Indonesian music with the rock n’ roll blues scale and 12 bar structure:

Here is an infamous performance on Dutch television from 1960 which received criticism. ‘Rollin’ Rock’:

And not to forget ‘Black Eyes’, which suggests plenty of sexual intensity:

Andy Tielman developed a unique guitar style, stripping down his advanced technique and finding numerous possibilities for playing positions, including behind his head, with his feet, and plucking the strings with his teeth, reportedly the first person to do this in a band and over 5 years before Jimi Hendrix became famous for doing it! Raw energy and attitude took precedence over melody or technique. The rest of the band were as much a part of this with Ponthon playing his double bass horizontally on the ground whilst Andy jumped on top of it with his guitar and Loulou playing his drum kit whilst walking all the way around it and also playing Andy’s guitar with his sticks.

The Tielman Brothers in action

They started using Gibson Les Pauls after their Egmond instruments got burnt in a fire (which resulted in them missing a performance on the Ed Sullivan show where they might have broken the American market). After that the Fender Jazzmaster took over, first used in 1961 and lighter than the Les Paul so better for stage antics, its use was influenced by the Ventures, a U.S surf band. After a car accident in 1963 where Andy spent 4 days in a coma and severely broke his arm, new guitarist Alfons Favery joined and Andy concentrated more on vocals and developing a new guitar and sound. This involved him adding 4 banjo strings to his Fender Jazzmaster creating an unusual and bigger sound which became influential in Indo rock and as a result of this the development of a 9 string guitar by Vox.

In 1966 he used the Vox guitar organ which could reproduce organ sounds and other effects which was, and still is, very rare! And also a Vox electric 12 string mandolin guitar in the 70s. 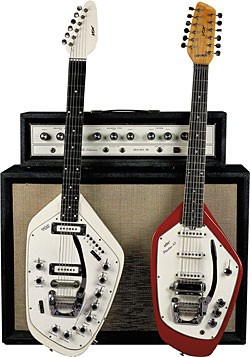 The sound of the band was also unique and unusual by today’s standards. When they were using Gibsons circa 1959 they tuned down three whole tones to produce a lower and looser sound. Then with the 10 string Fender Andy tuned down two whole tones to get a deeper sound than the Rickenbacker 12 string which became popular with bands such as The Beatles and The Byrds.

Andy’s guitar signal was also put through the bass amps and PA along with the use of 2 Fender VI basses or baritone guitars, one with lighter gauge strings played by Reggy and one with heavier strings played by Robby Latuperisa circa 1964. Their stage sound was reported to be outstanding and better than on their records.

Despite some small U.S releases in the mid 60s they never made it across the pond, partly due to missed opportunities and bad management. Had they done so, perhaps they would have achieved far more recognition as pioneers of rock n’ roll, rockabilly, surf music, vocal ballads who helped point the way towards the beat combos and guitar lead rock of the mid and late 60s such as the Beatles and Jimi Hendrix.

After the popular beat explosion of the mid 60s, rock n’ roll had a tough time surviving and the many line up changes and gradual decline of the band reflect this. This along with style changes affected the band’s ability to impress and make hit records. However their later output has some impressive moments and their formidable abilities and inventiveness helped them to survive into the early 80s.

Their sister Jane rejoined in 1963 and toured with them frequently. 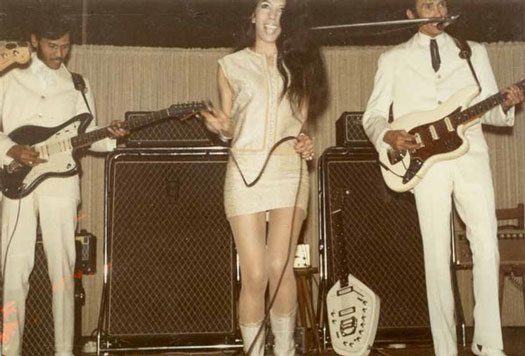 Their popularity in the Netherlands began to grow by the end of the 60s and they influenced Dutch bands such as Golden Earring and Focus.

The pressures of success started to affect front man Andy, in particular instances of women cutting their wrists whilst he was playing to get his attention. By the 80s he had left his family and fortune to live in the jungles of Borneo with an indigenous tribe. A female German fan tracked him down and persuaded him to return to music and civilisation where they got married.

There was a resurgence of interest in Andy’s music in the late 80s when he started touring again to support his new family and to honour his brothers (and sister) who all passed away between 1990 and 2000. His warm reception by European audiences shows how powerful the original music was and will hopefully help to encourage more wide spread knowledge of this important and influential band.