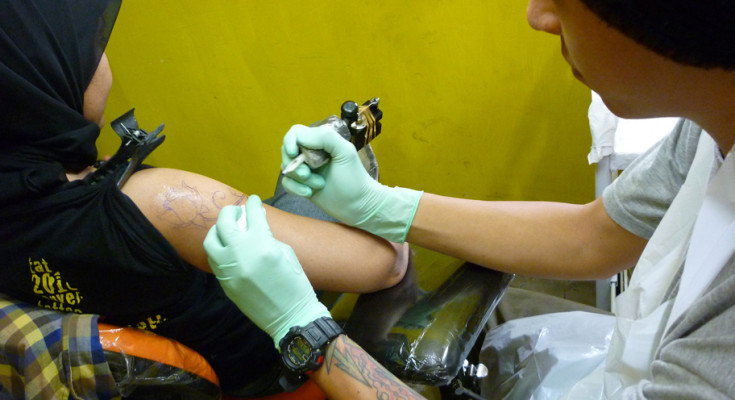 Indonesia has a long history in tattoo cultures and traditions. The Mentawai tribe, who refer to tattoos as titi, are considered to have the oldest tattoo tradition in the world. On Borneo, the traditional hand tapping style is still practiced among the many Dayak tribes on the island.

Watch this video of renowned tattoo artist Durga, performing a custom hand tapped forehead tattoo. Probably not to everyone’s taste, but artful it is!

From Tattoo Tradition to Taboo

Despite the tattoo tradition in tribal cultures such as the Mentawai, Dayak and other tribes in various parts of Indonesia, tattoos over time have become somewhat of a social taboo in modern day Indonesia. Under the influence of conservative religion on the one hand, and modern values on the other, tattoos became outdated and are sometimes considered deviant from mainstream values.

Tattoos have also been portrayed as criminal. Back in 1980s a series of mysterious killings of thugs with tattoos took place. Several street thugs were mysteriously shot and their bodies were exhibited in public places. This event, known as PETRUS (Penembak Misterius – the Mysterious Shooters) placed a huge stigma on people wearing tattoos in Indonesia.

Indonesian Tattoos as Part of an Identity

Thirty years later, Indonesia’s younger generations wear their tattoos as part of their identity. Many of the Indonesian tattoo artists see the art of tattooing as a movement against the stigma of tattoos in Indonesia. Attempts to revive the traditional tattoo traditions also exist. Yogyakarta as the center of art, culture and education is one of the places where the Indonesian tattoo scene has flourished in the past decade. Here is a guide on where to get your tattoo when you find yourself in Yogyakarta. These are all professional tattoo parlors that adhere strictly to hygiene and safety guidelines. 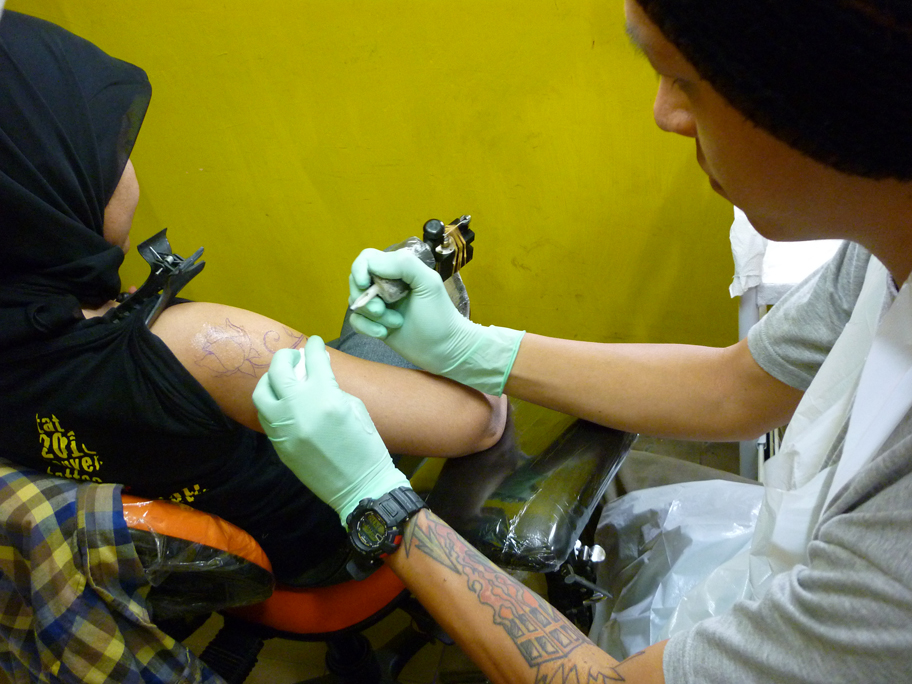 Located in the middle of Yogyakarta city. TOXIC is one of the first established tattoo studio in town, up and running since 2000. It is run by a husband and wife duo, Munir (the artist) and Ajenk (the manager). Their client base had grown significantly and Toxic caters to a lot of travelers and tourists as well as locals. They tend to discuss designs with the client (which sometimes can take weeks) in the process of deciding and creating a tattoo that fits you.

Although they also offer laser service to remove any unwanted tattoos, TOXIC obviously does not want their clients to regret their tattoo. As one of the established tattoo studios in Yogyakarta, TOXIC also provides tattoo supplies for other tattoo artists. TOXIC wants to create a good and positive image for tattooed people. They want their clients to have a emotional, psychological and spiritual relation with their tattoo. They believe that tattoos are a way of life and a part of a person’s identity. 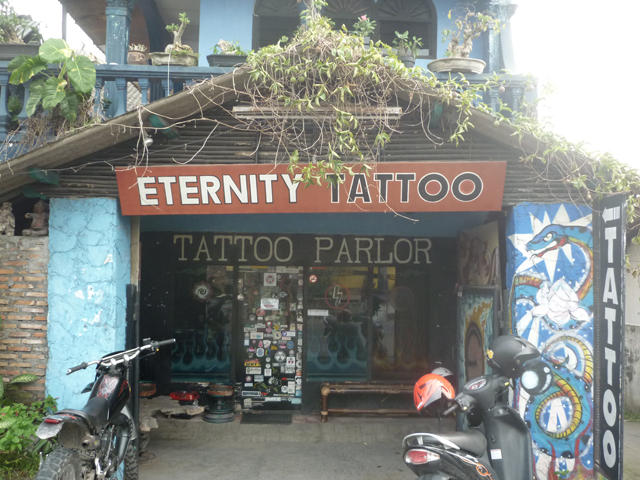 ETERNITY is located in the northern part of Yogyakarta, in a busy student area, near two major campuses, the University of Gadjah Mada and the University of Yogyakarta. The studio started in 2002, going through a dynamic process, joining with partners and apprentices (including a female tattoo artist). Agung’s work focuses on oriental style tattoo designs. Although currently Agung is going solo in his studio, he is always very open to new partnership and apprentices.

HITAM established in 2002. The owner Dewo used to go door-to-door as a tattoo artist. The name of the studio itself (Hitam means black) represents the dark theme that tends to dominate Dewo’s tattoos. The other artist, Ali, works more towards a fantasy style and Yudha is more into new school/modern style. Dewo’s works are mostly done freehand and he keeps on developing his own style.Twice a month, he works in Bali as a tattoo artist.

Gepenk is a solo tattoo artist. He started tattooing in 1995 and become more serious in 2000. He renovated his personal studio in 2008. Gepenk is a great freehand artist with all-round themes and style. Visiting his studio, located in the middle of the Yogyakarta kampong alleyways, shows his persona as a very humble man. Gepenk takes his profession as calling. He does tattoos for a living and he believes that his works are best visible on people’s skin instead of in a portfolio showing off his works. He is focused on a maximum result in every single tattoo he works on. 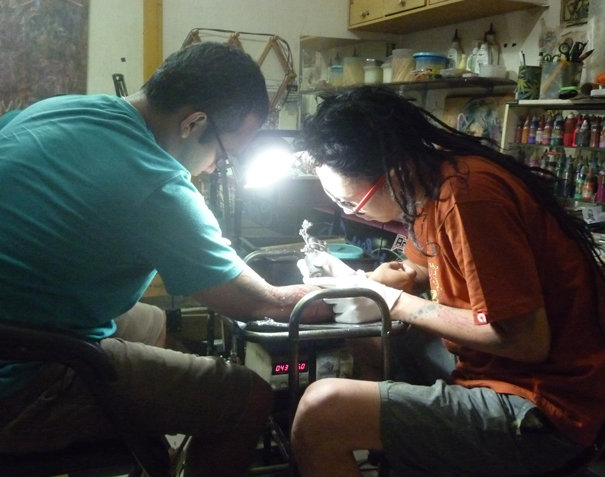 Address: Jl. Selokan Mataram, just around the corner at the eastern part of Gejayan street

The owner of the home tattoo studio, Kampret started tattooing professionally in 2004. PONDOK KELIR has a more communal atmosphere and, besides a tattoo studio, also houses a screen-printing, painting, airbrush and tall bike community. Kampret who is an autodidact artist believes tattoos express the spirit of life and form a part of a memory or a mark, creating an eternal art form. Working on someone’s skin for him is something special because the artwork will last forever. His personal style focuses on portraits, emphasizing the memorial value. He also works on abstract and bio-mechanic themes with color explorations. Most of his works are done freehand. The other tattoo artist Damar has a graffiti and street art background.