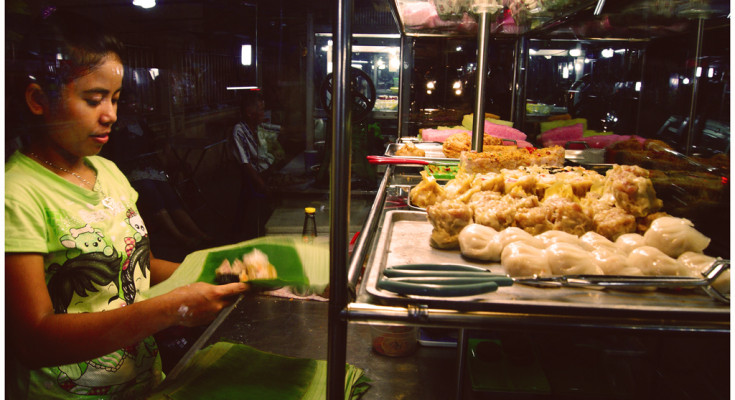 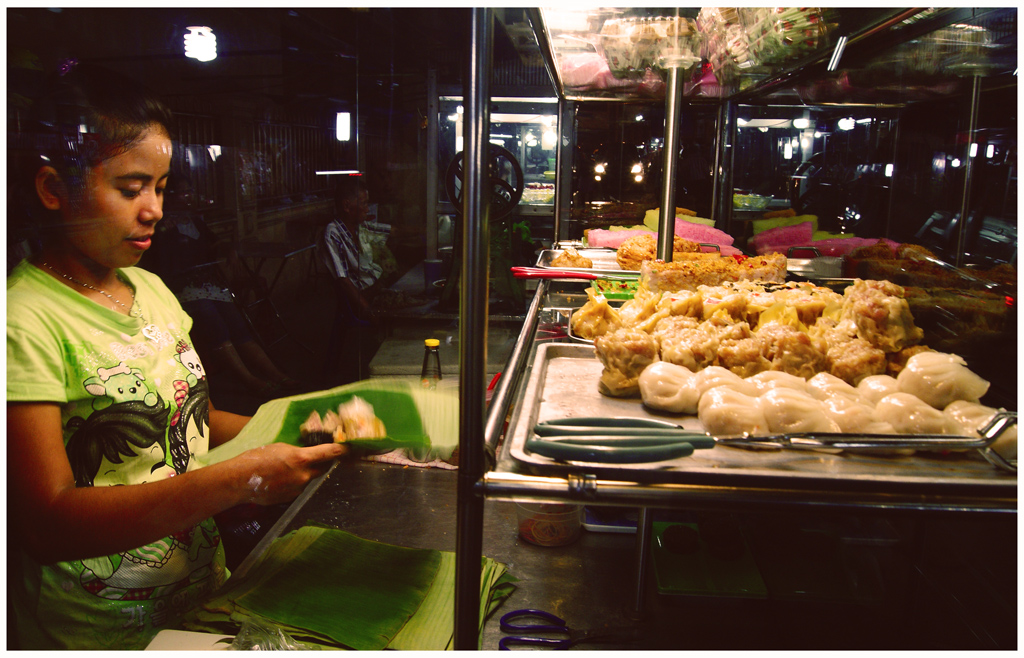 Medan, 9:45 p.m. The city’s commonly unruly traffic has died down. But this is not the case in a narrow street tucked behind Jalan Semarang, about a kilometer south of Merdeka Square.

At a bend inside the alley, a street light illuminated the wooden windows of aged, two-storey houses. It was a romantic welcome for my friend and me, both first-timers to Jalan Selat Panjang. Under the orange gleam, hot steams billowed out from a food cart displaying pork buns.

Jalan Selat Panjang is famous for its food, along this street you will find some of the oldest Chinese eateries in Medan. Feast on mie pangsit tiong-sim (noodles served with stuffed dumplings), kwetiau goreng (wok-fried Chinese rice-fetucinne), pokpiah (Singapore-style vegetable-stuffed dumpling).

Passing the bend, the true face of Selat Panjang presented itself. More food carts lined both sides of the street, complete with stoves and cooking utensils. Customers were packing the restaurants’ modest yet brightly-lit dining areas inside the houses. Clanks of spatulas against woks conflated with the sound of knives against chopping boards. 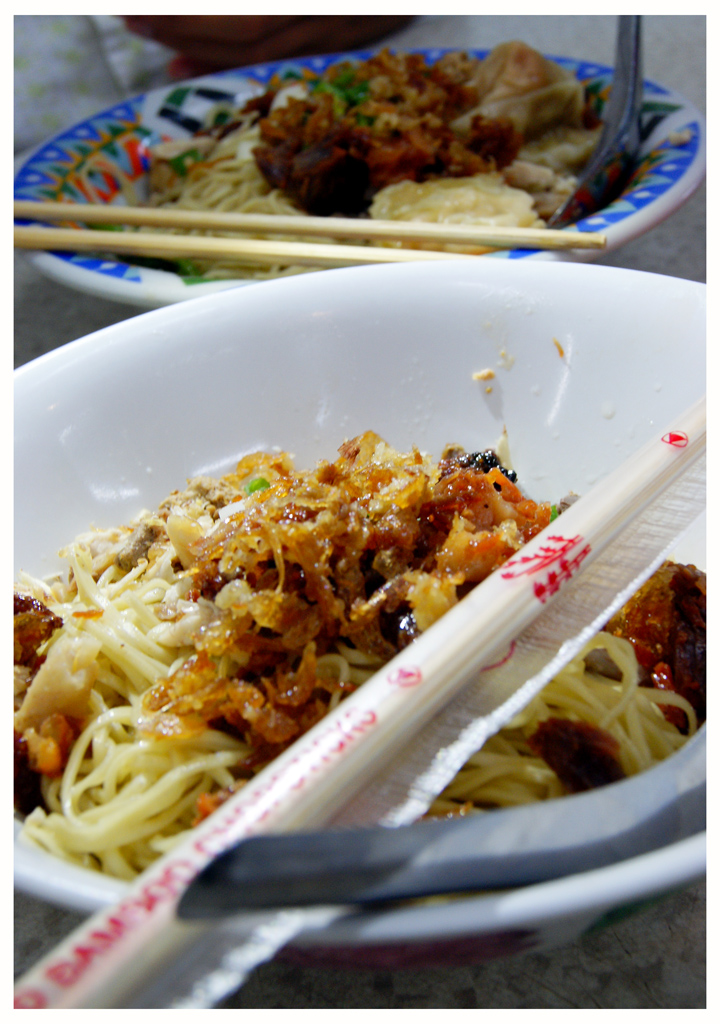 Strings of tiny lamps were hanging overhead. A middle-aged woman smiled and offered us to try her special recipe. Fingers jut out from a car’s window, waving  Rp50,000 notes. Soon enough, the money and some bags of food exchanged hands. Between the motored vehicles and the hot pans, other pedestrians walked by not as slowly or carefully as we did.

The vibe was overwhelming, but we were excited nonetheless. We had entered a wonderland of Chinese cuisine. To add to the surreality of it all, a camera-wielding man who turned out to be American came up to my friend and said, “Man, I have to show this to my mom!”

Not all the restaurants here have names. Some are known by the number on the house’s address. Having only heard of Selat Panjang from a Blackberry message, we randomly entered house number 12, which specialized in pork porridge.

Hospitality was the trick of the trade at No. 12. A young waitress sashayed from table to table with a big smile, taking or delivering orders. Mine, a bowl of porridge with pork dumplings and slices of grilled pork, came in no time (allow me to eat my hat for that last paragraph in my earlier article about pork se’i). Saving some space in his tummy, my friend asked for the grilled pork only. He did, however, sample a bit of my porridge. His wide-open eyes complemented his remark, “This is really good!”

The other end of the alley was crammed with snack carts. We ended up buying various colorful cakes, sweet crepes and boiled azuki beans. The putu bambu, or rice flour, palm sugar, pandan leaf and grated coconut steamed in bamboo pipes, was tempting too. But my friend opted for a heavier meal, so we stepped into a restaurant that actually had a name: Mie Tiong Sim.

This noodle shop has been around since the 1940s. The fact that it had no vacant table the first time we walked past it somewhat showed its reputation among Medan’s food aficionados. Later, having finally found a table and dug into our bowls of wonton noodles and meat cheng mie, my friend and I found ourselves searching for the right compliment the foods deserved. We settled with “insanely delicious.” 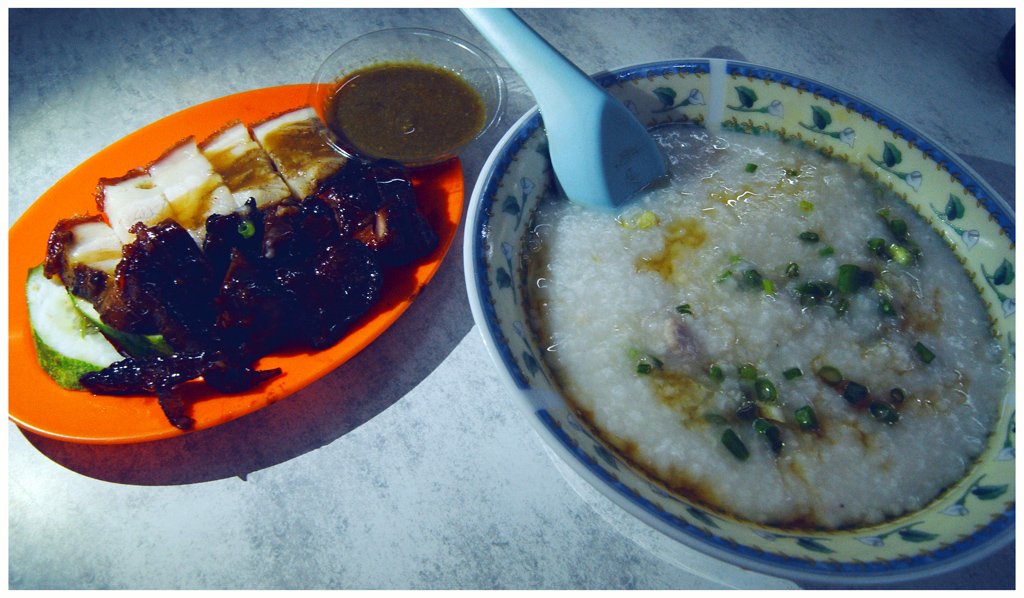 Unforgettable porridge and slices of grilled pork, By: Dalih Sembiring

Wanting to show off this latest find to our friends on Twitter, we posted several pictures of the foods and the alley. A friend who used to live in Medan responded, “Have mercy, you are torturing me! The best place for real Chinese food! I love Medan!”

The way I see it, Selat Panjang must have been one of those little mercies that make the jarring disorder that is Medan bearable.

You will find Jalan Selat Panjang in the Chinese part of Medan, don’t worry, everybody knows where it is.