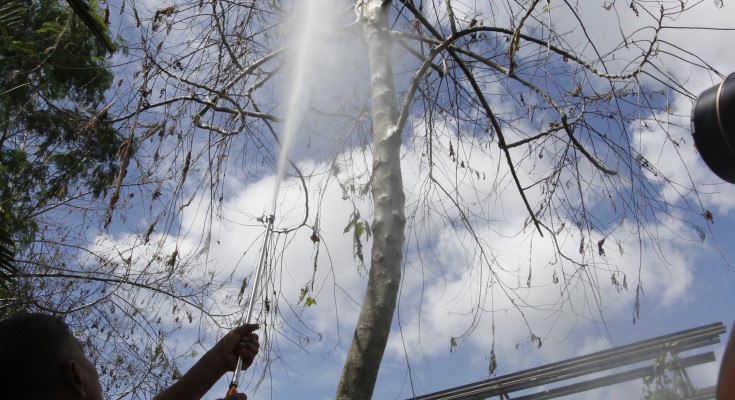 It’s almost like Indonesia is hit by 7 biblical plagues. After volcanic eruptions, earth quakes and tsunami’s, we now suffer a caterpillar outbreak. Not content with swarming in trees, thousands of caterpillars have found their way into people’s residences.

“These creatures are really annoying. I’ve seen tens of them crawling on the floor and wall right outside my room, some even got inside,” said Rina Arimiatun (25), a room tenant in Sleman, Yogyakarta.

Hosing caterpillars down a tree in Indonesia, By: Putri Fitria

The plague invaded East Java about two weeks ago and has been spreading across other islands in the last few days. Initially found in East Java, the hairy crawlies have gone to reach Central Java and West Java. Consequently, big cities like Jakarta, Yogyakarta, and Semarang are no longer immune. As of recently, Payakumbuh Sub-district and Medan on Sumatra Island and Buleleng, Tabanan and Denpasar in Bali have also reported similar occurrences.

A lecturer from Pest and Plant Disease Department, Faculty of Agriculture, Gadjah Mada University, Mr. Suputa, explained that there were different species of caterpillars in each place, including Lymantria Marginata, Arctornis, Trabala Sp and Maenas Sp that usually roosted on laurel, mango, and cananga trees.

Mr. Suputa also made it clear that unlike other kinds of larva, these caterpillars metamorphosed into moths instead of butterflies. Normally, they would take seven weeks to complete the cycle from the immature to a reproductive stage. Caterpillars leave their cocoons on a certain plant to live off from it. They may move to another plant and into homes. “Caterpillar plagues are not new in Indonesia, but this year’s has been the worst,” he added.

Caterpillars of these species have the ability to camouflage. They can adjust their color to their surroundings, for example, a tree trunk or a leaf. This often leaves people unaware that there are caterpillars there in numbers that may reach thousands.”

Hairy Crawlies on a tree, By: Putri Fitria

Vice-minister of Agriculture Bayu Krisnamukti paid a visit to the Faculty of Agriculture, Gadjah Mada University on Thursday (4/14/2011) to coordinate efforts to stop the caterpillar pest. According to Bayu, the greatly increasing number of caterpillars was caused by the drastic climate change that has taken place since 2010. The amount of food for caterpillars is growing plentiful as their predators are dwindling. “While more birds got killed, molds and bacteria that can control caterpillar propagation have been extirpated by pesticide,” he said.

Meanwhile, House of Representatives speaker Marzuki Alie had a somewhat uncanny view on the phenomenon. As reported by Metrotvnews.com, Marzuki maintained that the caterpillar outbreak in Jakarta was a warning from God. “This should make us introspect and evaluate ourselves. (We must ask ourselves) what should be improved as there is always a meaning behind an event. Therefore we should refrain from disputing, from fighting,” he said in the House of Representatives building in Jakarta, Wednesday (4/13).

Wise words, but if the caterpillars are moved enough to leave Indonesia remains to be seen.