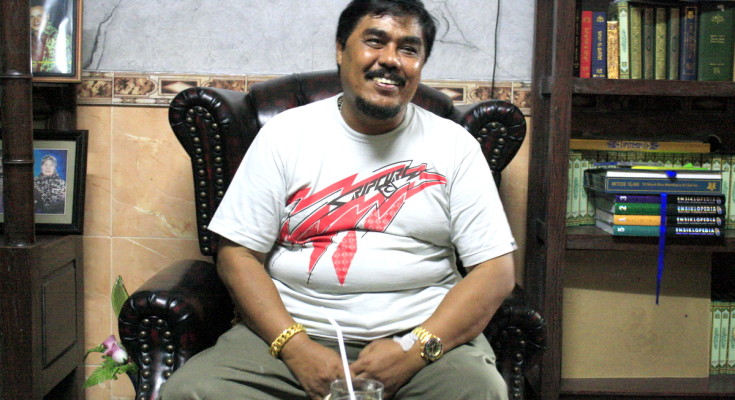 Inside the Islam Defender Front, Interview with an FPI Chief 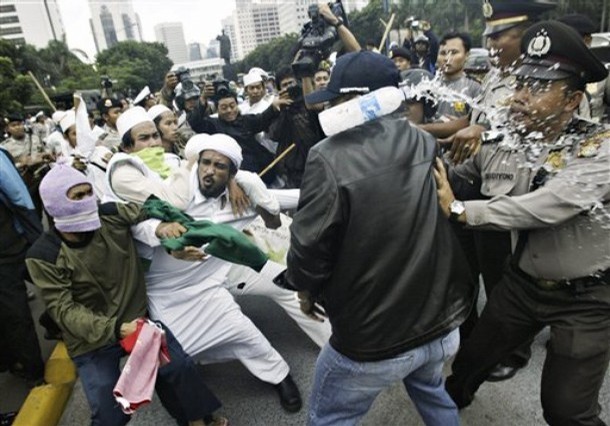 FPI demonstrators scuffle with police in Jakarta in 2007, By: Tatan Syulflana

The Islam-Defenders Front (FPI) is an Islamic mass organization that has been allotted a quite large portion of media coverage in the last few years. Records largely reporting their actions of nahi munkar (forbidding what is sinful) which often turns out breaking the state laws as they don’t hesitate to use clear-cut violence.

There are cases of FPI aggression towards people with deviant sexual orientations whereby the police  not only didn’t do anything to stop them, but even sided with them. And FPI was also involved in the attacks on churches and allegedly deviant sects such as during the Ahmadiyya attacks earlier this year, that cost the lives of 3 people. Meanwhile, raids on places believed to be sinful such as gambling dens and brothels, keep going on as if nothing is wrong.

You can read more on the attacks in Cikeusik, an incident that left three members of the Ahmadiyya group dead, when in a coordinated attack, thousands of people stormed the village in Banten province and collectively captured and beat  three Ahmadiyya members to death.

Interview with an FPI Chief: ‘We Carry out the Work of the Police’

Bambang Teddy (57), the FPI chief in DIY-Central Java region, when interviewed in his residence on Tuesday (4/5) night, did not deny any of FPI’s actions as reported in the media. He admitted that violence did take place, especially in Jakarta and West Java. In his opinion, in the war against sinful acts, it is proper that FPI carries out the duty that should have been carried out by the police.

For Yogyakarta and Central Java, Teddy applies a distinguished method to execute the mission of FPI. Since he first took over the position in 2005, the FPI of DIY-Central Java has been cooperative with the police. They coordinate with the police periodically to list disguised houses of prostitution and unlicensed liquor-sellers. “We provide information then let the police take care of the rest. Even if we take action ourselves, we will only destroy the facilities, not the people. We don’t attack people,” explained Teddy.

The Other (more Civilized) Face of the FPI

Teddy, however, deplores the partiality of the mass media he deems unfair by reporting only one face of the FPI and not seeing their other, “more civilized” side. The FPI is actually also involved in humanitarian activities to provide poor people with education and health programs. They also took an active part in helping the victims of 2010 Mentawai and Merapi disasters, so he stresses.

“In our humanitarian actions, we don’t look at one’s religious background. When helping Merapi victims, we even worked together with some priests,” added Teddy.

In some aspects, the FPI can be quite open. Once in two weeks, they hold a meeting to create a dialog with leaders of other religions. Teddy states that the FPI do not reject diversity, or differences between people and cultures, and have never been anti-plurality.

Teddy also clarifies that the DIY-Central Java FPI has never caused any damage or sealing of places of worship of other religions. “I often ask my men how they would feel if a mosque were damaged. Of course they would be angry and probably turn violent. I won’t hesitate to fire members that act like thugs.”

The Bottom Line: Ahmadiyya Must be Dismissed

But for the Ahmadiyya case, the FPI have set a clear bottom line: Ahmadiyya must be dismissed. While in other places in Indonesia there has been a fatwa proclaiming “Ahmadis’ blood as halal (rightful)”, such ruling does not prevail in Yogyakarta and Central Java. Teddy strongly prioritizes the peaceful ways to bring the Ahmadis to the “right path”. “I never say their blood is halal. They are human, (they) have families. We try to diminish the Ahmadis not by violence. And I can tell you that many of them are back on the right path of Islam,” he explained.

Nevertheless, they remain firm on its demand for Sri Sultan’s clear attitude by issuing a decree to disband Ahmadiyya in Yogyakrata. According to Teddy, as a special region, the Sultan ought to be able to make a decision independently without awaiting the central government’s command. If the Sultan does not respond soon, the DIY-Central Java FPI will work in line with the central FPI under Habib Rizieq.

“I’m worried myself if a war against Ahmadiyah must break out in Yogya, (because) the consequences may be very grave. I don’t want Yogya to be unsafe,” said the man whose childhood dream was becoming a police officer.

Observing the FPI’s activities in Yogyakarta, we can’t deny that there is actually some civility within the FPI. If only they translated their mission of amar ma’ruf nahi munkar (preserving the rightful, eradicating the sinful) in a humanitarian way, and if only they were more patient instead of hastily taking over the duty of the police, and placing themselves above the law, their existence as a civil society organization would be much more appreciable.