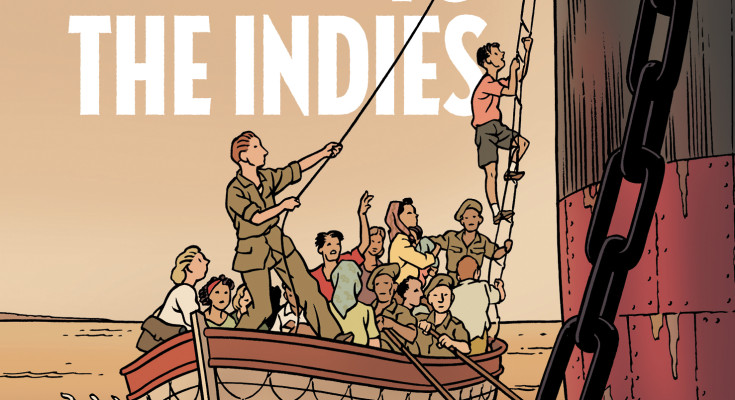 Farewell to the Indies by Hans Vervoort

Farewell to the Indies is the English translation of Hans Vervoort’s book “Weg uit Indië” (2012). He is a fairly wellknown Dutch author born in the Dutch East Indies (Magelang, 1939) and one of the few still living writers who grew up in the colony. Farewell to the Indies is the story of two children during the Japanese occupation of the Dutch East Indies in World War 2 and the ‘bersiap’ period that followed. The English translation is now free available on his website.

Summary: Hans and Sonya are living in the lovely sunny Dutch East Indies when war breaks out. Holland has been occupied by the Germans , their parents tell them, but the Indies will certainly remain free. Of course, the Japanese army does want to conquer the Indies, but everyone knows that the Japanese have crooked eyes so they can’t shoot straight. And their tanks are made of tin! What a shock when the Japanese army does conquer the Indies in 1942. Hans and Sonya end up with their mother in a camp where people are hit and each day they must fight against hunger and illness. When Japan is beaten three years later, they are freed and hear how difficult life has been for families outside the camps. And then a new adventure begins right away. The Dutch have ruled the Indies for three hundred years but now the locals don’t want that anymore. They revolt, people die and danger lurks everywhere. Everyone flees and Hans and Sonya must say farewell to the Indies too. A dangerous journey begins. Will they make it?

A note from the author on the English translation:

Many people who grew up in the Dutch East Indies emigrated immediately after the war during the Bersiap period, or when Dutch sovereignty was transferred to the Indonesian government in 1949. They left for the USA, Australia, New Zealand or elsewhere. Many of these emigrants and expats now have children or grandchildren who do not read Dutch. My book Weg uit Indië (Farewell to the Indies) might be useful in helping them tell their (grand-) children what happened in the Dutch East Indies during the Japanese invasion and the turbulent years after the war. This is why I asked Michele Hutchison (professional translator)  to translate it in English and used part of my savings to pay for this project.

Hans Vervoort has put the English translation on his website as a free download in 4 formats: PDF, Kindle, Epub and Word. Just try his website www.hansvervoort.nl and click on “Indische hoek” (Indo-European corner). Or directly: http://www.hansvervoort.nl/index.php?page=_&floatingpageId=8