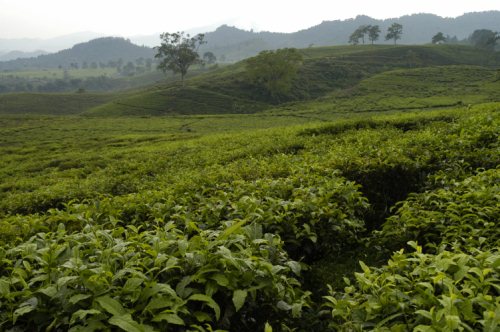 The Story of Tea in Indonesia 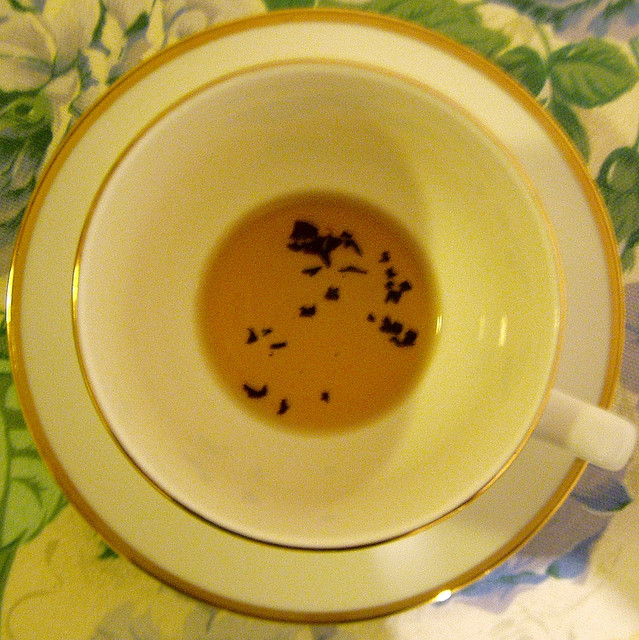 Tea has been a part of Indonesians daily diet for 200 years, By: Cyron Ray Macey

Tea has been a traditional beverage for Indonesians for over 200 years, particularly among village women. Men tend to prefer black and dark coffee; enjoying its taste mingling with the aromatic blend of a kretek cigarette, before starting their daily routines early in the morning. The serving process runs smoothly almost like a traditional rite; early in the morning and in the evening alike.

An old woman in Solo in her early 80s told me once;  “When I was a child, my mother always served tea. We had to drink tea before starting our activities in the morning.”

Her past and joyful vivid memory seemed to have lived on in her life, as witnessed by her automatic and ritualistic current practice of serving tea: “Until now I always drink tea, as well as my children with their own family members. It is healthy as well,” the lady told me and then recalled her husband as the best man anyone could wish for, preventing her to ever get married again. Her husband passed away when she was not even forty yet.  “My marriage was great and there is and will not be no one like “him” in my life,” she proudly told me.

Actually I wasn’t aware of how our random conversation brought us into intimate family affairs. Later on I realized, the lady was possibly triggered by the advertisement that was running on television at the time. On the screen the tea was served; ending up the family conflict; it supposedly improved their communication as well as avoid any miss-communication. 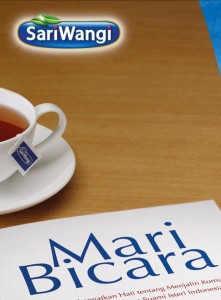 The company behind the ads is Unilever, a trans-national Dutch-based company. By introducing ‘Tea has been a part of Indonesians daily diet for 200 years, By: Cyron Ray Macey’ (Sariwangi Let’s Talk), Unilever seems to put tea time back into family life.

The Winding Story of Tea in Indonesia

Tea derives its name from cha, in the Amoy or Hokkien dialect and was pronounced as t’e but was later on pronounced as “tey” by 17th century English. It was discovered by Shennong, the legendary father of Chinese medicine. Shennong first tasted it, traditionally in ca. 2737 BC, from tea leaves on burning tea twigs, after they were carried up from the fire by the hot air, landing in his cauldron of boiling water. As a scholar, father of agriculture and inventor, he instructed his people to drink tea with boiling water as a hygienic precaution. Codification of various methods of tea cultivation and preparation were made by a “Tea Saint,” Lu Yu. After centuries using it in  limited elites, tea was widely consumed from the 7th century.

Speaking to the press, Karel van der Hucht said that tea was introduced in Indonesia in 1648. Karel, according to Kompas, a Jakarta based newspaper, is the fifth generation of GLJ van der Hucht, the founder of Parakansalak Tea Plantation, Sukabumi, West Java. Along with some other families such as Holle, Bosscha, Kerkhoven, Van den Berg and Deninghoff Sterling, they pioneered the breakthrough of the tea cultivation in the country. 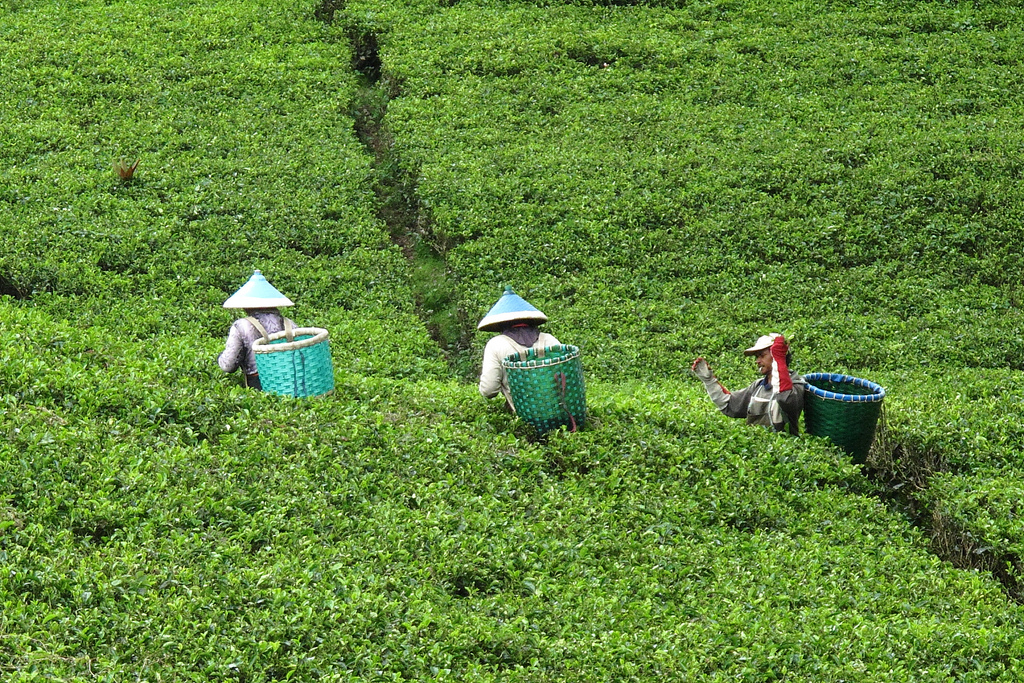 Workers in a tea plantation near Bandung, By: Chen Wu

Initially, tea was used as the decorating plant in the Tijgersgracht compound of Batavia. Nearly a century later, in 1824 to be precise, this bushy tree was planted in Land’s Plantentuin Buitenzorg (now Bogor Botanical Garden) and exposed to the public. The seed was imported from China, possibly coinciding with the arrival of the first Chinese laborers in Indonesia for the newly developed mines.

The Indonesian public got to know the plant when it was planted around Bogor in 1826 and the following year in Garut – Limbangan. The tea plantation was extended to Cisurupan, Garut and Wanayasa, Purwakarta two years later.

When the Dutch introduced the Cultuurstelsel in 1830, the government had the local people plant tea on their hired land and bought it from them on harvesting. The booming commodity then encouraged the government to run its own plantation for almost thirty years. During the time, local Javanese started drinking tea, made from second class leaves, as their morning rite.

Under Governor General LAJW Baron Sloet van de Beele, the tea plantation and trade policy changed; instead of government officials, the private companies ran it. In 1878, the Dutch imported sour tea seeds from India and from Ceylon in 1886. The Agrarische Wet (Agricultural Law) in 1870 enabled private companies to run the plantation on a land rental basis lasting for 75 years (erfpacht) and drove tea into its golden years, until the Second World War. But Indonesian tea soon regained its power in the early 1950s to 1980s. 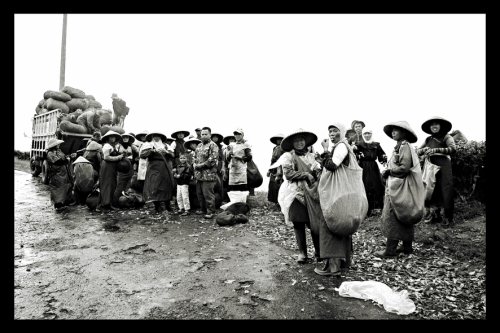 Not Indonesia’s Cup of Tea?

Global competition has since proved a new challenge for the Indonesian tea production. China, India, Kenya, Sri Lanka, and Turkey are now the main tea producers, Indonesia only placing 7th on the list. Many leading manufacturers are tied in a race offering a variety of different tea lines and qualities. The grading of tea is an accepted method of classifying the tea and it relates to the quality of the tea leaves. The grading of black tea facilitates the international trade in tea and is the central component in the assessing of a money value for the various types of tea. Labor costs are, as in every industry, often of paramount importance as well. The Indonesian tea production has been steadily declining.

Indonesian consumers often settle for second class traditional tea packed in simple paper, served in hot water. When it comes to that not a lot has changed since colonial times. The first quality tea is sold overseas, to major conglomerates such as Twinings, while Indonesians are left with the leftovers. Most Indonesians are not able to appreciate good tea and are certainly not willing to pay the heftier price tag. The younger generation prefers slimming tea, health tea and herbal tea. The last three products lines exhibit world class quality and packaging worth sale beyond the borders.

Indonesia currently stands as the 7th tea exporter worldwide but the problem is how long nature provides us tea in our cups when many tea plantations rapidly change into concrete plantations; highways, malls and settlements? Besides that, is Indonesia able to withstand the cut throat competition in the global tea trade, without underpaying its workers? The tea plantation in beauty matches any sawah (rice paddy) featured on travel brochures as the signature vista. There seems to be no doubt about the quality of Indonesian tea. A study by a tea research center in China found that, thanks to its tropical climate, Indonesian tea has more antioxidants than varieties grown in Japan and China. Yet, the branding and international export of Indonesian tea seem to not deliver since its heydays in the colonial era. Has the winding road of tea in Indonesia hit a road block?

Read more about Indonesian tea on this blog: Indonesian Tea, a collection of articles about tea in Indonesia.