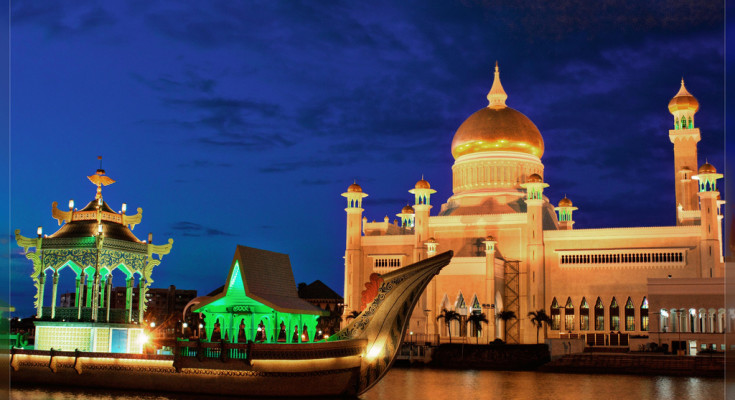 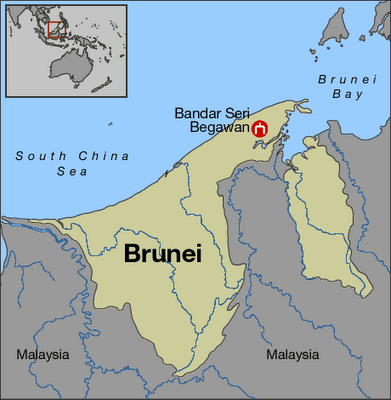 After traveling around Malaysia for several weeks, entering the capital city of Bandar Seri Begawan (commonly shortened to Bandar) in the tiny country of Brunei Darussalam was a noticeable difference. First off, getting to this place wasn’t entirely easy. One can fly there without much difficulty, but the flights are usually quite expensive, especially on Royal Brunei Airlines. My fiancée and I opted to take a fast ferry from Kota Kinabalu in the Sabah state of Malaysia. The boat rocked terribly and made us both sick, but we briefly stopped on the duty free island of Labuan to change boats giving us some respite.

Getting to Bandar Seri Begawan, Brunei

Arriving in Brunei is nothing spectacular. The ferry terminal is relatively small, and there wasn’t even a place open to exchange money. A bus ride into the city center took about twenty minutes. The condition of the roads while approaching Bandar was very good in comparison to Malaysian Borneo and there was a definite air of wealth and organization that is not as discernible in Malaysia. The city center of Bandar is quite small, since the city only has about 30,000 inhabitants. Although, even for this number of people, it didn’t seem very large.

What to do in Bandar Seri Begawan

There actually isn’t much to do in Bandar besides looking at various buildings which were erected by the last few sultans. These buildings consist of mosques and palaces. The most striking aspect of the city was despite the country’s wealth, there didn’t seem to be much more development than in most Malaysian cities. To put this into perspective, Brunei has a GDP per capita of $51,300 which puts it at 9th in the world and ahead of the United States. Malaysia’s GDP per capita is $15,200 which puts it 75th in the world. 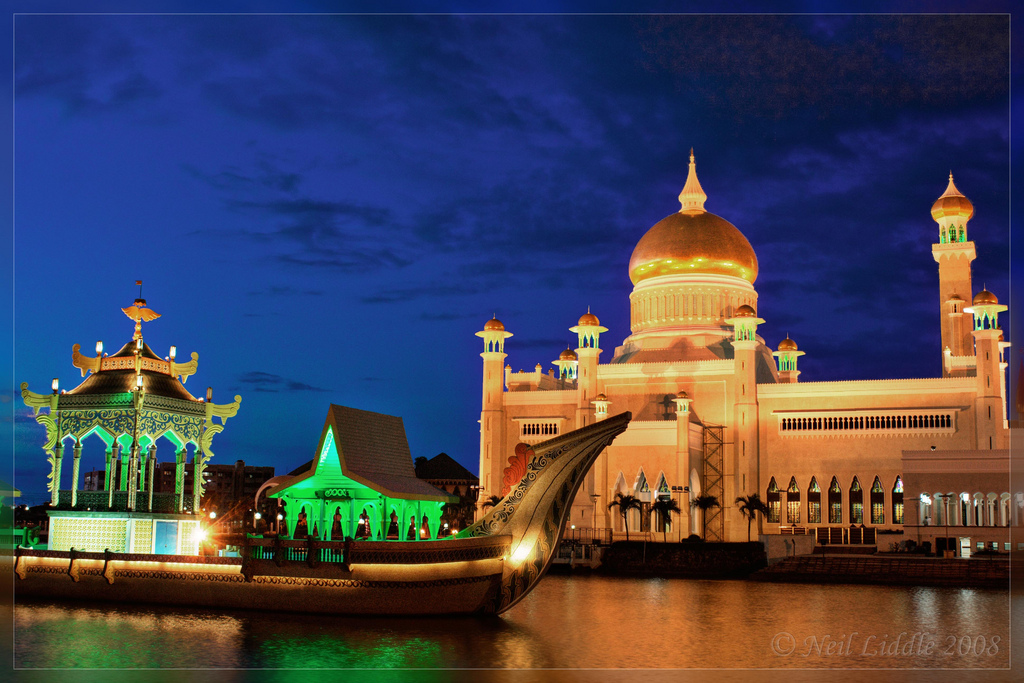 The royal Islamic mosque with a ceremonial ship, By: Neil Liddle

There may be many reasons for the city not looking too flashy, but I’m pointing this out as something I was surprised to find. I would have expected the city to basically look like a miniature Singapore. I suspect this observable disparity has something to do with the fact that the Sultan and his family hold billions upon billions of the country’s money in their hands. However, the government does supply free medical care and education through university and subsidizes housing and rice.

Most of the residents themselves didn’t seem particularly rich. As a matter of fact, there are whole neighborhoods in the city located along waterways in what looks like a traditional style. This in itself doesn’t indicate poverty or lack of wealth, but the condition of the housing was nothing elaborate. I can’t say for certain if this means that people didn’t have much money, but in most places people with money will put a fair bit of it into their houses. In comparison to another small but rich country, Singapore, there didn’t seem to be the level of wealth that I would have expected.

The city sits on the Sungai Brunei (a river) which runs into the ocean, and waterways are still important transportation routes used to travel around the city and to outer-lying neighborhoods. The boats themselves were small privately run speedboats which were often enclosed but nothing elaborate.  It’s surprising how much the waterways are still used for transportation. Brunei is technically a disconnected country by land. The Temburong district of the country is actually detached from the main landmass, since it’s interrupted by the Malaysian state of Sarawak. However, this district of virgin rainforest, which I highly recommend visiting, is connected to Bandar via water because the well sheltered Brunei Bay lies between the two land masses. 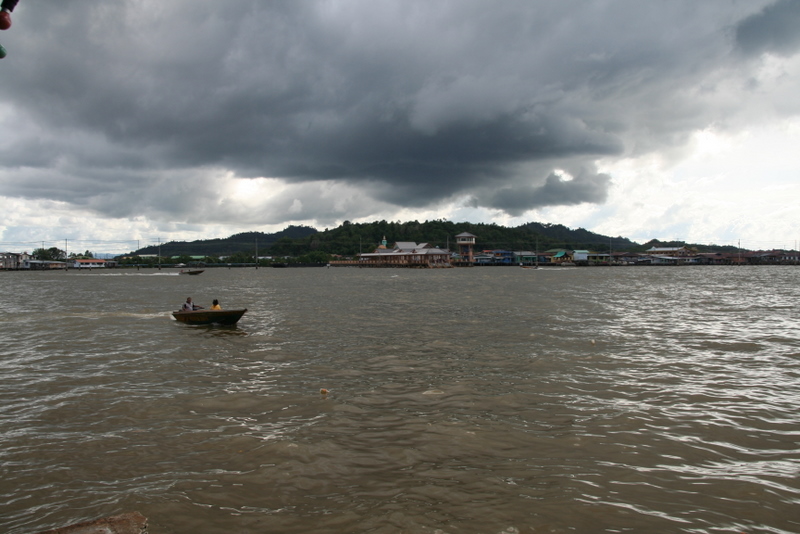 The absence of much activity in the city probably has a lot to do with the retail life. Since Brunei is such a small country, a person can easily drive or take a ferry to Malaysia. In Malaysia, consumer goods are at least one third the price as in Brunei. It seemed that the residents travel frequently between the two countries, since on board the boats people often carried large amounts of everyday goods from Malaysia. It could also be that residents of the city go to Malaysia to periodically escape the strict rules existing in Brunei.

Bandar Seri Begawan: Stringent but with Some Diversity

Brunei is a strict authoritarian country, much like Singapore, but more so in many ways since it even prohibits the sale of alcohol. Despite this and possibly due to the lack of alcohol, Bandar still felt like a small laidback tropical city. The stringent regulations over people’s lives come from the fact that Brunei is a Muslim sultanate. Despite this, there are some Chinese who live there as well. As a matter of fact, we missed the ferry out of Brunei and had to stay another day. A Chinese taxi cab driver let us stay at his inn, and there was even a Chinese temple close by. 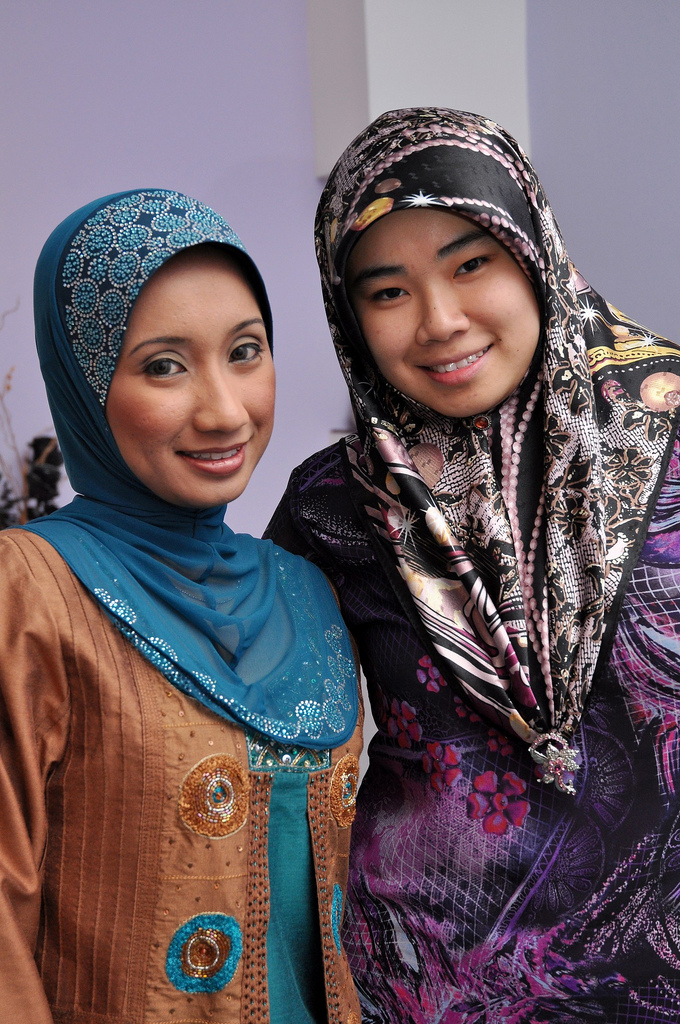 Getting out of Bandar Seri Begawan

We departed from Bandar by boat. However, we opted to only travel a short distance via water to a small Malaysian village in Sarawak. From here, we took a bus back to Kota Kinabalu. All in all a better option than taking a ferry the whole way. On the bus, we even got to watch the forgettable movie Poseidon (2006) which is about escaping a capsized cruise ship. I have to wonder if that was not a tactic to discourage people from taking the ferry.

Although interesting for academic reasons, Bandar is probably worth skipping as a destination, but Brunei is still worth visiting for its well preserved rainforests. Translated, the country is known as Brunei, the Abode of Peace. And in fact, the tiny nation lives up to its name as a calm and controlled refuge for most people and many species of wildlife.

Various facts and statistics in this posting came from the CIA World Factbook.