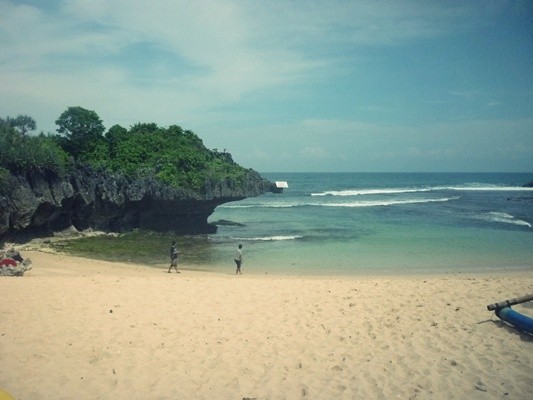 8 a.m. and we started our trip to explore some beaches in Gunung Kidul, the most mountainous part of Yogyakarta. It took us over two hours by car to get there from Yogyakarta City, not only to take pleasure in its natural beauty, but also to talk business and to learn how people there take care of their beaches. 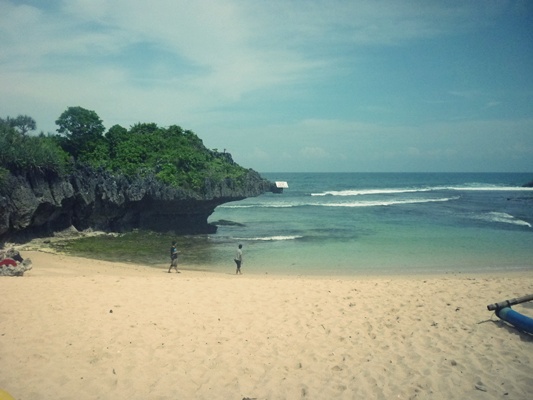 The picturesque beach of Ngandong, By: Dorothea Gecella Putri Lestari

Our mouths could not stop gaping until a child surprised us with a splash on the surface of the turquoise water. Later, the heat of the sun that had totally burnt our faces could not stop us from creating footprints across the warm, white sand. Strips of giant rocks on the western end of this beach seemed to want to make us believe that we were the subjects of a famous painting.

Big-scale businesses on Indrayanti, Sundak, and Ngandong beaches began sprouting when capital started flowing from outside the area. Investors from Yogyakarta have developed lodging, dining, and amusement facilities which in turn have been handled by locals. It is a mutually advantageous relationship. The investors get a run for their money while the local people can work at these facilities, or even develop their own businesses as the area is now becoming more crowded, especially on weekends.

To manage the beaches, locals have formed a community for each beach. Indrayanti has Komunitas Usaha Masyarakat Kawasan Indrayanti (Business Communities of the People of Indrayanti/KOMPAK). KOMPAK controls the safety on the beach and the number of people who work there. This community has some regular activities such as cleaning the beach together every Friday morning and conducting regular meetings. Members of KOMPAK chip in money each week to pay those who clean the beach on a daily basis. They even have a special green card for those working in Indrayanti.

“Indrayanti is not the real name of this beach. It’s actually Pulang Sawal. People called it Indrayanti because the first restaurant on this beach was named Indrayanti,” said Edo, a KOMPAK member we met outside a motel by the shore. 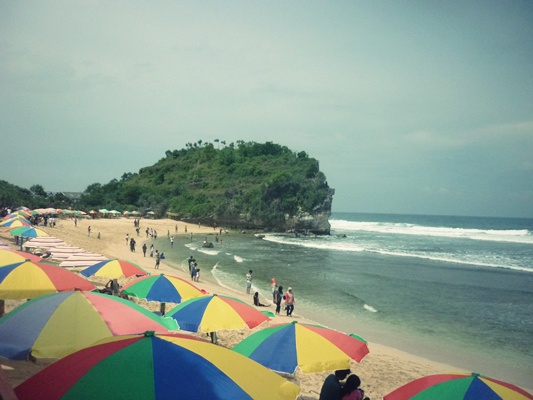 Motel Indrayanti is the only motel with the most complete facilities around here. One can rent the whole motel by paying Rp. 3 million per night. It has three rooms complete with beds, cupboards, bathrooms, TV in each room and free breakfast. Each room can accommodate five to seven people. The private kitchen can be used anytime. It also has a meeting room, a barbeque spot and, the most important thing, the best view of Indrayanti Beach. Nevertheless, visitors can also rent one room by paying Rp. 750,000 per night.

Locals have also grasped the opportunity to rent out umbrellas on this beach. They only work on Saturdays, Sundays, and holidays. For Rp. 20,000, you can get an umbrella and a plaited mat for sitting idly on the beach. When not renting out umbrellas, the same people sell fish.

For those who work as parking attendants, the area has six parking areas, but they have to let the local government run five of them. The area that the people manage is larger, and the parking fare is more expensive. It costs Rp. 5,000 to park a car here, Rp. 2,000 for a motorbike and Rp. 15,000 for one bus. Buses cannot be parked in the government-managed area due to size. Each parking attendant in the privately managed area gets around Rp. 75,000 a day on a busy day.

If Indrayanti has KOMPAK, Sundak has SADARWIS, which stands for Sadar Wisata (Tourism Awareness). Unlike the first, SADARWIS allows just about anyone to sell their merchandise on Sundak. The community has a bi-weekly beach cleaning program. Those who clean this beach get paid by the government once every three months. 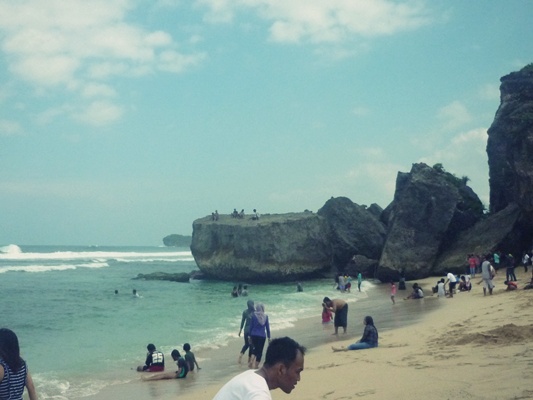 Sundak, which has the longest sand strip compared with the other beaches, is only 10 minutes away by car from Indrayanti. However, Sundak is not as crowded. There are not that many differences between Sundak and Indrayanti. People around this place also work renting out umbrellas, selling food, and managing the parking area. Food stall owners earn around Rp. 2 million a day on a busy day. On regular days, they only make about Rp. 500,000 per day. The most crowded time on the Islamic holiday of Idul Fitri, when a food stall owner can make up to Rp. 5 million.

Our last destination is Ngandong beach. On foot, it is only five minutes away from Sundak to the west. Ngandong is a good spot for snorkeling and watching cute little fish swim between seaweeds. On this beach visitors can meet locals who work as seaweed collectors. We were also quite surprised when we realized that this was the only beach that had any foreigners on it. 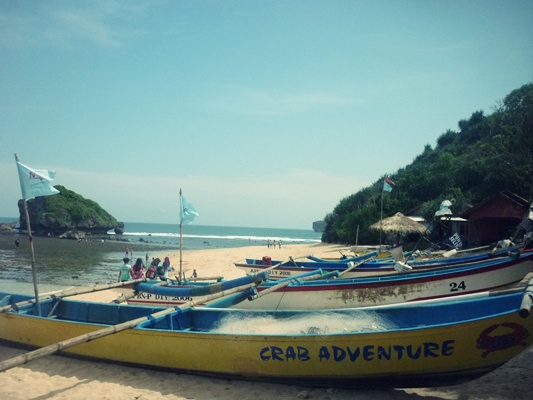 “I choose this beach because it is the most beautiful beach and not too crowded like Indrayanti,” a woman said after we approached her. She also said that Ngandong was the best place to put up a tent for camping because, unlike Indrayanti and Sundak, the distance between the sea and the road left a wide enough area for it, and it is safe.

Indrayanti, Sundak, and Ngandong each have their own distinct charm. Not just because of their natural qualities, but also because of the good relationship between the investors and the local people who take care of the beaches. What use is natural beauty if it slowly gets ruined by human hands? The people on these southern beaches seem to know this well, and try their best to keep a good balance between running business and preserving nature.

Latitudes is not responsible for incorrect or incomplete information in this article.