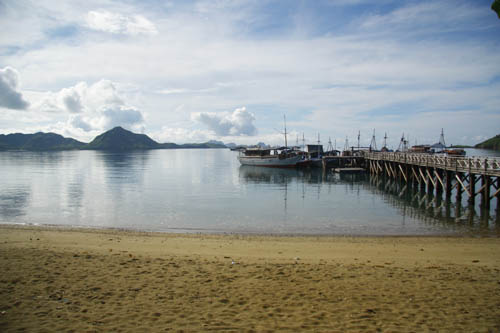 The marvellous Komodo National Park is arguably one of the most interesting places to visit in Indonesia. Located on the edge of the Lesser Sunda islands, it consists of a number of phenomenal islands, surrounded by clearblue coral seas, abundant with marine life. But above all, the park is home to a truly remarkable creature, the Komodo dragon, worlds largest lizard. Spending a few days in the heart of dragon’s territory will prove to be unforgettable.

Komodo National Park comprises more than 1700 square kilometers and was established in 1980 in order to conserve the Komodo dragon. Currently there are still around 5000 of them, divided into smaller populations on Komodo, Rinca and two other islands in the park, and a small coastal strip on Flores. The national park was declared a World Heritage Site by UNESCO in 1986 and over the years it has been dedicated to protect the habitat of other land and marine species too.

Although meeting the Komodo dragon might be your main reason to go all the way here, the park boasts a few other spectacular attractions. The formidable seas around the volcanic islands are widely regarded as one of the top diving sites in the world. Expect to see amazing coral, thousands of fish species, various types of sharks, turtles, dolphins and manta rays. During the right season, also whales can be spotted in the waters. 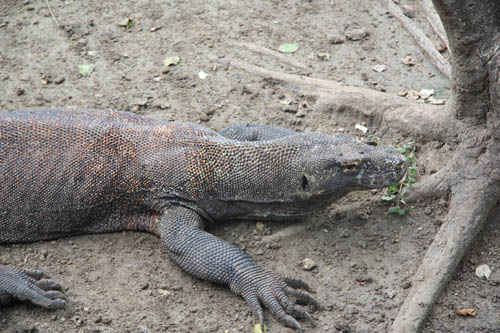 The park is easily accesible and can best be visited from Luabanbajo, a pleasant port-town in Western Flores. There is a small airport with flights connecting to Bali four times a week, and a harbour which has daily ferries to and from Sumbawa. On the snugly tourist strip of Luabanbajo, just behind the harbour, around a dozen tour operators offer trips into the park. It are mostly two or three day trips, including snorkling and a guided tour over the two main islands of the park, Komodo and Rinca, to spot the dragons.

Prices vary widely -the more people go on a trip, the cheaper it gets- but also seem to depend on who you know (some hotels seem to have the best contacts) and how hard you can bargain. Diving trips can be booked seperately at a few diving schools in Luababajo. Almost all have decent equipment and are reasonably priced. 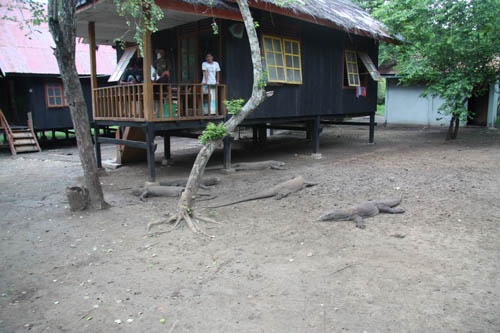 Dragons Scavenging around the kitchen. By: Ed Caffin

For many however, seeing a Komodo dragon up close is the highlight of a trip to the park. And rightly so: an encounter with the dragon, known as ora to the Komodo islanders, is quite something. For one, it is an intimidating animal. An adult version can grow up to 2,5 meters, usually weighing around 70 kilograms. It’s mouth is full with bacteria and 60 serrated teeth.

Although it seems to be lounging lazely for most of the day, it is a truly ferocious predator. It will wait for a weak or injured prey to come near, it’s mouth dripping with infectious saliva. When it has the chance it bites it’s victim, usually only once, infecting it with bacteria. Then it patiently stalks it’s victim up to several days untill it finally dies and will slowly devour its carcas. 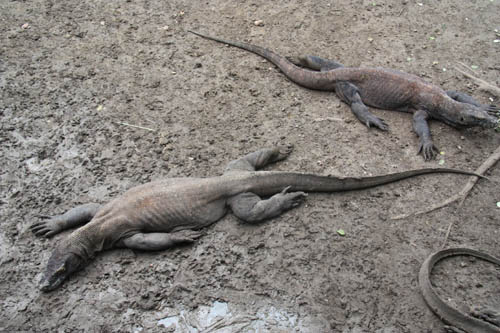 Dragons Lounging in the shade. By: Ed Caffin

If you are still up for it, it is quite easy to spot dragons on Komodo or Rinca, even in the wild. Every day, various types of guided tours (short, long, easy or difficult) can be booked at the park offices. All tours offers sublime views over the island and seeing a dragon is guaranteed – although some guides want to make you believe it is your lucky day! if you spot one.

If not in the wild, you’ll at least see a few dragons scavenging or lying around the park’s office kitchen. Although they seem half asleep most of the time, they can attack suddenly and run really fast. So avoid being a hero, and don’t draw to close. Remember you are in it’s territory. If your are truly lucky and one starts chasing you, climb a tree to save yourself. Choose a comfortable one though. Ora might hang around for a while…