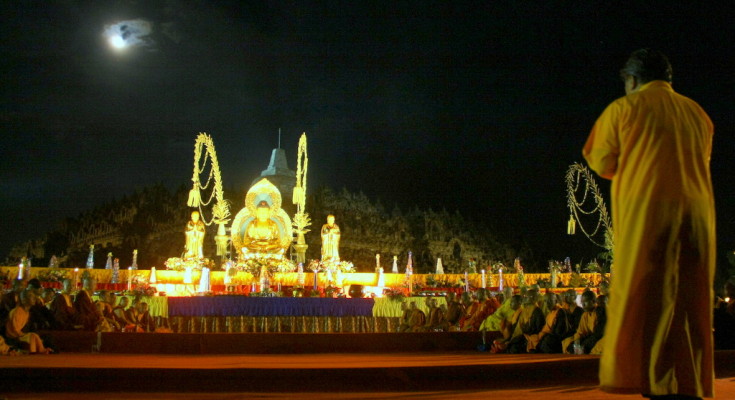 Vesak, or Waisak is a big day in Buddhism. At the Borobudur Temple, in central Java the Vesak celebrations attract thousands of visitors, most but not all of them Buddhist monks. Often called ‘Buddha’s birthday,’ Vesak actually celebrates the birth, enlightenment (Nirvana), and passing (Parinirvana) of Gautama Buddha. At Waisak night thousands of Buddhists from all over Indonesia gather at the temple’s yard to hold the ceremony of Vesak Day 2556. Aside from the Buddhists, representatives from other religious beliefs also attend this festive occasion. 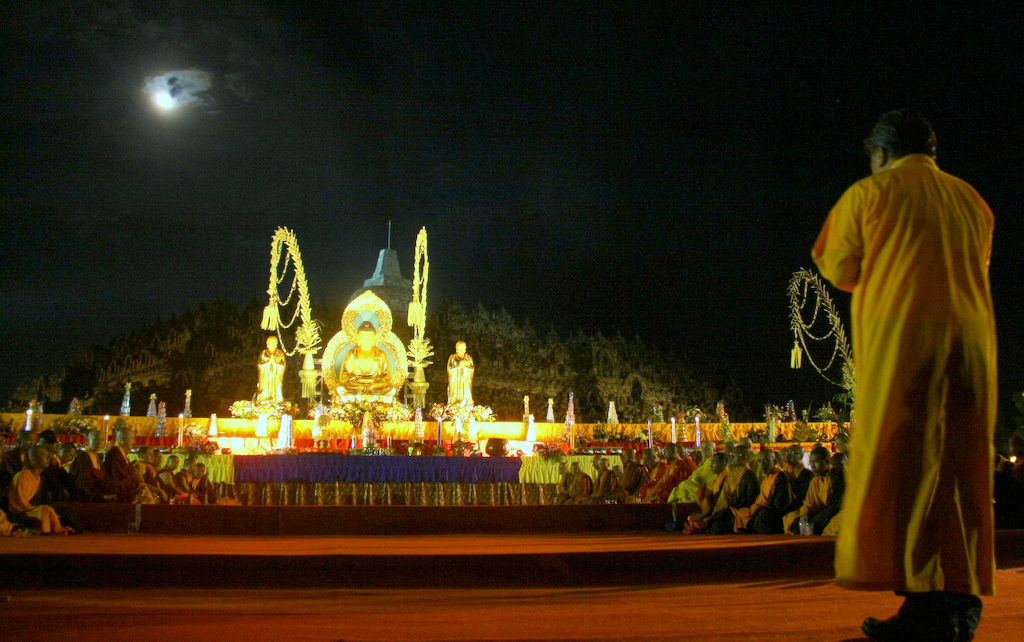 Vesak or Waisak is often referred to as Buddha's Birthday, By: Putri Fitria

Last year the Vesak ceremony was led by Thai monk Bante Wongsin Labhiko Mahatera. The Buddhists meditated for 10 minutes in anjali position, which is sitting cross-legged with folded arms before the chest. Solemnly, they reflect on the journey of Siddharta Gautama, their guru and model in life. The monks come from Indonesia, Thailand, as well as other countries such as Tibet, Laos, Myanmar, Singapore, and Cambodia. 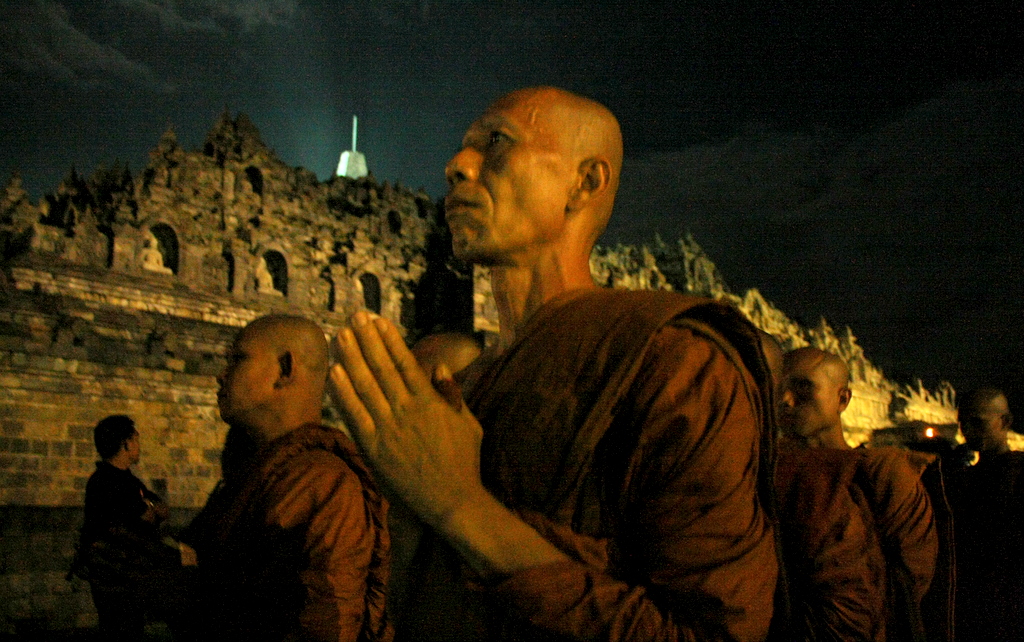 Monk Tadisa Paramita Mahastavira, in the Vesak contemplation, called on all Buddhists to ask themselves whether in practicing Buddhism they merely celebrated Vesak annualy or they had really done good things for other living beings on a daily basis. 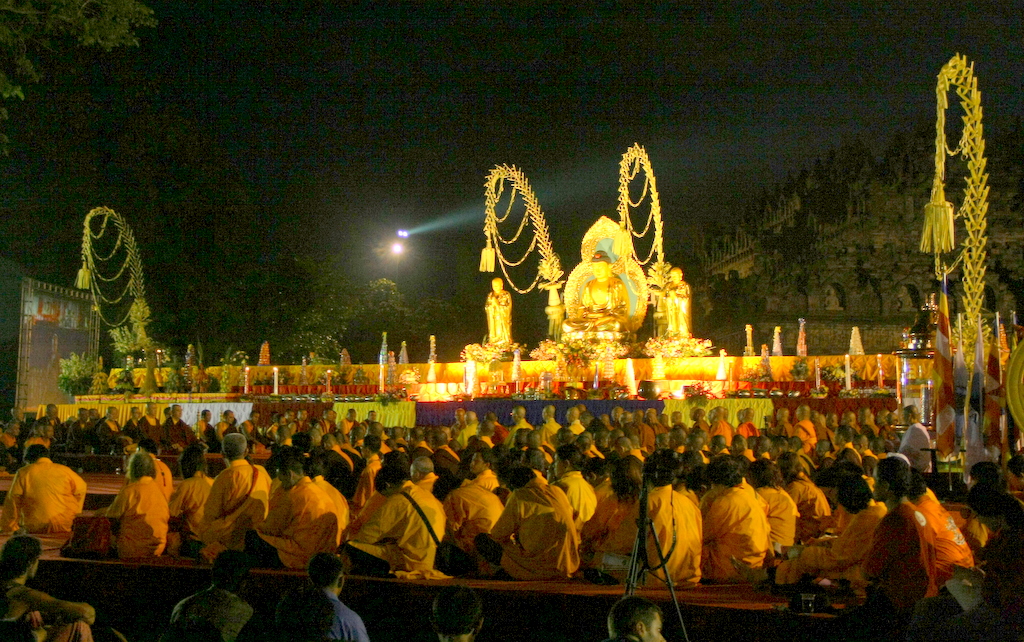 “Vesak is not a mere ritual. [Performing it, we have to ask] what have Buddhists done for their neighborhood, their nation, and their country? We shall take up the noble objective of Siddharta Gautama that is to free human beings [from worldly sufferings],” said Tadisa.

Throughout his life, the Buddha never hurt others. He brought peace and taught people how to seek the true happiness in their heart. He kept himself away from desire, greed, hate, jealousy, and foolishness, that he found peace amidst all theworldy sparkles and rush.

Vesak reminds us of three important events in the life of the Buddha. One, his birth as Prince Siddharta Gautama in 623 BCE. Two, the day when he, being a hermit, received perfect enlightenment and began his life as the Buddha in 588 BCE. Before that, he was a prince and soon-to-be Cakkavati (king of kings). Siddharta left his palace after seeing old people, sick people, and dead people. He then consciously sacrificed his life for humanity.

The third important event is the death (parinibana) of the Buddha in 543 BCE. By then he had found the eternal truth (Dhamma) that can release humans from anguish. The Buddha had travelled to teach this Dhamma for the happiness of God and human beings.

These days, there are different interpretations of human values among people, that often cause social problems. In this Vesak Day, the monks urged everyone to live according to the teachings of each own religious belief and spread peace everywhere. This was in line with the message of Vesak 2555 BE/2011 CE, i.e. “Finding Happiness and Peace within Ourselves.” 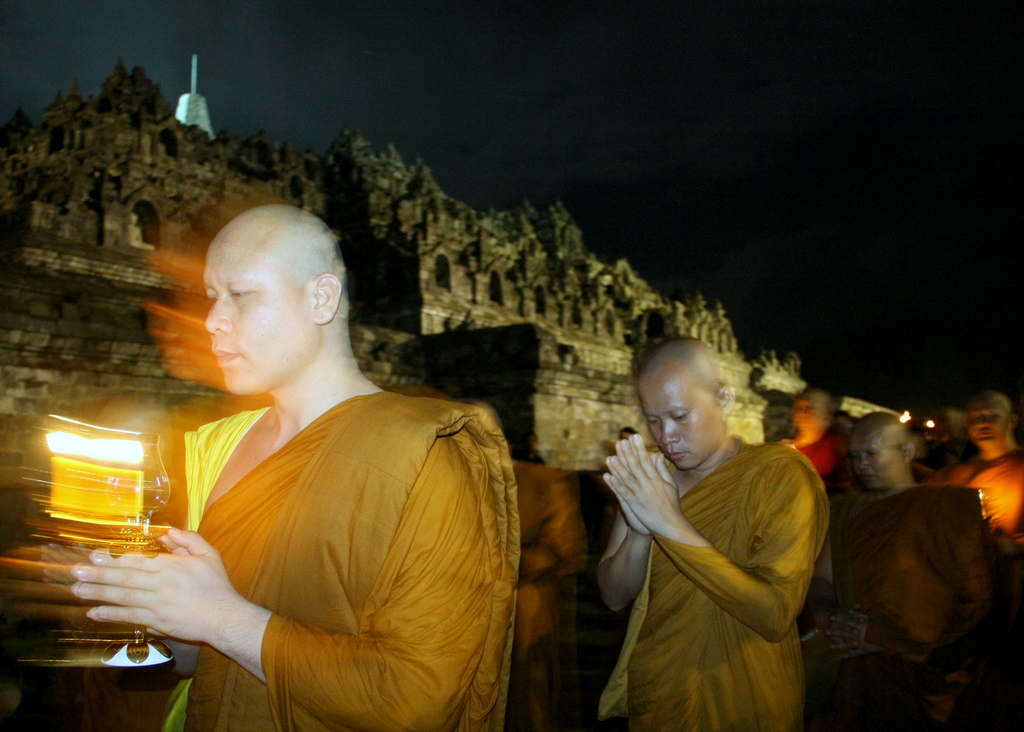 Devotion in motion, By: Putri Fitria

The Vesak celebration actually started earlier this week, when 10,000 bottles of holy water were taken from the Jumprit spring in Tegalrejo subdistrict, in Central Java. The water symbolizes human humility and plays an important role in the celebrations. 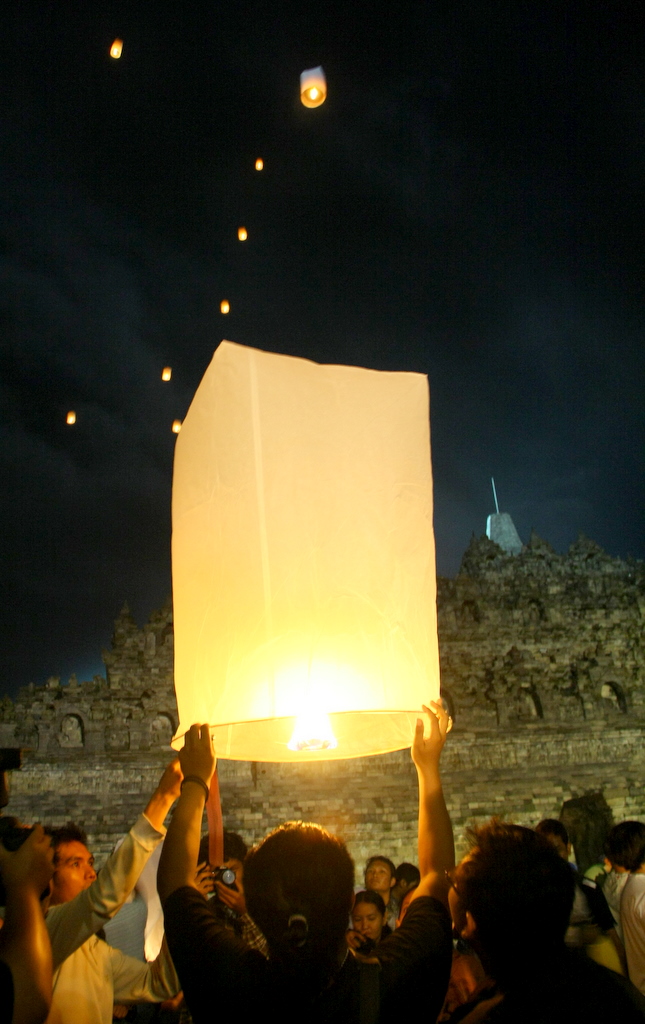 Releasing lanterns after a succesful Vesak, By: Putri Fitria

Saturday, another ritual was held that entailed taking the flame from the source of the eternal flame of Mrapen in Purwodadi, Central Java. The flame symbolizes light that would bring enlightenment to human beings. During the Pindapata ritual on Thursday, Buddhist monks receive charity from the people.

The highlight of the commemoration will take place on Sunday at the Mendut and Borobudur temples. The precise moment of Waisak is due to fall on Sunday at 34 minutes and 39 seconds past 10 a.m. and will be observed at Mendut Temple. On Sunday afternoon, both the holy water and the flame will be brought to Borobudur Temple for the Waisak celebration, at 7:30 p.m. in the evening. Waisak will be concluded by releasing hundreds of lanters in the air, a wonderful gesture  meant to represent the Buddha’s bringing enlightenment to the world and the hope of dreams realized in the year to come.

Visitors are wlecome to observe the Waisak celebrations, obviously respecting the monks and rituals taking place.