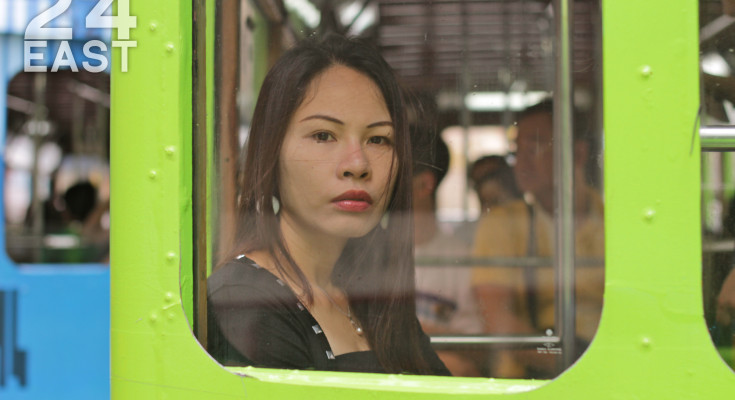 ‘The woman who knew’ is a story written by Carlo Convertini. The story is set in Hong Kong and starts with a woman who’s enjoying an ordinary Sunday morning in Hong Kong. She tells the story of her and her friends, who made a trip to Hong Kong where they meet an extraordinary stranger in the public transport…

I read somewhere that the morning in Hong Kong must be seen from one of the famous double-decker trams still operating on the island. They move east to west since 1904 and it’s hard to believe the city would look the same without them hence I forced my friends to wake up at 6 in order to be there on time. I was looking for the city awakening, emerging from the night before, I’m not sure but probably that was a Sunday morning.

‘For two endless minutes she’s been my partner in crime’

Since the hotel we were staying was on the mainland we had to cross the river to get there, skip breakfast and get on the very first train to the south. Once we reached the empty streets of the island my friends asked: “So what now?” I smiled while looking in the direction of the red tram approaching with all of that noise and said: “We’re getting on the tram and ride until it stops, I want to see where it ends”. So we did.

We reached the end of the route and once arrived, away from the touristic spots, we all agreed that that was the real Hong Kong. Little English was spoken but a few streets from the train a beautiful market was happening and, with some difficulties, we had freshly made egg-tart for breakfast.

We all enjoyed the ride so far, hence we decided to go all the way to the other end, and while one of my friends felt asleep as soon as the train started the journey, I quickly moved to sit on the back of the deck. It was beautiful: from that seat the perspective on the city was great and the slow-rigid-pace of the tram felt like you’re not just looking outside of the window, you’re actually filming with your own eyes.

Going back the empty roads little by little became more vibrant and shortly after we left I noticed that another tram was following us. It was a shiny green tram and I noticed a woman sitting in the front seat of the deck: she was my counterpart. I stared at her and waited, metaphorically speaking since I wasn’t indeed driving the tram. Surely she noticed me with the camera. I didn’t want to miss the chance to take a picture, well, a series of pictures while she got closer to me at the next stop.

She noticed I was there but she didn’t smile or move to another seat: she just posed for me. For two endless minutes she’s been my partner in crime. Two minutes during which two strangers found themselves playing opposite parts of a movie.