Only a few kilometers away from the busy seaport city of Balikpapan, Sungai Wain Protection Forest is home to Malayan sun bears (Helarctos Malayanus), the smallest bear species and one of the least studied.

The Bornean lowland dipterocarp forests are extremely rich in biodiversity. Sadly, these forests are rapidly being destroyed by deforestation, conversion to oil palm plantations, and forest fires. Landslides, erosion, local droughts and flooding, are increasing in frequency due to this over-exploitation and destruction. Despite its status as protected species, sun bears are constantly threatened by habitat loss and illegal animal trade.

Gabriela Frederiksson, who studied the sun bear since 1997, and her colleagues gave birth to KWPLH (Kawasan Wisata Lingkungan Hidup) in 2005.  They managed to build a sun bear enclosure to preserve the species and also to make the sun bear iconic for species protection in East Kalimantan. In 2006, five sun bears that were confiscated from their illegal owners, were transferred to their new home, 1.3 ha (3.25 acres) of land. 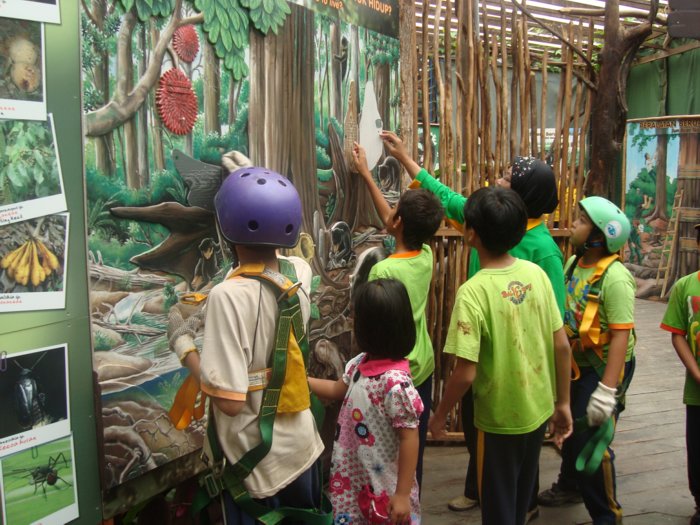 The sun bear enclosure is not only a new home for the bears, it is also raises awareness on how important it is to protect this kind of species and the forest as their natural habitat. The enclosure setting benefits both bears and visitors. The naturalistic enclosure allows the bears to engage in natural behavior. This is highly beneficial for the health and welfare of the bears. At the same time, visitors gain an understanding of bear behavior and habitat. By seeing animals in a natural environment people will be less pleased when they encounter rare and protected wildlife in small bar cages or kept on chains.

Sun Bears as a City Icon

Nowadays sun bears are well-known among the Balikpapan public as their city mascot. In the public space you encounter several paintings of sun bears around the city. KWPLH and local municipal authorities have made a great effort in protecting sun-bears and raising environmental awareness. So if you happen to go to East Kalimantan, schedule your free-time to enjoy the forest escapades and don’t forget to say hello to five playful and healthy sun bears in KWPLH sun-bear enclosure.