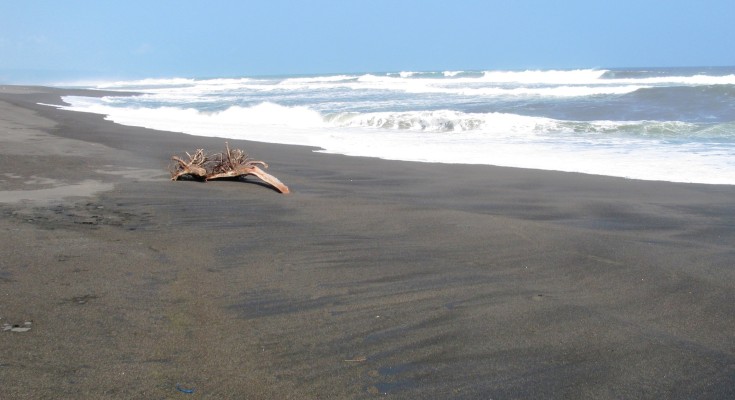 Amid a sunny day at Samas beach of Bantul, Yogyakarta, Rujito digs black sand in a planted concrete pot with his two palms slowly. It is the time supposed for sea turtle’s eggs to hatch after fifty-day-incubation under warm sand. He looks glad as his effort to generate offspring is successful. 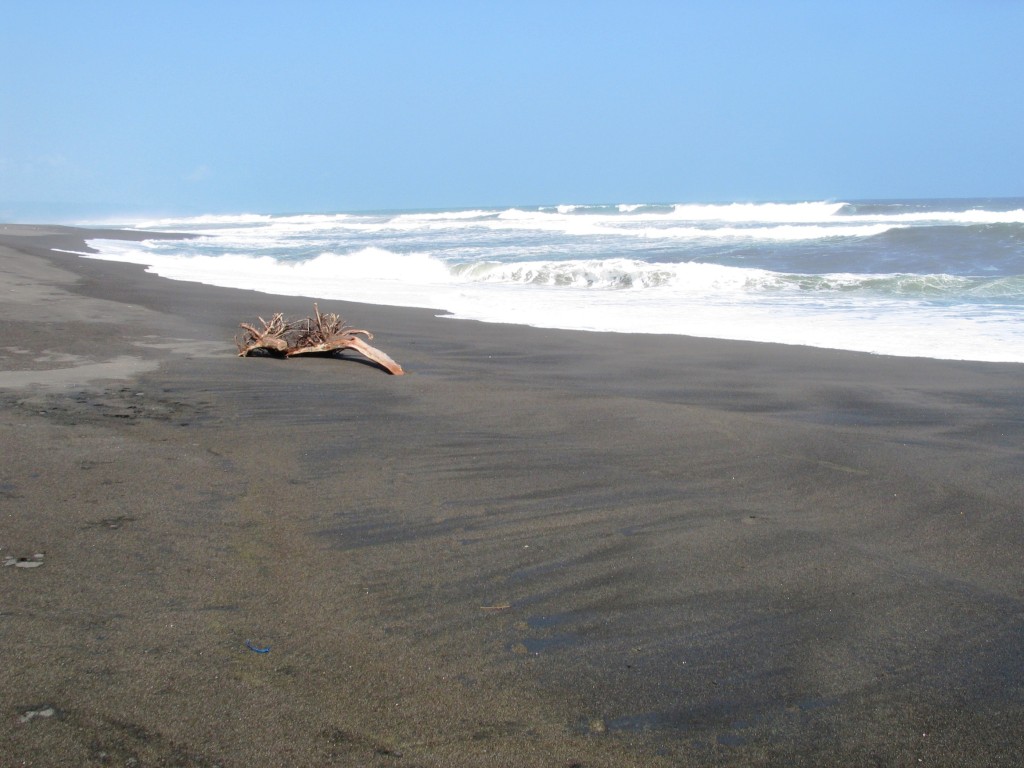 Among 104 eggs he moved from natural nest, 95 hatchlings come out alive in Rujito’s incubator pot and the rests are yet idle. He lifts all baby turtles out from cracked egg shells and moves them one by one carefully into a large pool filled with four-inches-deep sea water. 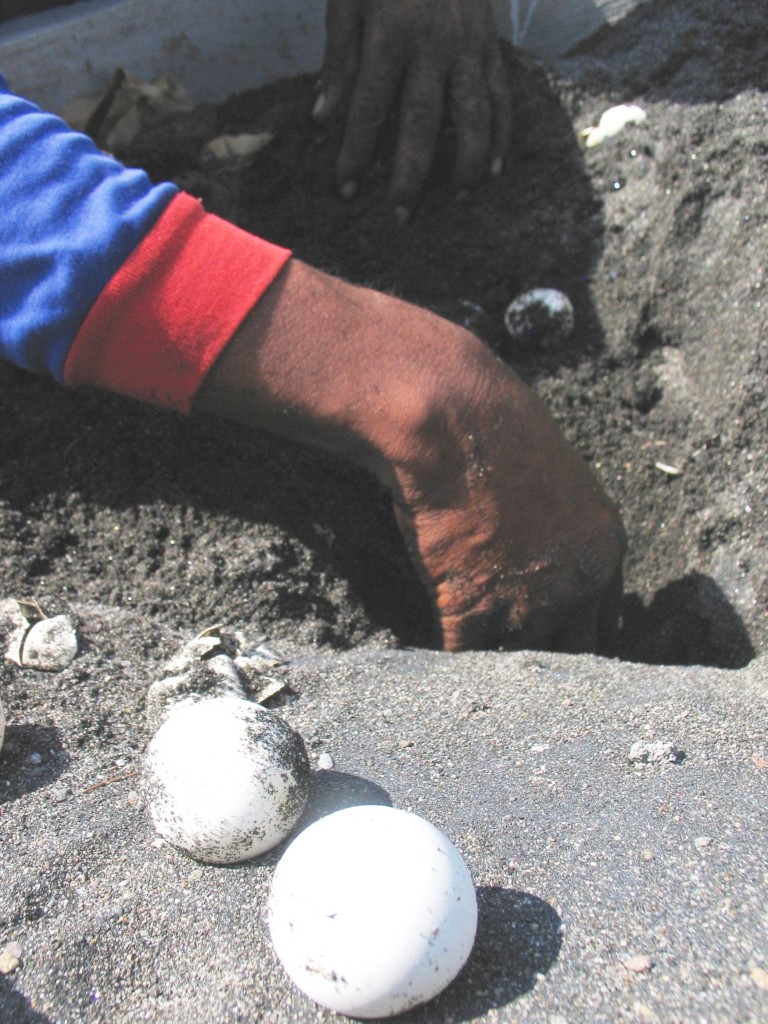 “They are too fragile and still floating on surface so we place them on shallow water. We feed them for a week to make them stronger to swim and catch prey, and then we release them back into the ocean,” he says.

Rujito, 53, is an ordinary fisher and sandy-land farmer in Srigading, Bantul’s village situated at the shoreline. However, only little time he spends for fishing and farming since his most daily work is dealing with the small conservation site. 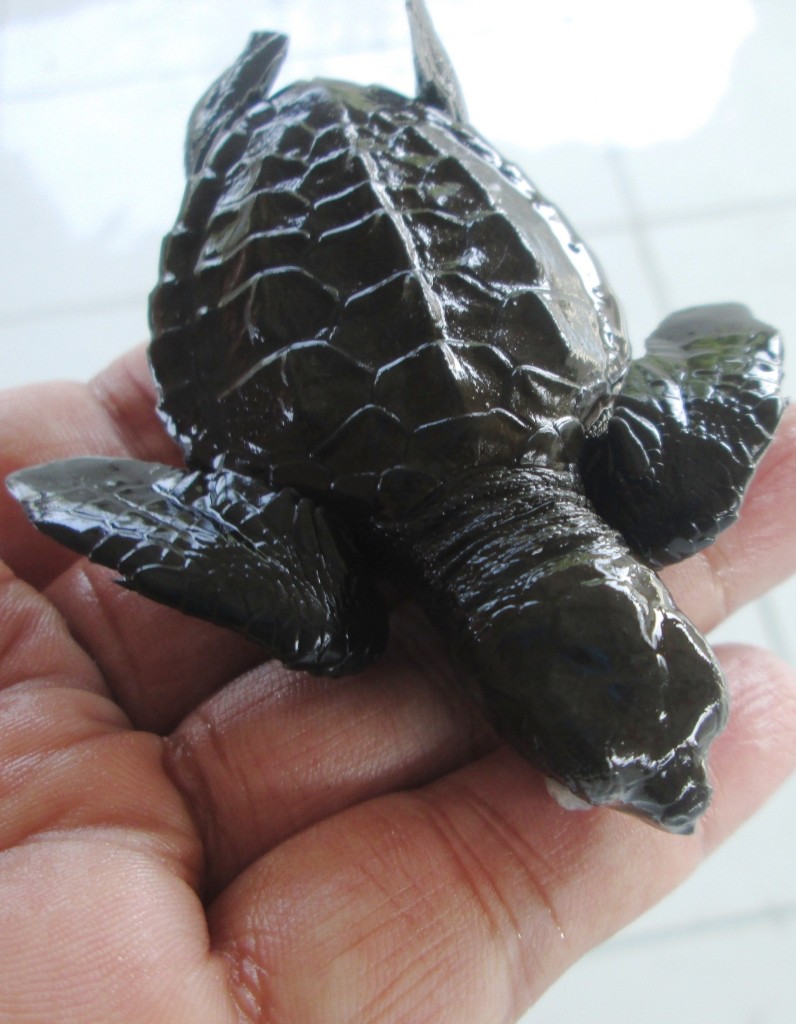 He seeks turtle’s eggs along the shore at night during nesting season, places them in man-made nesting pots in conservation site, cares and feeds hatchlings, and releases them into the sea.

Samas beach facing to Indian Ocean is a favourite place for four of world’s seven turtle species to lay their eggs. Leatherback turtle (Dermochelys coriacea) and Hawksbill turtle (Eretmochelys imbricata) usually emerge to nest here during January to April, while Green turtle (Chelonia mydas) and Oliver Ridley turtle (Lepidochelys olivacea) come up during May to August. 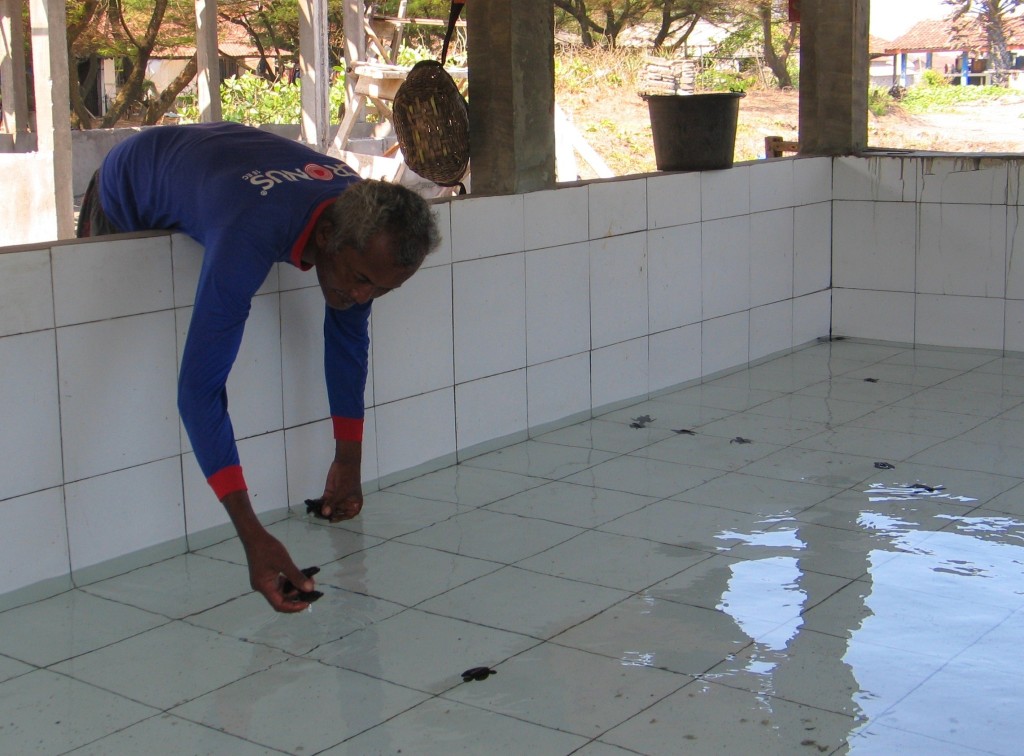 However, poaching in Samas was considerably uncontrolled before the last decade. Rujito was previously a turtle hunter along with other fishers living in the village. He hunted both turtles and eggs to trade off money.

The reptiles were butchered for food and the carapaces were sold as material for crafts in Yogyakarta and other cities. The egg was also sold to black market since it was believed for its efficacy to raise man’s stamina.

“Fishers (in Indonesia) are so poor that they will hunt for everything valuable around the sea. I hunted turtle, ate the meat, and sold the carapace and eggs,” he recalled.

Rujito realized that he made fault for the nature as he would contribute to turtle extinction in the following years. He was also aware that poaching and trading protected animal violates Indonesian law on biodiversity, and the criminals would be punished in prison and fined.

Government Regulation no. 7/1999 protects all turtle species from killing and trading, while International Union for Conservation of Nature (IUCN) includes them in vulnerable and threatened species lists.

Based on Convention on International Trade in Endangered Species of Wild Flora and Fauna (CITES), all species of turtle are also listed in appendix I. It means they are forbidden for trading across countries.

Rujito ceased hunting turtle and asked over the other fishers to stop killing and trading this aquatic reptile. From a hunter, he turned dramatically become a turtle guard in Samas. He intended to abolish his past misdeed by helping turtle to increase population.

“I confessed for my preceding mistake, but I hoped it was not too late to save turtles from extinction. I promised myself that I would spend all my life to conserve turtle in Samas,” he says.

In 2000, he initiated to form Bantul Turtle Conservation Forum (FKPB) involving local fishers under supervision of the Natural Resources Conservation Agency (BKSDA). The forum is responsible to prevent illegal hunting.

Fishers are no longer allowed to catch turtle or steal the eggs. If the reptile is accidentally trapped in boat’s fish net, the fisher must release it back to the sea.

Since the forum was established, turtle poaching has drastically decreased. Egg stealing still happens, but not in massive like ever before and allegedly done by outsider.

The forum’s basic work is to provide supporting environment for turtle to lay eggs and produce babies. By this way, the reptile can raise population without threats in land.

As Samas is open beach having many visitors, it will be very difficult to keep the natural nest uninterrupted. Along with human and animal predator, intensive abrasion caused by rampant tides at Samas also threatens turtle’s nest and reduces hatchling’s life probability.

To save the eggs, Rujito initially moved them from the natural nest to be buried in sand near his home, but most of them failed to hatch. He needed some tries until he finally designed incubator pot made from cylinder concrete planted in bare land and filled up with tightly pressed sand.

Besides protecting the eggs from intruder, concrete pot he made is also tested to make high rate in producing hatchlings. At least, 90 per cent eggs successfully hatch.

He also built pool as temporary sanctuary for baby turtles before they are released into the ocean. The pool is filled with supply of food and flowing sea water pumped directly from the shore to prepare the hatchlings for acclimatising in their natural habitat.

Unfortunately, the conservation site he built in the shore’s edge 14 years ago was fatally damaged by abrasion during raging coastal tide season in last year. He lost everything, but he refused to give up. He has set up a larger one in different location this year.

“We have no money to rebuild the new site so that we seek donation from people who are willing to help turtle conservation. A Dutch couple helps us by providing a new pool for hatchlings, while the others support for reconstruction,” he says.

He has released more than 30.000 baby turtles into the sea. He finally loves turtle as it is witty reptile. Turtle has excellent sea navigation as it commonly migrates for thousands miles across the ocean. The reptile will back to the beach it came from to nest without being lost.

Turtle is also smart enough to decoy predator by leaving fake nest. Based on Rujito experience, fake nest without eggs beneath is made neatly around five to ten meters from its true nest, while the eggs deposit commonly does not resemble the nest.

Rujito’s hunting savvy is now useful to rescue the reptile. In seeking eggs, he follows some clues frequently indicating turtle creeping up to the beach for nesting, such as sea bird flying and crowing above the shore overnight.

“The bird is predator eyeing the turtle laying eggs from the air. It makes loud voice to call the others to prey the eggs,” he says.

However, the current problem hindering turtle to lay eggs is sea pollution. A pile of plastic waste left by tourists at the beach and chemical-contaminated water also affect the sea creature’s life.

Some years ago, Rujito witnessed a nesting season without any turtle emerging to lay eggs at Samas beach after a tar-contained vessel spilled out its material on the sea.