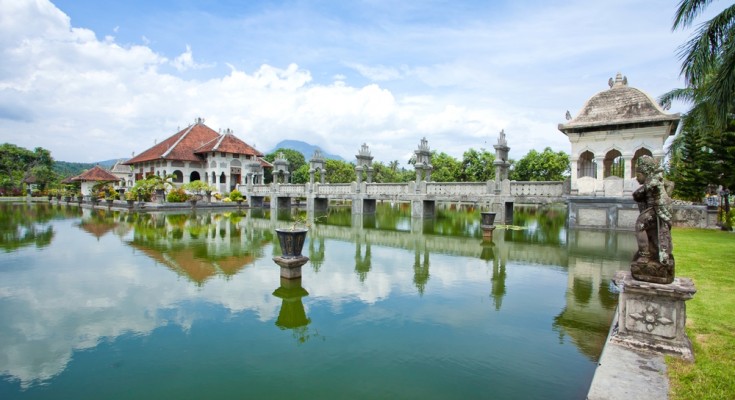 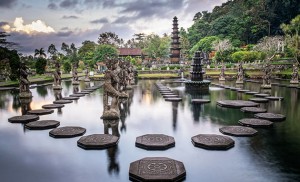 You may be surprised to learn that Bali has quite a large number of royal palaces (puri), a legacy of the island’s eight ancient kingdoms, which were ruled by rajahs. After Indonesia’s declaration of independence in 1945, these rajahs lost their powers and much of their vast lands to the new democratic republic. The high-caste descendants and heads of these royal families still reign but no longer have legal power and therefore do not rule. Some have opened their doors to the public so that visitors are able to get a brief glimpse behind the palace walls. Unlike the palaces of Europe, Balinese palaces are not huge standalone buildings, but rather a series of courtyards, gilded pavilions, gardens, rice sheds, ornately-carved stone statues, holy springs, family temples and old-style residences, linked by a peaceful maze of gateways and alleyways, and enclosed by high walls. Balinese palaces are always centrally situated, and adjacent to the market. This is because Balinese kingdoms were defined, not by borders, but by their centre, which was the seat of power and influence. The traditional market, being the artistic and cultural place of society economics, was always located close to the palace.

Bali’s best known and most visited palace is Puri Saren, home to the Sukawati royal family. It sits opposite the market in the centre of Ubud and features a series of splendid pavilions with richly carved doors. Most of the buildings were designed by I Gusti Nyoman Lempad, Bali’s most famous architect, artist and carver, and were erected following a devastating 1917 earthquake. Puri Saren has been at the forefront since the 1930s in the development of cultural tourism. The front courtyard is open to the public, and traditional dance performances are held here every evening.

Further east, Semara Pura in Klungkung was almost completely destroyed by the 1908 Dutch attacks. The main gate is all that remains of the palace itself; the wooden doors were said to have shut by themselves at the time of this ‘puputan’ massacre, and no-one has dared to open them since. In the ‘Taman Gili’ gardens of this former palace, stands the 300-year old Kertha Gosa Pavilion. Surrounded by a moat, this is a superb example of Klungkung architecture, its dramatically painted panels, depicting the terrifying punishments that await sinners in hell.

Puri Agung Karangasem in the centre of Amlapura was built in the 19th Century by Anak Agung Gede Jelantik, the first king of the Karangasem Kingdom. This old palace complex presents a fusion of European and Asian architectural styles and features the Bale Kambang, which appears to float upon a pool, and was used by the royal family for entertainment and relaxation. Karangasem was at one time the richest and most powerful kingdom in Bali, and the water-loving Anak Agung Anglurah, the last raja of Karangasem built two water palaces: Tirta Gangga, a fabled maze of spine-tinglingy cold water pools and basins, spouts, tiered pagoda fountains, stone carvings and lush gardens; and Taman Ujung, an intriguing, romantic complex of pools linked by bridges, archways, and a shaded avenue of mango and frangipani trees.

The seldom-visited Pemecutan Palace in Denpasar lies in the very thick of the old city, it was the first of Denpasar’s royal houses to open its doors to visitors. In 1969, in order to cash in on the lucrative tourist trade, the puri began staging cultural and musical shows, giving foreign visitors the opportunity to appreciate the architectural beauty of the buildings, as well as the daily life of the royal family. In North Bali, the Singaraja Palace is famous its library, Gedong Kirtya, now a literacy museum with the most complete collection of lontar palm manuscripts about Balinese history, mythology and religion.

Finally, Tabanan Regency is home to the 17th-century Puri Anyar Kerambitan. Its royal family enjoyed great prosperity until the law of Land Reform in 1961 restricted ownership of land to five hectares per family. The family estate, which was then around 300 hectares, was taken and redistributed. Under these new circumstances, it became a challenge to maintain the palace, its grounds, and many temples. In 1967, the head of the present (seventh-generation) royal family had a vision to “share this gift of the ancestors” with the world, and he opened the palace for pre-ordered dinners and events. Feasts have been presented here for international ministers, ambassadors and celebrities including Mick Jagger, David Bowie, and Supertramp.