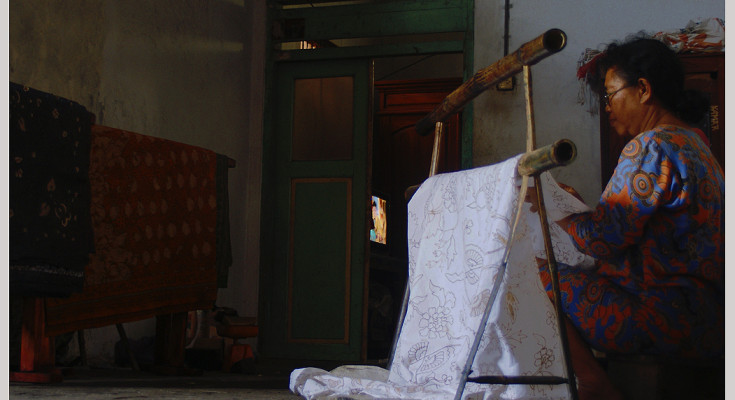 Batik is a cloth with distinct local and traditional patterns, created by a manual wax-resist dyeing technique. UNESCO designated Indonesian batik as a Masterpiece of Oral and Intangible Heritage of Humanity on October 2, 2009. As part of the acknowledgment, UNESCO insisted that Indonesia preserve their heritage. Then why would batik need reintroduction? This article talks about a kind of batik you don’t typically see: Lasem batik. 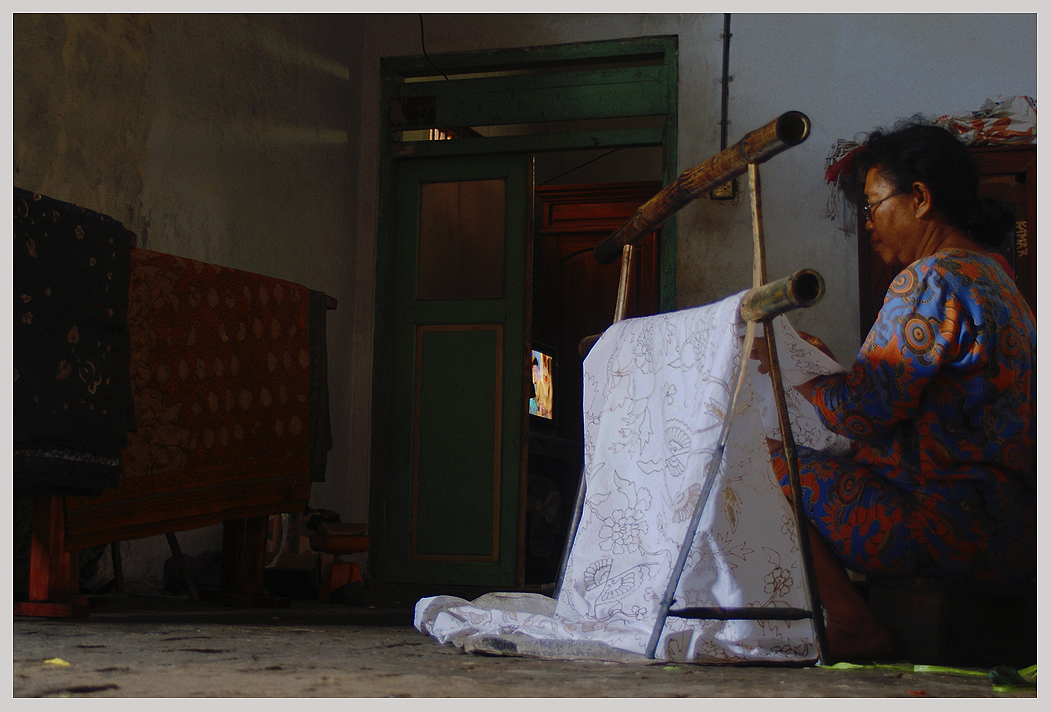 Home production of batik in Lasem, By: Labodalih Sembiring

The Javanese batik can generally be divided into two kinds: kraton (court) batik and pesisir (coastal) batik. The kind of batik motifs you are probably familiar with are the ones from Yogyakarta and Solo—the kraton type. Out of all kinds of coastal batik, generally the batik from Pekalongan gets into the limelight most often, even though batik from Lasem is just as fascinating, if not more. 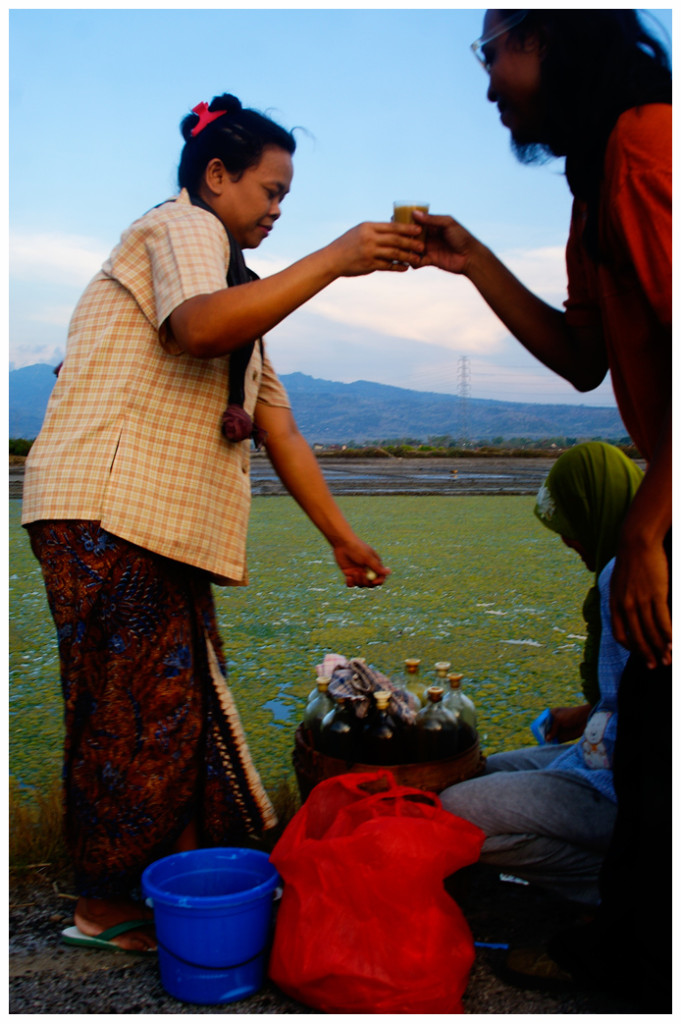 Lasem batik cloth in daily life, worn by a jamu peddler, By: Labodalih-Sembiring

Lasem refers to a subdistrict in Rembang, one of Central Java’s northern districts.

In the 16th century, Lasem was the center of a large region, one of many regions under the Islamic Mataram Kingdom. The rulers of Lasem made it a habit to bestow handmade batik from their area to the rulers in Mataram—Yogyakarta and Solo today—as gifts.

Lasem batik enjoyed fame from the 17th century until around mid 20th century, only to decline in both popularity and production from that point on, losing in terms of fame and production to the machine-printed batik.

Widji Soeharto is one of Lasem’s batik businessmen. Marrying a woman from a batik merchant family, he became the fourth generation of Padi Boeloe, a Lasem batik production brand since the 1800s. Speaking in labored breath as he suffers from a heart condition, he relates the bad years when Lasem batik had no buyers:

“It started in 1989. The business collapsed. I had to be content with eating just once a day,” he says standing in the porch of his huge, old home in Lasem’s Dasun Village. “A few years ago, a German tourist bought a piece of my inlaws’ classical batik for Rp1 million. I used it as a capital to rebuilt my business.”

Widji Soeharto and one of his most expensive batik, priced at Rp3.5 million. Notice Lasems signature red

In 1959, the Indonesian government issued a regulation which prohibited “aliens,” a term which sadly included the Chinese, from running businesses in rural areas. A substantial amount of Lasem’s population at that time consisted of Chinese merchants. The regulation forced them to leave for big cities such as Semarang, Surabaya, and Jakarta, turning Lasem into a maze of empty houses of beautiful Chinese designs.

According to data from Rembang’s Forum for Economic Development and Employment Promotion, in 1985 there were only seven Lasem batik merchants left. The number gradually rose to 28 in 2008. The common batik production practice in many areas in Java, including Lasem, is borongan: A brand owner applies the initial fabric coloring at one place and then hands the sheets to trained hands to fill them with brilliant motifs at their homes, a process which can take months. 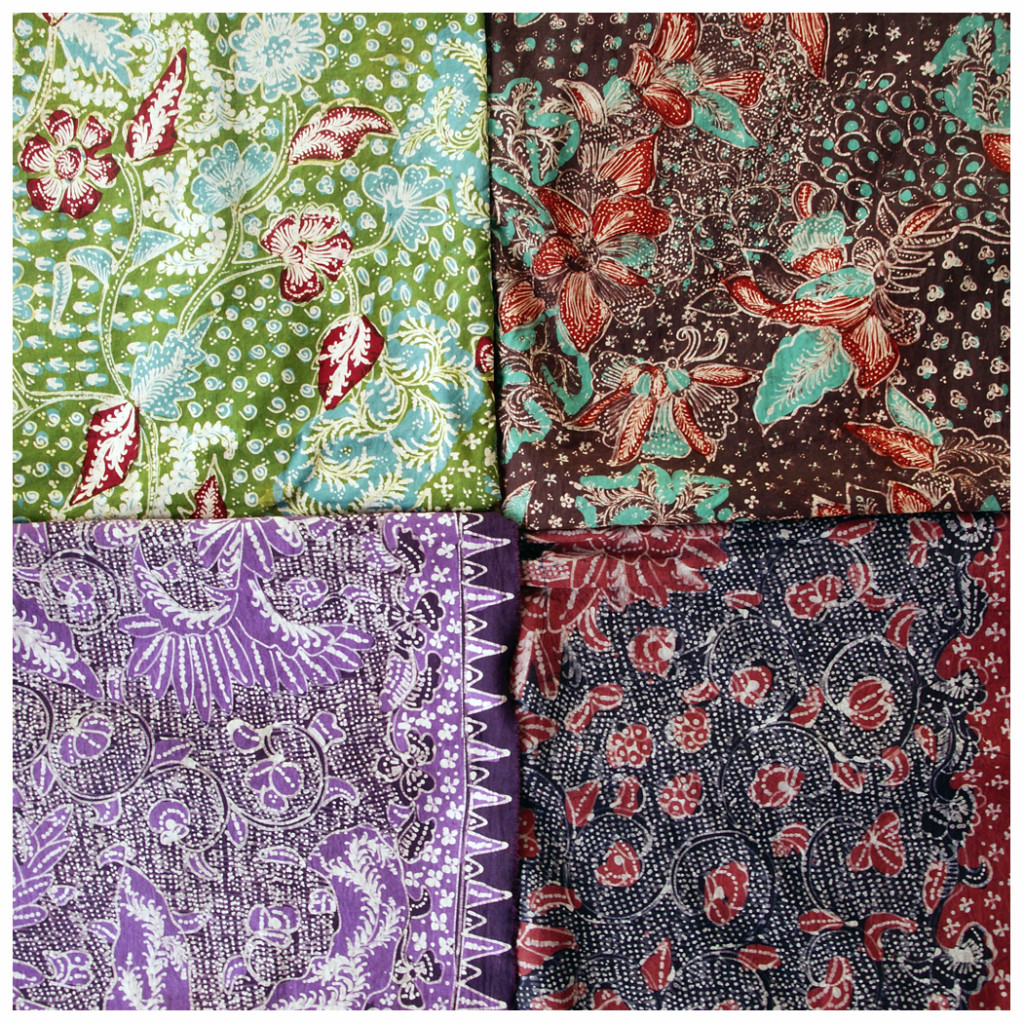 An attempt at recreating the tiga negeri batik, top side, By: Labodalih Sembiring

Henry Setiawan, Widji’s son, also owns a line of batik called Rajawali. He said that Lasem batik is similar to its coastal cousins, especially the Pekalongan kind, in terms of the use of vivid colors, which is completely different from kraton batik’s subdued, earthy colors.

“But Lasem batik is more intricate. The tanahan [background] is different because we add a lot of isen-isen [ornaments] to it, whereas in most Pekalongan motifs the background is left bare. This applies not only to the tanahan, but also to the main objects drawn on the cloths,” Henry said. “Lasem batik basically looks… busy.” To his father, the right word is “crazy.”

According to Parlan, a batik businessman from Lasem’s Sendang Asri Village, there are very few motifs that can be regarded as truly Lasem. “Maybe the sekar jagad and bledak are among Lasem’s only true motifs,” he said, although those motifs are so common in any type of coastal batik that tracing their origin is tricky. 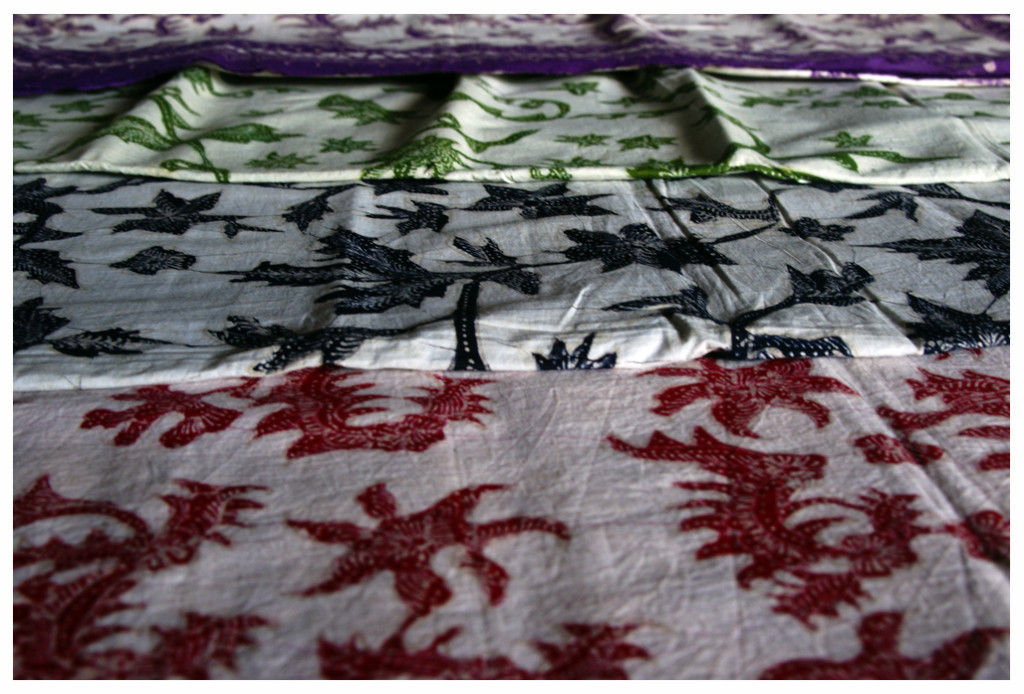 Bledak or 'unfinished' is one of the motifs found in many coastal batik, By: Labodalih Sembiring

However, there are the antique tiga negeri (three lands) and empat negeri (four lands) batik masterpieces. A piece of fabric was first processed and imbued with initial drawings in Lasem, and then brought to Pekalongan and Solo to be complemented with the latter lands’ own motifs. This was done to get certain color effects each place’s water was believed to be able to bring out. The “four lands” quality was achieved when the sheet returned to Lasem, which is famous for its bright red, for a final touch.

The dedication Lasem’s batik masters put in their art in the past is just one of the many reasons why the legacy of Lasem batik should be preserved.