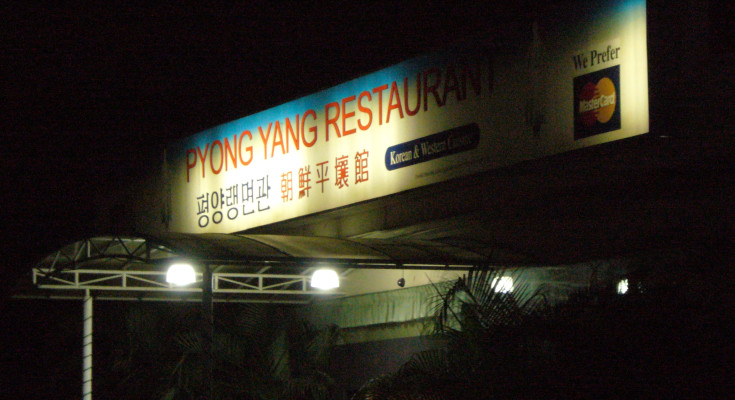 The Pyongyang restaurant Kuala Lumpur is a nice, clean, banquet style restaurant with the friendliest waitresses I encountered so far in Kuala Lumpur. The menu is diverse: from dishes I never heard of ― or I don’t want to eat like dog meat or shark fin soup ― to nicely barbequed meat dishes and tasty side dishes. Nothing much to talk about, or is there?

Before I visited the place, my mind wandered: this could be the ideal location for a spy novel and in my mind I saw North and South Korean diplomats striking deals. Questions also arose: what is a North Korean restaurant doing so close to the South Korean embassy and do I want to spend money in a restaurant where (part of) the proceeds go to the North Korean government, infamous for its seclusion and human rights violations.

Searching on the internet I found interesting background information. The facts are clear: the North Korean government needs foreign currency and this chain of restaurants named after their capital, provide that. According to Swedish journalist Bertil Lintner, the restaurants are one of several overseas business ventures of Room 39, a North Korean government organization dedicated to acquiring and laundering foreign currency. North Korean defectors report that the restaurants are run by local middlemen who are required to pay between US$ 10,000 and 30,000 each year to the North Korean government. There are over a hundred restaurants, mainly in China near the North Korean border, but in the 2000s the chain has been expanding into South East Asian cities including Bangkok, Jakarta, Pattaya, Phnom Penh, Siem Reap, Vientane and Kuala Lumpur. The latest addition and first Western outpost is one in Osdorp, Amsterdam, the Netherlands that opened its doors in February 2012.

The staff are attractive, graceful, ivory skinned young North Korean women in knee length traditional Chosŏn-ot dress (or Hanbok in South Korea), who also perform karaoke and do song and dance routines in the style of the North Korean Mass Games for the customers. They come from established families in Pyongyang and live on the restaurant premises and are said to be thoroughly screened for political loyalty. They seem to be closely watched by on-site North Korean security agents. In the 2000s, according to Daily NK, various (attempted) escapes by waitresses in China led to the closure of several restaurants and the repatriation of their staff.

The waitresses of Pyongyang restaurant on stage, By: Diana van Oort

Government propaganda is not overtly present in the restaurant; the walls are adorned with a series of monumental landscape paintings with snow-capped mountains or majestic waterfalls instead of pictures of the ‘great leaders’. Photography is forbidden in some and allowed in other restaurants. I managed to take one shot with my small compact camera before a waitress came over and told me it was forbidden to take pictures.

The restaurants are one of the few places where North and South Koreans can meet each other and feel they are still one family. After my dinner it was ‘show time.’ The repertoire included Korean pop and folk songs and even a song from the Carpenters. The aim seemed to showcase the culture and traditions of North Korea. The South Korean and Chinese clientele clapped and cheered.

A bitter aftertaste: guests can come and go as they please, but the young women are in fact ‘prisoners.’ They perform a balancing act: smiling and hospitable but never coming to close, always keeping a distance. They seem to cherish to live abroad and probably are better off then back home, where food is scarce and the control of the state likely even stricter. But how does it feel to be so close to freedom, to smell it and yet so far away?

After the show I asked for the bill and paid with a little tip. I got the tip back and when I told her she could keep it, she was clearly a bit distressed… No way could she accept a tip.