Luang Prabang. The city with a magical sounding name, which literally means ‘Royal Buddha Image,’ is an elegant place in north central Laos. The city is located on a peninsula at the point where the Mekong River and its tributary, the Nam Khan river, meet each other. A natural beauty of limestone hills surrounds the city, while the wide Mekong River meanders through the city. The town, the capital of Luang Prabang Province, was the royal capital of the Kingdom of Laos until 1946, when Vientiane took over as administrative centre. Since 1995 Luang Prabang is listed by the UNESCO as World Heritage. And rightly so. Luang Prabang offers a beautiful harmonious blend between the traditional Lao or Asian architecture and colonial French heritage in the 19th and 20th centuries.

What to See in Luang Prabang

The most beautiful architecture in Luang Prabang, including Buddhist temples (wat), residential-, commercial and institutional buildings, is to be found in the old part of the town. This is a small area of around1 km by 300 m, located at the very end of the peninsula, with only four parallel streets over the length of the peninsula and plenty of side roads, alleys and dead ends to keep you busy. 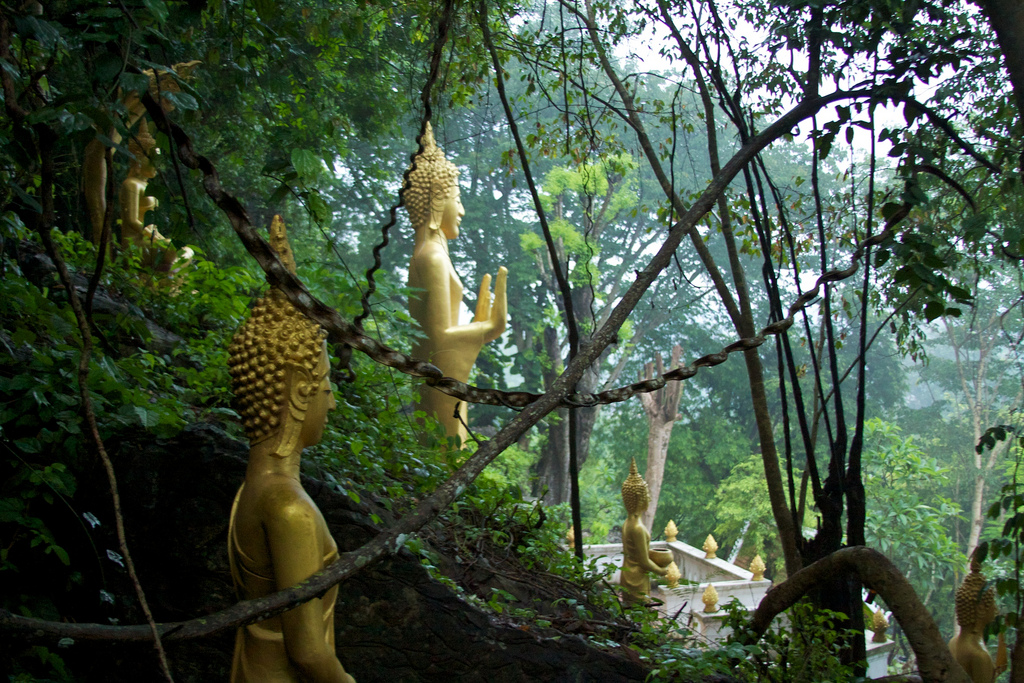 Each neighborhood has its characteristic buildings and charm. If you have limited time in Luang Prabang, organize your days beforehand carefully. This prevents you from ending up strolling around feverishly from street to street, alley to alley, not seeing any of the important temples, impressive palaces and museums from the inside.

In my case, my eyes were captured constantly by the most beautiful restaurants, shops, houses and mansions in a mix of indigenous, Chinese or French-inspired styles. I spent most of my time sitting on the terraces of restaurants, eating all kinds of delicious food for low prices (a complete menu with lots of beer for $10 is no exception), staring at the well preserved buildings around me, enjoying the peaceful view of the Mekong and the Nam Khan, and strolling around the night market, hunting for Lao crafts and textiles. This is relaxed approach is perfect to discover Luang Prabang, if you have a week or more to spend. Otherwise, you better make a ‘must see’ list before you set foot in Luang Prabang. This list below might help you out:

Located on the bank of the Mekong River where the Nam Khan runs into it, the Wat Xieng Thong was believed to be the entrance of the city. The Wat Xieng Thong is known as the temple of the Golden City. It is one of the most important temples of Laos with the most refined architecture. It was this temple which convinced the UNESCO to classify Luang Prabang as a World Heritage Site.

Xhian Thong Temple from the inside, By: Magical World

The temple is built around 1560 by King Setthathirat who ruled from 1548 to 1571. It was the place where the former kings of Laos were crowned and granted their power. A number of restorations have taken place in the 20th century, including one with participation from the French. During the 1960s, the temple was completely remodelled and redecorated. 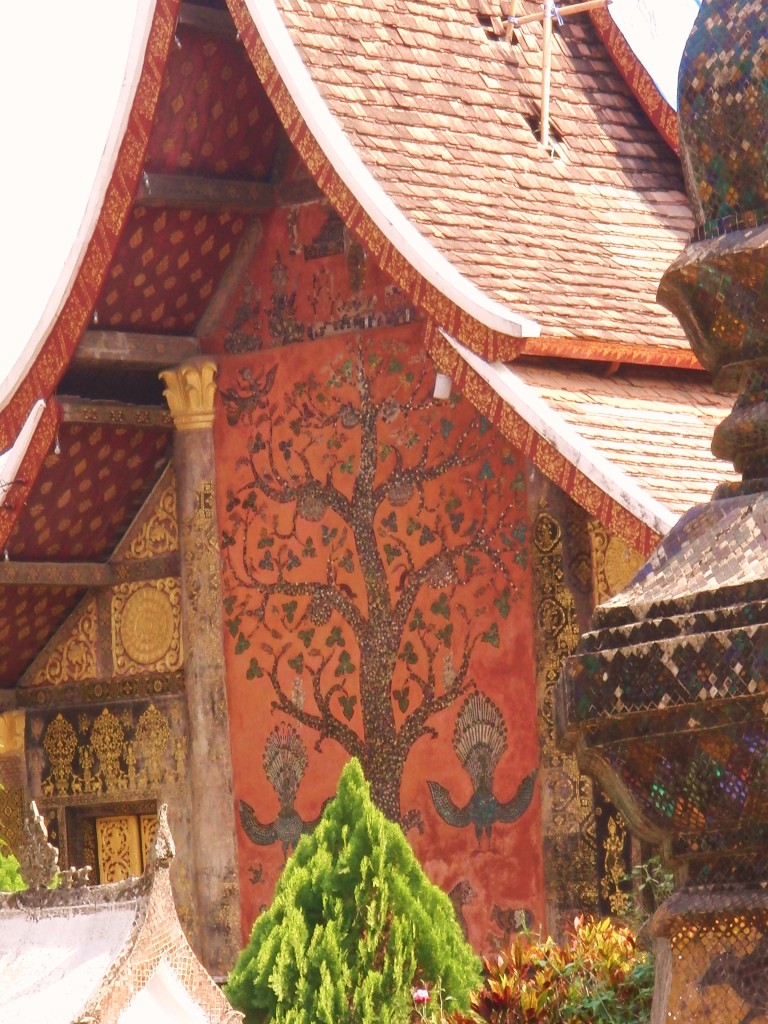 The Red Chapel, By: Maya Liem

The temple is famous for of a couple of extraordinary elements, such as the large sweeping roof of the central building (sim) with its many decorations. Both the interior and exterior walls of the sim are covered with black, glossy lacquer and decorated with figures and symbols in gold leaf. The ‘tree of life’ mosaic in coloured glass on a dark red background is the most spectacular element of the sim. And then on the left side of the sim there is the Red Chapel, another must see: the exterior walls are decorated with mosaic in lively colours on a red background in the most charming naïf style, made by Lao craftsmen in the 1950’s. Red Chapel also houses the statue of a black reclining Buddha which has been imported to Paris for an exposition in 1931.

Mount Phousi is geographically and spiritually located at the centre of the town. Believed it was the living area of a mighty Naga, the hill was considered to be the small version of the Mahameru (the most sacred mountain of the Hindu-Buddhist cosmology). Mount Phousi has temples scattered on all sides of its slopes and a panoramic view of the entire city from its summit. The top of the hill is marked by the That Chomsi stupa (built in 1804) with its golden peak which can be seen from afar. Taking the path to the northeast, you will pass Wat Tham Phousi, which has a large-bellied Buddha, Kaccayana. Wat Phra Bat Nua, farther down, has a yard-long footprint of the Buddha. Be prepared for the 355 steps to get there. Try to make the hike, which will take about 2 hours with sightseeing, in the early morning or late afternoon to escape the midday heat. It is also a great spot to watch the sunset. 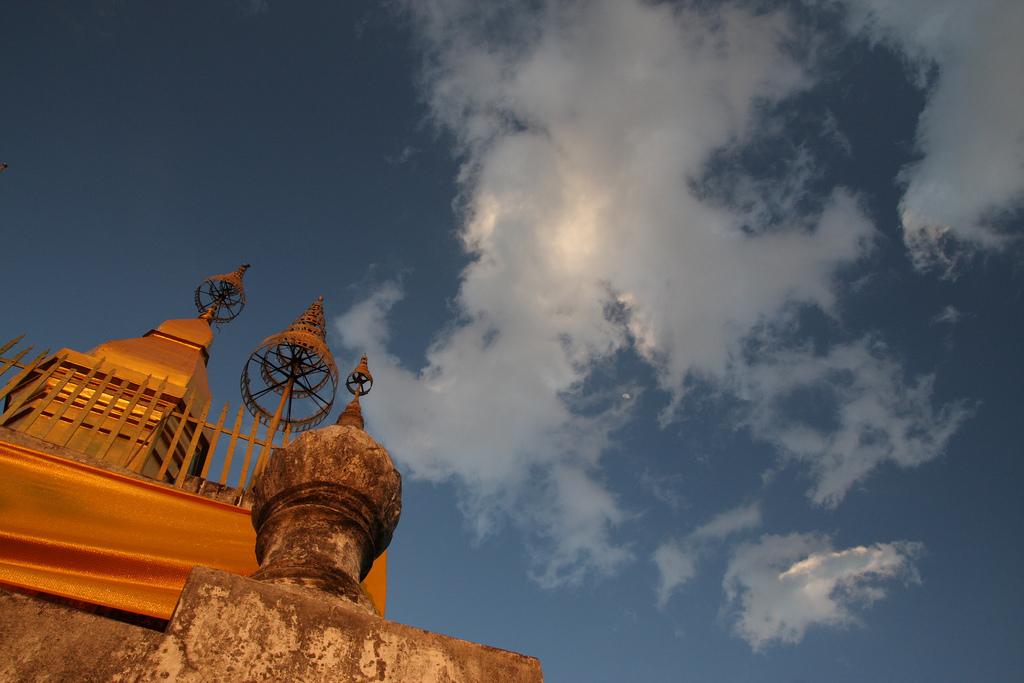 Wat That Chomsi at the top of Mount Phousi, By: Yeowatzup

Located between the Phousi and the Mekong the palace was built in 1904 during the French colonial era for King Sisavang Vong and his family. After the monarchy was overthrown by the communists in 1975, the palace was converted into a national museum. The French planned to build a new palace with a tower in European style, but the king urged for the shape of a stupa peak. The result is architecture with a mix of traditional Lao motifs and French Beaux Arts styles. Inside the building there is the stunning collection of the palace’s most prized art, consisting of statues, sculptures, screens, paintings, silver and china from all over the world.

Luang Prabang across the Mekong River

Very little tourists take the effort to cross the Mekong river and to explore the tiny and quiet village Xieng Men. It is really worth it to escape the hustle and bustle of Luang Prabang for just a while and to enjoy the quietness of village life. Taking the path from the pier of the jetty to the right, in the direction of the village, you will pass some noodle shops and traditional village houses. 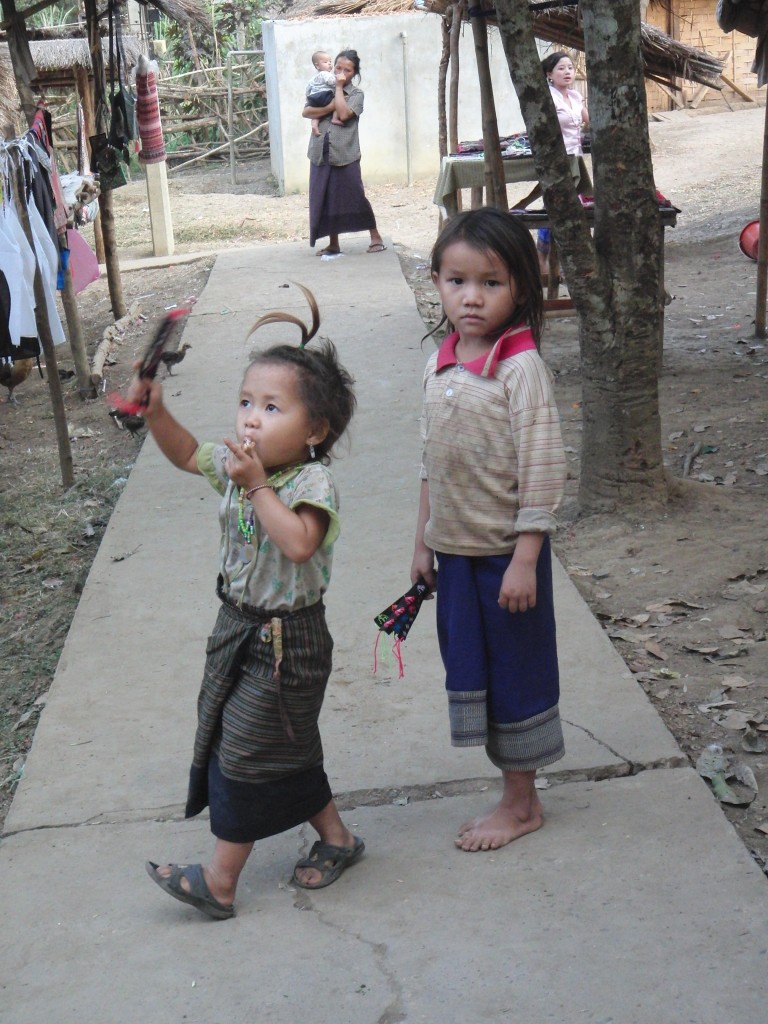 If you are in the mood for a temple tour, then there is the Wat Xiengmene with its beautiful original doors, built in 1592. In the bamboo forest behind the Wat Xiengmene is the graveyard where members of the royal family who could not be cremated for religious reasons rest. Farther up to the village you will see the Wat Long Khoun.  Because of its remoteness, the temple was a very special place where former kings of Luang Prabang used to retreat, take a ritual bath and meditate before the crowning.

Take a bicycle ride to handicraft villages across the Nam Khan river. Cross the Sisavangvong bridge and take a left at the first road. Having passed the Wat Phan Luang, follow the road along the Nam Khan through villages to see local weavers, paper makers and artisans making pottery. You will be able to find the same products at the night market, but in these villages you will see first hand how traditional crafts are produced and understand how much hard work goes into creating each product.

It was also in this area that I watched Buddhist monks marching through the streets at 6 a.m.   receiving alms from the local people. The peaceful procession of the monks was worlds apart from the daily spectacle on Sisavangvong and other big roads, where tourists crowd the streets to see the monks and sadly enough seem to view the morning parade as a show for their benefit, and fail to respect local customs. 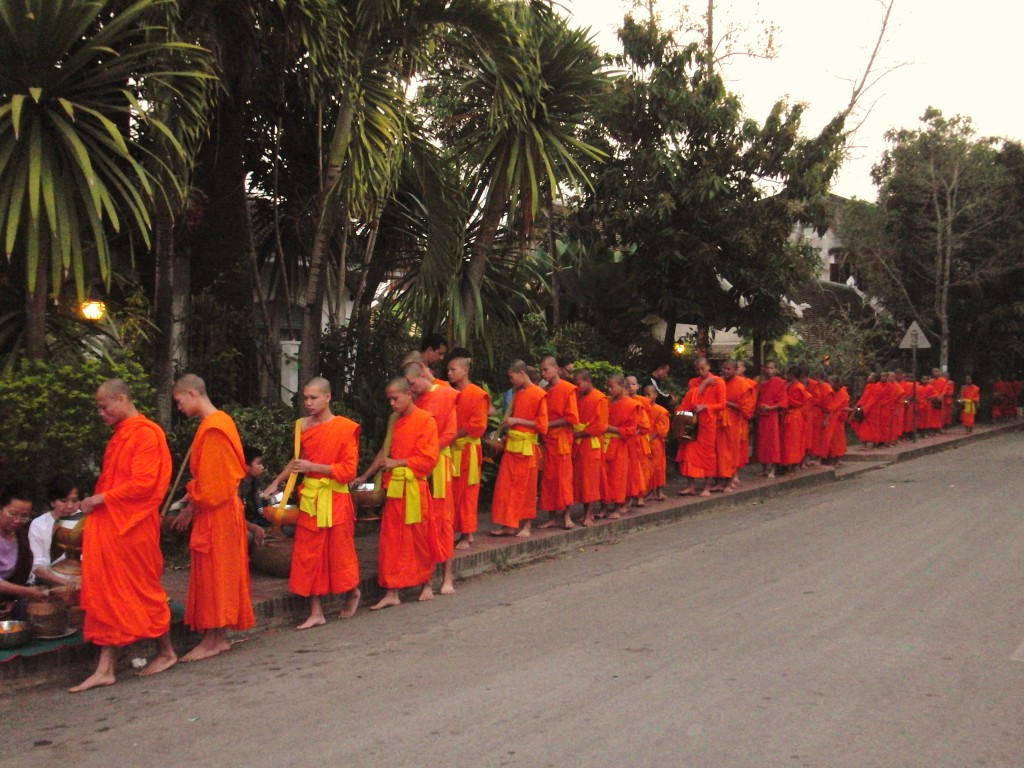