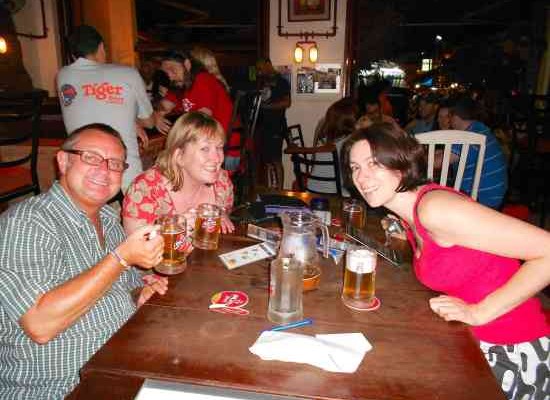 Let’s get Quizzical in Siem Reap… 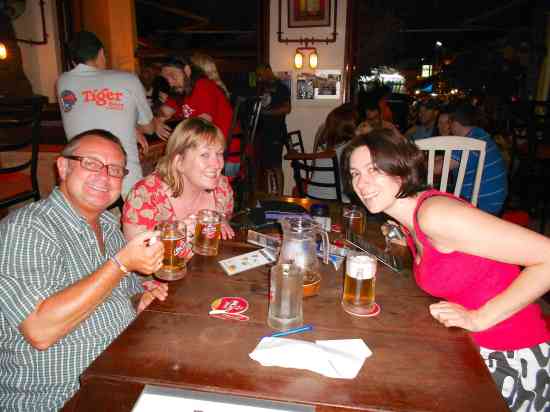 Flexing the old grey matter for charity in the Warehouse, By: Simon Hare

Time for something a bit controversial: Anyone who stays longer than 3 days in Siem Reap might just  risk getting bored of 1000 year-old temples, fish pedicures and cheap beer. There, I’ve said it. *Ducks for cover*.

But something else tends to happen when visitors stay longer too. They can’t help wanting to do something to help alleviate the poverty that hits you like a fist once you venture beyond the well-trodden tourist streets of the town’s buzzing centre.

But the perils of misguided acts of spontaneous philanthropy are well documented, so anything that keeps the longer term visitor amused and takes the mental anguish out of working out how to give responsibly, must surely be a win-win situation…Ladies and Gentlemen I give you: the Siem Reap charity trivia quiz circuit.

It’s a genius concept that started at the now defunct Funky Monkey with a weekly quiz night in aid of local good causes. Siem Reap now boasts four regular quizzes, all with their own distinct vibe – one weekly, one twice monthly and two monthly – so you’d be hard pressed to find yourself stuck in Siem Reap without an opportunity to flex the old grey matter, win a few beers and a couple of raffle prizes, and help out some genuine good causes.  So, here’s our anything-but-trivial guide to the town’s famous trivia quiz nights…

Molly Malone’s Irish Pub, is slap bang opposite one end of Siem Reap’s hedonistic heart – Pub Street – making it the perfect spot to enjoy the craic any day of the week. But its twice-monthly quiz gives you one more reason to stop by and savour the warmth of the Khmer-Irish hospitality that consistently  draws a congenial crowd of Brits, Australians and Europeans – a mix of tourists, expats, volunteers, and guests staying in the pub’s upstairs rooms. It’s a huge but cosy place so there’s plenty of room for lots of teams, and it has an extensive Khmer and western menu so you can feed your brain before battle commences. 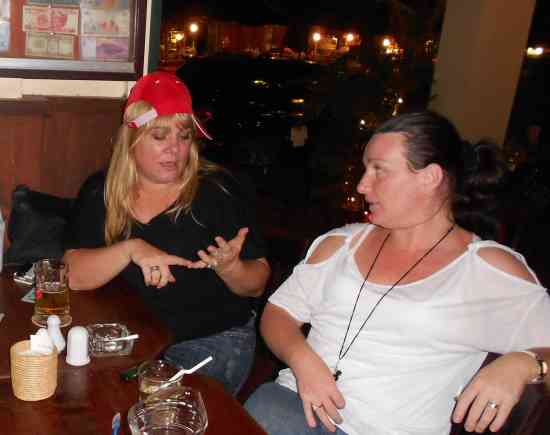 Quizzical looks in the Molly Malone's, By: Simon Hare

Regular quiz rounds include all the trivia staples but question-master Kerry, a former teacher from Hawaii knows how to mix it up to make sure that every team is in with a chance of victory and the winners’prize of two pitchers of draft beer. A recent round on “homonyms” (Google it!) certainly helped to sort the men from the boys. Just don’t even think of challenging Kerry as we all know that teacher is always right.

If trivia is not your best subject, you could still end up top of the class, albeit by luck rather than skill, by taking home one of an eclectic assortment of raffle prizes – such as a litre of gin or vodka, an hour’s horse trekking, or a hand carved wooden fountain pen, all donated by local businesses.

And if the luck of the Irish fails to send a raffle prize your way  you could still win a tidy cash sum in the pub’s “snowball” jackpot where one punter gets to find the elusive joker from 53 playing cards pinned faced down on a giant board.  The prize pot goes up by $10 each week until it is won, with the last lucky winner walking away with almost $400.

To date the highest amount raised at a single quiz was just shy of $700 on behalf of New Era, an Australian-run education project for children in Siem Reap’s impoverished rural areas, 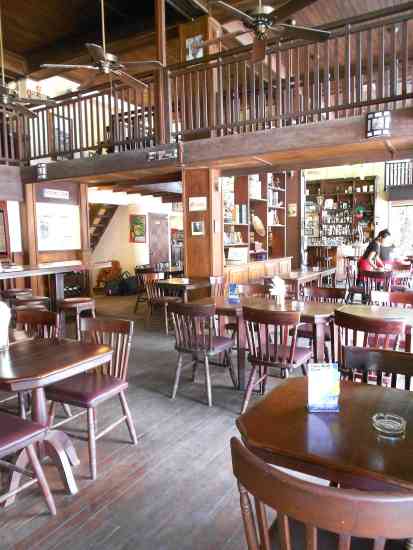 When: Second and last Friday of the month, 8:30pm

Where: The road that runs from Pub street to Sivatha Boulevard

Insider Tip: You may get the odd question about Hawaii…

The Warehouse Bar hosts Siem Reap’s only weekly quiz in aid of four regular good causes – Grace House Community Centre, The Women’s Resource Centre,  ABCs and Rice, and Jay’s School. Like Molly Malone’s the bar’s location just off Pub Street makes it a popular Thursday night option with tourists and backpackers from all over the world as well as the local expat crowd.

The two storey bar can fill quickly on quiz nights so reserving a table is a good idea if you like to see the whites of American quiz master Kurt’s eyes. Alternatively  the bar’s highly efficient AV setup means that even in the quieter upstairs bar, (with pool table – just in case some members of your team find the questions too difficult) you can hear the quiz master and see the big screen for Kurt’s regular picture questions which can include figures from history, contemporary “celebs”, and classic cars and motorbikes.

Rivalry amongst regular teams is intense, which makes it all the more fun when a visiting team wins.  And if winning free beer is not enough incentive to beat the competition, then avoiding the booby prize of garlic shots for every member of the losing team should bring out the best in even the least competitive of players. 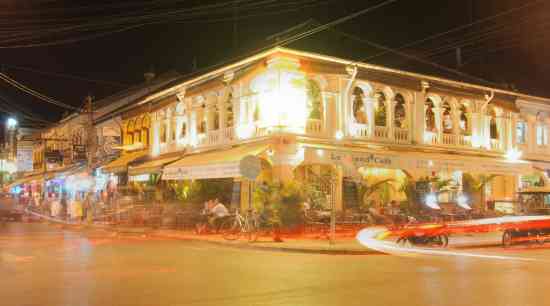 A one-off quiz on behalf of the Globalteer Siem Reap Junior Soccer League – a soccer league run by a UK charity for over 450 children in 15 local schools and NGOs  – saw The Warehouse’s most successful fundraising quiz to date, raising an amazing $663.

The recent addition of some classy new terrace furniture has increased capacity downstairs at The Warehouse, and means you can now sit outside for a spot of people watching, or just admiring the view as you pretend not be taking the quiz too seriously.

The Warehouse – the lowdown

Where: On the crossroads by The Old Market’s North side, opposite The Grand Cafe

Insider Tip: Revise your Cambodian provinces to increase your chances by one point… 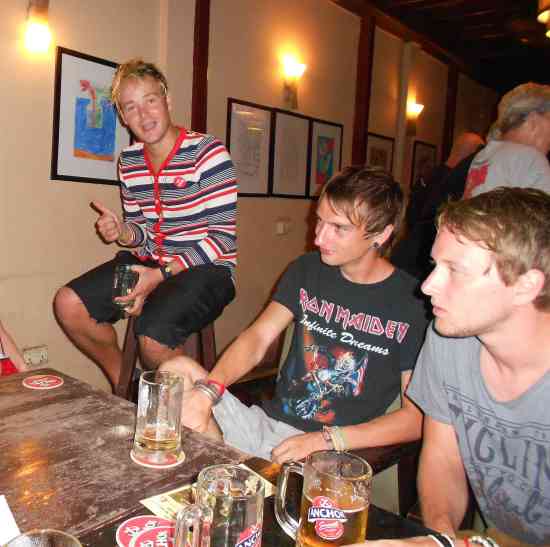 Fresh at Chilli Si-dang is a much more intimate bar on a quiet riverside setting near the town’s biggest working monastery, and is the scene of a lively quiz on the third Friday of every month.

The bar’s owner, question compiler and quiz master is 30 year-old Matt, a dreadlocked young Australian with a passion for surfing and road tripping – although he assures me that these nuggets of personal information will do nothing to give readers an edge over their rivals. He promises with a grin, that answers can be bought from him at $50 a shot, which is donated to that month’s good cause. He doesn’t, however, divulge whether anyone has ever actually bought an answer…

Matt describes his quiz as slightly “cookie” which he claims is a great leveller and means that anyone is in with a chance of winning. Punters never know quite what to expect other than the fact that it is five rounds of ten questions each. A recent quiz in aid of the Landmine Museum which helps fund ongoing demining, a home for landmine victims and a rural school, was conflict-themed, and the top two teams were separated by just half a point. The battle for glory was so close that some people took the conflict theme a tad too seriously…

The raffle features a host of desirable goodies such as meals at local restaurants, free stays at Siem Reap hotels and bottle of fine wine. The night of the Landmine Museum quiz had some pretty unique prizes up for grabs too, including jewellery crafted from recycled parts of unexploded ordnance from the Cambodian countryside.

Unwanted raffle prizes are frequently auctioned off to the highest bidder so if your ticket doesn’t come out of the hat you may still get to bid for whichever prize you have been coveting. One auctioned prize famously fetched an additional $65 for the charity of the night.

The cosy bar has limited space so make sure you get there early to bag your lucky table, and enjoy some of the popular food on offer from hummous and olives to steaks, burgers, fish & chips and pasta.

Fresh at Chilli Si-dang – the lowdown

When: Third Friday of the month

Where: On the east side river road, between street 22 and street 23

Insider Tip: You may well be asked “How long is a piece of string?” 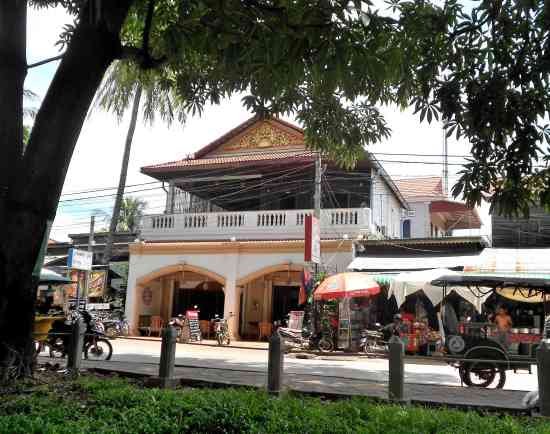 Rosy Guest House has a framed certificate from The Angkor Children’s Hospital propped up a little incongruously amongst the other more usual food and beverage paraphernalia on the bar. It was presented to co-owner Rachel Band after their monthly quiz raised a huge $646.75 to help the hospital cope with a serious outbreak of dengue fever.

As Rachel explained “the Children’s Hospital treated my little girl so well when she was very ill that it was only natural that we should try to help when they needed it”.

The Guest House enjoys a quiet location amongst swaying trees opposite the Royal Palace Gardens by the Siem Reap River. Mind you, you are unlikely to hear the gentle rustling of the leaves on one of the famously rowdy quiz nights. Its highly rated food – think huge pork chops, chicken breasts wrapped in bacon, traditional pies and burgers – helps to make it a very popular Friday night out, so getting there early, or reserving a table for your team is strongly advised.

Rosy’s amazing raffle prizes have definitely boosted the guest house’s fund raising: a flight to Sihanoukville, meals at some of Siem Reap’s best restaurants including Cuisine Wat Damnak and Abacus, and a $50 voucher for Siem Reap’s classiest tattoo parlour.

The quiz has been running once a month since January 2010 and to date has raised around $7,500 for worthy causes in the Siem Reap area. Like all the other charity quizzes in town, Rosy Guesthouse only helps NGOs and projects that they know are focused on providing long term and sustainable solutions for Cambodia’s needy.  So if you come along and lend your support you can be confident your money is going to a genuinely good cause.

When: First Friday of the month

Where: River Road East, Just north of Route 6, opposite The Royal Place Gardens

Insider Tip: The current quiz master hails from Darwin, but he’s off to pastures new. So, why not support the new kid on the block and give it a try – as they say, try something new and anything could happen…

One thought on “Let’s get Quizzical in Siem Reap…”