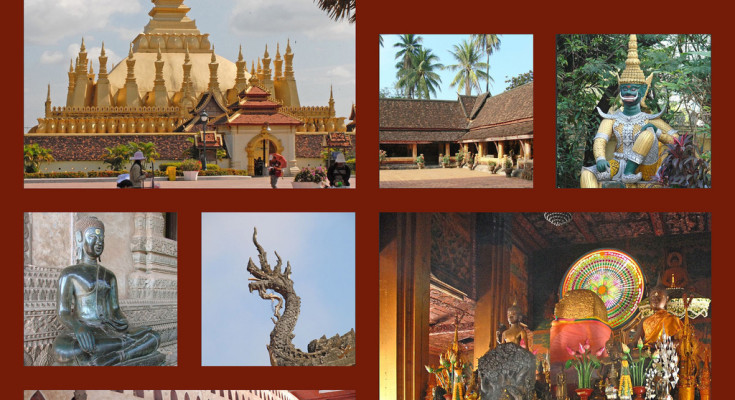 “Is this the best apple pie that I have ever tasted in my life?” My grandma might have been offended by this thought, but I couldn’t stop this from entering my mind while savoring my sweet reminder of home at a cafe in Vientiane. 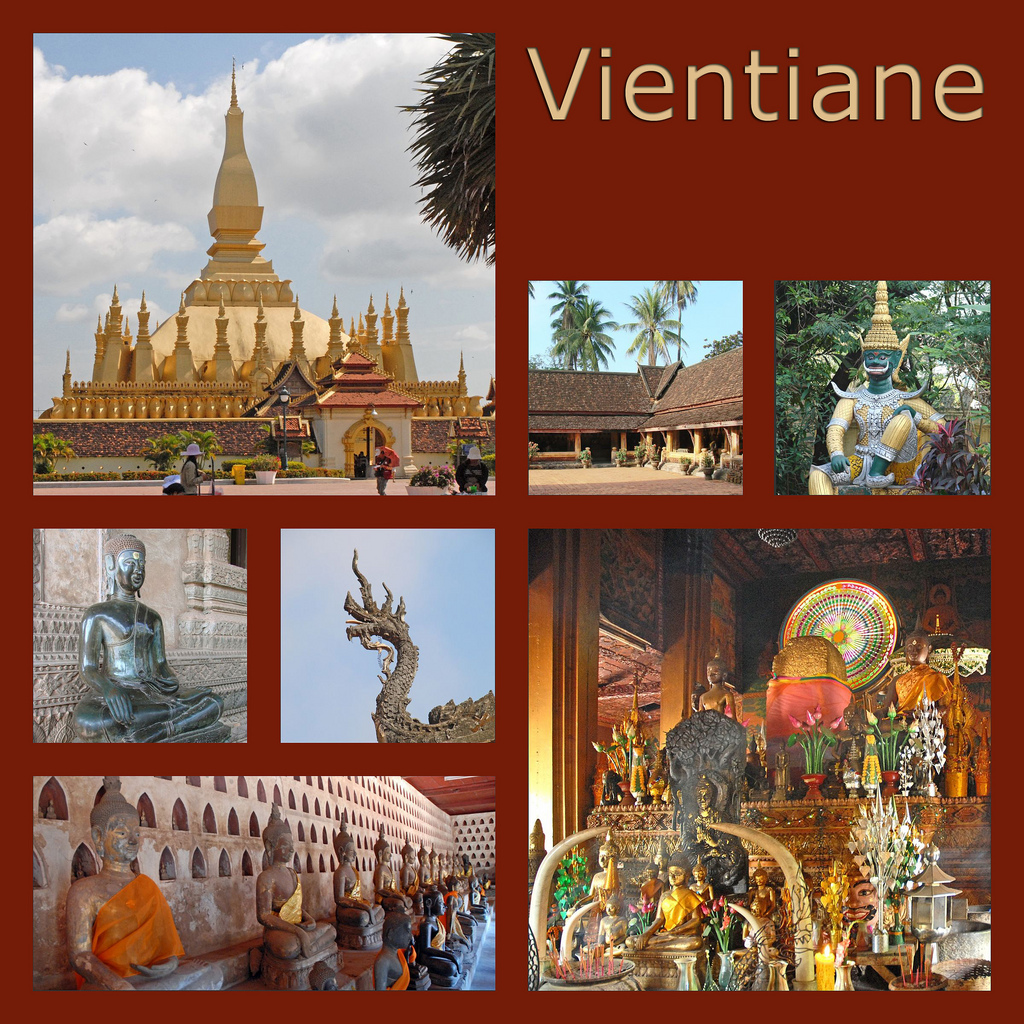 Sights in Vientiane, By: Jean-Paul Dalbera

Compared to other Southeast Asian capitals, Vientiane is a sleepy destination. Many travelers have commented on how boring they found the place. In fact, Vientiane is one of the most charming cities in Southeast Asia. It’s only the party and booze crowd applying the “boring” label to Vientiane. The city is not an all night party spot but the capital of a still largely traditional country with a government believing in control. However, more seasoned travelers appreciate the city’s cafes, modest sights, charming residents, and easy going pace.

One cultural trait people notice when entering Lao is the friendliness and honesty of the people. Vendors are typically (but not always) less pushy and take a gentler attitude towards potential customers. This blends well with Vientiane’s cafe culture centered around Rue Setthathathirath near the Mekong River and bordered by Avenue Lanexang, Rue Samsenthai, and Rue Chao Anou.

The cafes might retain some French influence but most were recently opened to capitalize on the tourism boom. They offer an array of often locally grown coffees and teas and some of the finest baked goods in Southeast Asia. In fact, most Laotian restaurants have baguette sandwiches on the menu along with traditional foods.  Some cafes such as Joma Bakery Cafe on Rue Setthathirath even feature obscure baked goods such as nanaimo bars, fruit pies and crumbles. The Scandinavian Bakery next to Nam Phou (Fountain) Square is another place to sample a variety of baked goods. For pizza along with sweet baked treats, try out the Swedish Pizza & Baking House on Rue Chao Anou. Excellent French, Italian, and fusion food is available at a number of locations on Rue Hengboun and near Nam Phou (Fountain) Square.

Things to See in Vientiane

Most people would classify the sights in Vientiane at mediocre, but there are a few worth a look. If time permits and temple viewing is your passion, then you might be inclined to look at more sights than the ones mentioned below.

Patuxai or Victory Gate is the most readily visible landmark in the city. It’s in bad need of restoration, but the climb to the top is worth the views. From this perch, you can take in the surrounding government buildings, identified by their red roofs and well kept appearance. 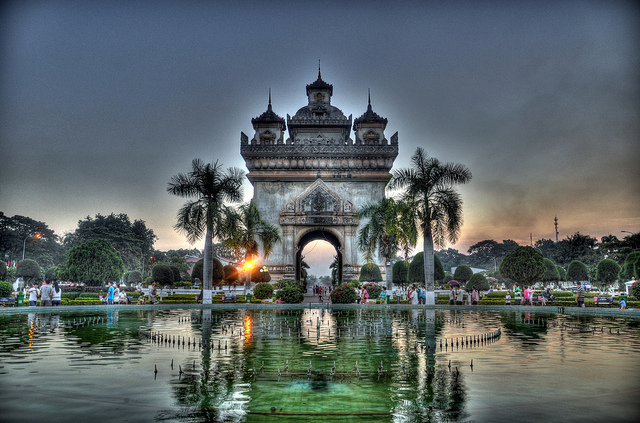 That Luang is the most famous symbol of Laos. This temple has a unique design with its stupa surrounded by fortress like walls. Paying to enter the central courtyard is only necessary for the most devout temple lovers. However, one may want to take a look at the neighboring temples, Wat Luang Nua and Wat Luang Tai.

That Luang from the central courtyard, By: Isaac Olson

Unfortunately, there aren’t many good history museums in Southeast Asia and the Lao National Museum is no exception. It is however worth a look because one can piece together enough of Laos’ history and national attitude to understand the country better. To get a close up look at old communist military equipment, head to the Lao People’s Army History Museum. Although, the few display captions in English are generally incomprehensible.

Other sights worth a quick look are Wat Ho Phra Kaew. This temple used to house the same Emerald Buddha that now sits in Wat Phra Kaew in Bangkok, since  it was stolen by the Thais in a 19th century war. Right next door is the Presidential Palace, which can be peered at through the gates and admired for its colonial architecture. That Dam is a random old stupa sitting on Rue Chanthakoummane near the U.S. Embassy. Nam Phou (Fountain) Square is currently under renovation with Chinese money. Lets hope that when it’s finished, it will be more tasteful than other Chinese funded construction projects in Laos, but, don’t hold your breath.

Other Ways to Stay Occupied in Vientiane

Along with the cafe culture comes a number of book stores with many English and French titles. Several used book stores exist where travelers can swap their old titles out. Lao massage should also be tried. It involves a lot of pressing and is gentler than Thai massage. A number of spas also offer treatments with traditional herbs. For transportation, the flatness and compact size of Vientiane, lends itself to bicycle riding. All significant places of interest can be reached by bicycle (10,000 kip for one day rental) on relatively open roads featuring better drivers than in neighboring countries. Another good way to enjoy the fresh air is by strolling along the newly renovated river front park.

A couple of days in Vientiane is all one needs to recharge before continuing that Southeast Asian odyssey. Travelers can treat themselves to some western goodies at the cafes and use the wi-fi to update that blog which hasn’t seen a post in weeks. Remember to just grab a baguette and Beer Lao and take it easy.

A cool breeze and a cold Lao beer at the Mekong, By: Davidlohr Bueso

Vientiane can be reached using Lao Airlines or Thai Airways, but most travelers cross over using the friendship bridge located near Nong Khai in Thailand or bus it south from Vang Vieng (4 hrs or more depending on road conditions). The friendship bridge is 30 kilometers from Vientiane, but a small local bus (20 Thai baht or 4-5,000 Lao kip) can be taken. There are also buses (10-12 hrs, Northern Bus Terminal) and overnight trains (12-15 hrs, Hua Lamphong and Bang Sue Stns) from Bangkok to Nong Khai.