Home Lifestyle Bangkok Living Costs, a City that Caters to All Your Wants and Needs 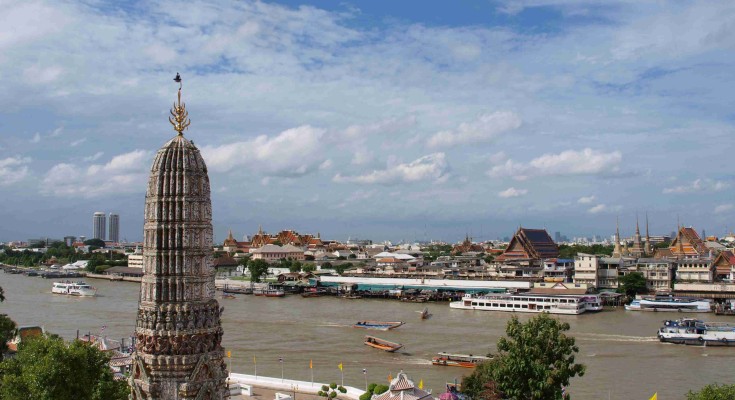 Bangkok Living Costs, a City that Caters to All Your Wants and Needs

One major draw to Bangkok is the city’s reputation for having a low cost of living, which helps attract people from nearly every corner of the globe. However, maintaining a low cost of living is only possible with self discipline. Being a globalized mega city, Bangkok caters to all classes and price ranges. One can easily spend just as much money as in any other global city, since there are plenty of temptations competing for your baht. It can certainly be a low cost place to live with a little self discipline, but the temptation to scale up is always present. 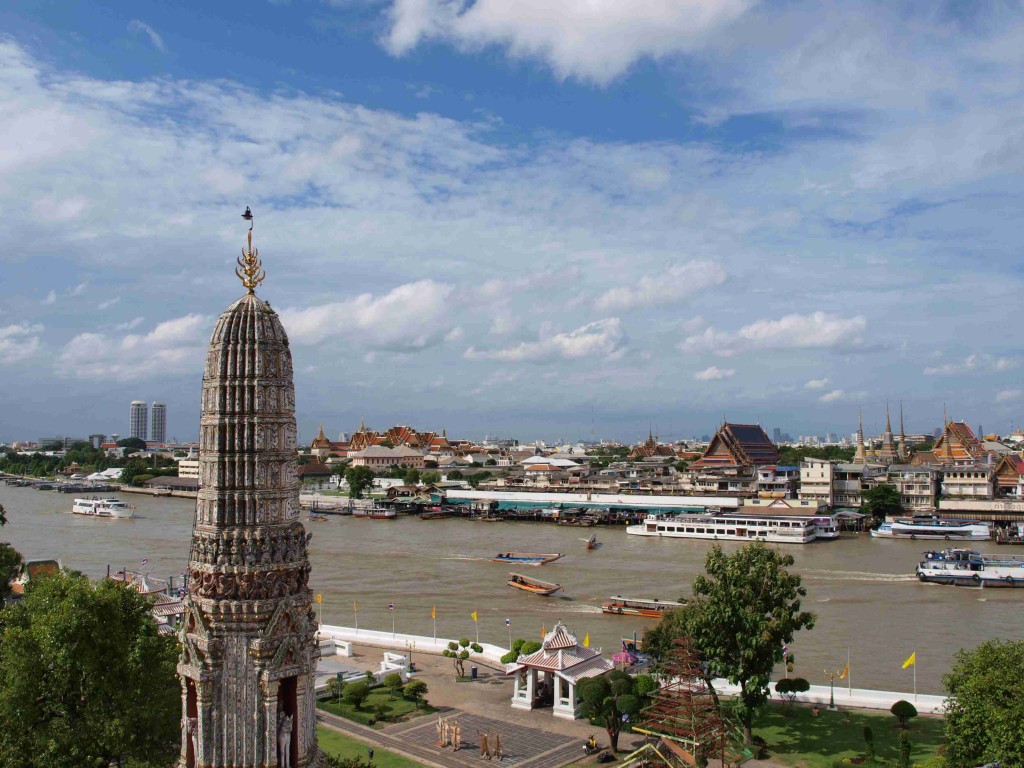 View of Bangkok from Wat Arun, By: Isaac Olson

Below are expenses contributing to the monthly cost of living in Bangkok.

Like any city, location is everything. If you would like to live in or near one of Bangkok’s commercial areas (Sukhumvit Road, Siam Square, Silom) and on the skytrain (BTS) or subway (MRT), then prices will be considerably higher. However, you can still live close to the skytrain or subway but away from the main commercial areas and find that rent is a lot cheaper. As a rule, the further afield, rent becomes dramatically cheaper and cheaper.

Bangkok has a plethora of condos which are typically modern buildings that have extra common facilities such as a swimming pool and fitness center. Each unit has a different owner and therefore landlord. Most have a kitchenette or even a full kitchen. Condos start at about 10,000 THB (315 USD) for one room units, and if you would like a separate bedroom, living room, or kitchen, expect to pay at least 15,000 THB (475 USD). However, double these prices for popular commercial districts, and luxury units for over 100,000 THB (3,165 USD) are common. Complete houses walled in with a yard and row houses are also available in Bangkok and fall in the price range of condos, but are not usually available near popular commercial districts. 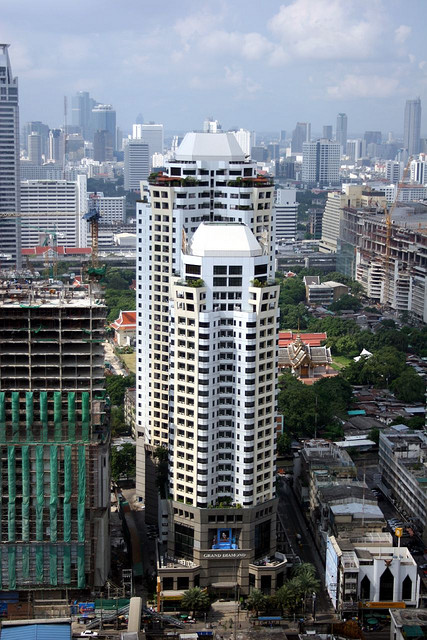 Living in Bangkok, By: Jennifer Williams

Next in price range are apartments, which are similar to condos but generally older and with less facilities and services. However, this is not always the case since the main distinction is that the building has one owner. Units also might or might not have a kitchenette. Apartment prices range from about 8,000 THB (255 USD) and up to the same range as condos, depending on the facilities. The most ubiquitous accommodation on the market are one room studios which almost never have a kitchen (but maybe a small refrigerator) and possibly not even a sink. Studios can be found from 3,000 – 8,000 THB (95 – 255 USD) depending on their location, but ones on the cheaper end are often only about three kilometers from the skytrain or subway.  Air conditioning is offered in every type of accommodation but some studios might lack it.

Utility costs are quite cheap. The price of water is incredibly low. Internet ranges from 600 – 3,000 THB (20 – 95 USD) depending on the speed. The cost of electricity varies quite a bit from person to person depending on how addicted one is to air conditioning, but should range from a minimum of 800 THB (25 USD) for a studio and at least 1300 THB (40 USD) for a 2 bedroom apartment or condo. However, these are minimums which assumes that fans are the rule and air conditioning is being used very sparingly. For people who have air conditioning on all the time, the above rates need to be doubled, easily tripled, and sometimes quadrupled. On the other hand, many people have electric bills even lower than the amounts quoted above.

Bangkok has some of the cheapest food in the world, but prices have been sliding upwards or portions downwards. Generally, local food is a lot cheaper than foreign. Eating at a basic Thai restaurant or from street vendors costs 30 – 90 THB (0.95 – 2.85 USD) a plate. Any food considered foreign will not start lower than 80 THB (2.55 USD) at a Thai restaurant or fast food joint, but at primarily foreign establishments expect to pay at least 200 THB (6.35 USD) for a meal and prices go up like mad from there. 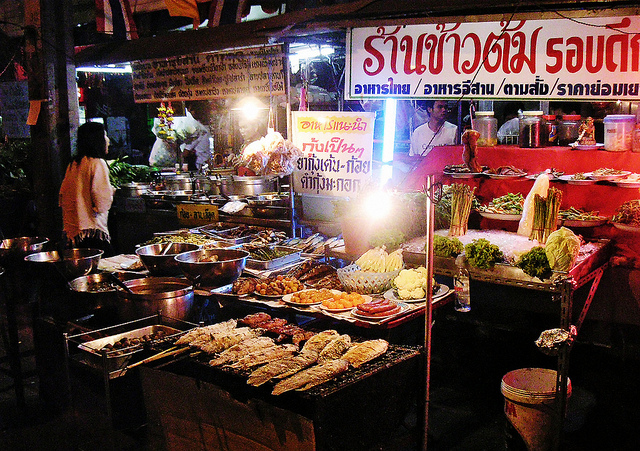 Of course, groceries are cheaper than eating out, but that is if you only buy local produce. Fruit and vegetable markets are insanely cheap. A kilogram of fruit is 30 – 80 THB (0.95 – 2.55 USD), and peeled and sliced fruits are everywhere for 10 THB (0.30 USD). A bag of vegetables costs about 30 – 80 THB (0.95 – 2.55 USD) depending on the size of the bag. A whole cooked chicken is 130 THB (4.10 USD). Ground pork is about 160 THB (5.10 USD) per kilogram and ground beef is a bit pricey at around 210 THB (6.65 USD) per kilogram. If you can’t live without some foreign brand groceries, then expect to pay at bare minimum what you would pay in that item’s home region, but the price will usually be quite a bit higher in Thailand. Fortunately, there are often Thai brands that make foreign foods such as peanut butter and even cheeses (any imported cheeses are quite expensive).

The most popular way to get around Bangkok is on the skytrain (BTS) or subway (MRT). A ride will cost an average of about 30 THB (0.95 USD). Buses charge around 11 THB (0.35 USD) a trip and are convenient if traffic isn’t bad. River and canal boats run at about 15 THB (0.50 USD) a ride. All are average prices and cost more or less depending on the distance.

To have someone drive you in a metered taxi, tuk tuk or on a motorbike, the cost is quite negligible. Metered taxis start at 35 THB (1.10 USD) and charge 5 – 6 THB (0.15 – 0.20 USD) every kilometer. Tuk tuks should cost about the same, but the drivers usually try to overcharge. Motorbike taxis should be slightly less than a metered taxi at about 20 THB (0.65 USD) a kilometer.

Few non-locals own cars but a number of brave or foolish (depending on how one looks at it) foreigners drive motorbikes. A used motorbike can be purchased for as low as 10,000 THB (315 USD) or a new one for 30,000 – 60,000 THB (950 – 1,900 USD). This mode of transportation might feel safer than being driven by an intoxicated motorbike taxi driver, but when a person owns a motorbike they generally drive it on a daily basis making the likelihood that said person will become another statistic under a bus all the more possible.

Entertainment and Relaxation in Bangkok 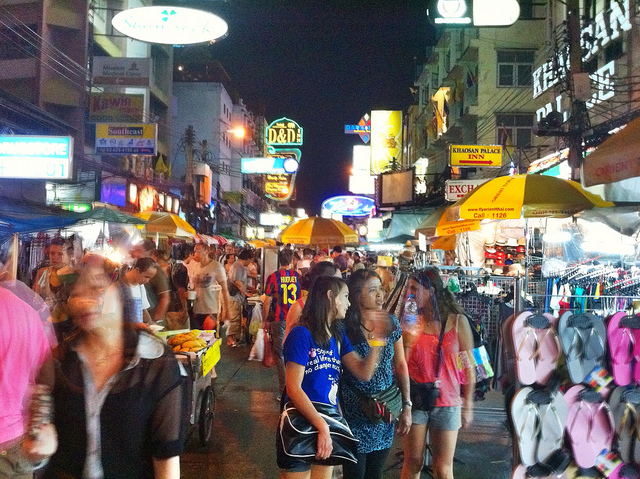 Khao San Road is something to behold, By: MCKay Savage

Bangkok is a hub for medical tourism giving the city world class medical facilities. Prices at Thai public hospitals and local clinics are very low. Basic ailments such as colds, flu, or food poisoning will run up a tab of only 400 THB (13 USD) or less for the consultation and medicine. Private for-profit hospitals will charge at least 700 THB (22 USD) for just a consultation, but private non-profit hospitals will charge about 400 THB (13 USD) for a consultation. Major surgeries are also cheap. For instance, a leading for-profit heart hospital will perform bypass surgery for as low as 400,000 THB (12,650 USD). A number of hospitals have ISO and American certification allowing for foreign insurance coverage. Dentists charge anywhere from 700 – 1,500 THB (22 – 47 USD) for a general checkup and cleaning.

Unless earning more than 150,000 THB (4,745 USD) residents are income tax except, then up to 500,000 THB (15,815 USD) is only a 10% tax rate. But, most foreigners do not account for the cost of maintaining a visa. If a foreigner has a visa and work permit, it is likely that his/her place of employment has paid for these. However, many foreigners live in Thailand vicariously and technically illegally on any visa they can acquire (usually a tourist or education visa). The cost to maintain this is 2,000 – 4,000 THB (63 – 125 USD) a month. 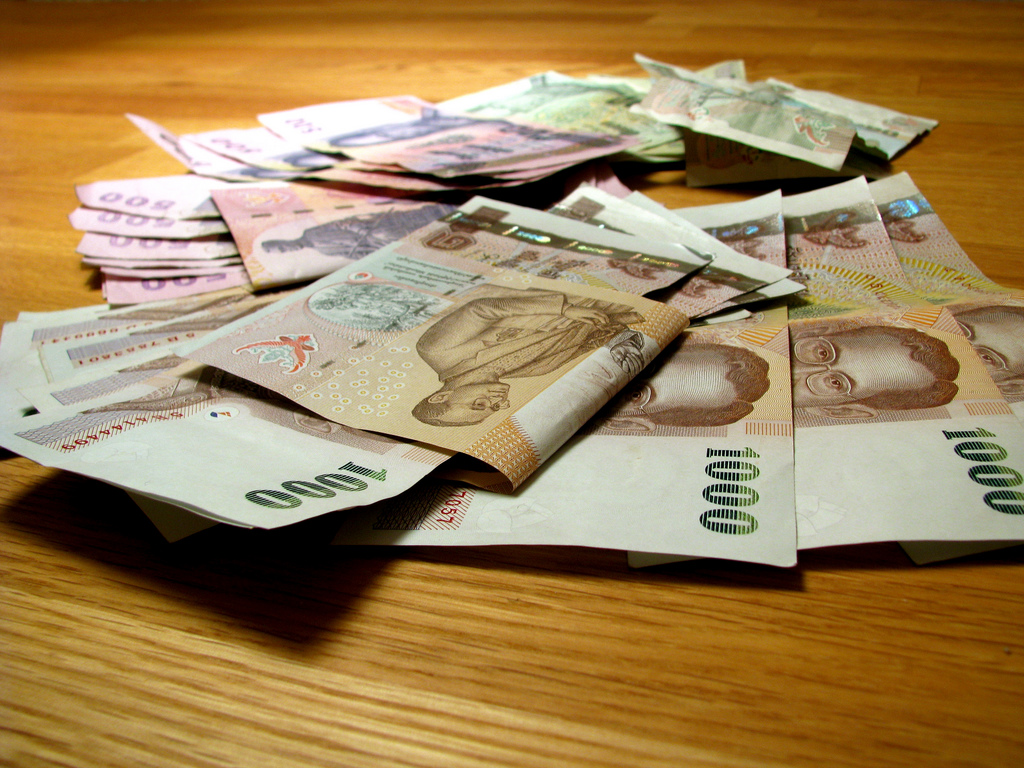 It is possible to survive off 10,000 THB (315 USD) in Bangkok, but you are just surviving and not thriving. Forget about going out and even hosting in might be a problem, since your place is one small room. It’s only Thai street food for you, and for more than one reason you’ll have to learn to tolerate cold showers. If you’re spending 25,000 THB (790 USD) a month, you’re living in a simple place but going out once a week and taking an occasional trip to the beach. 35,000 THB (1,110 USD) is usually starting pay for an English teacher and if you watch your money and do side work you should be able to fly home to visit family once a year. Above 45,000 THB (1,425 USD), you’ve probably got a small saving plan or blow your money on booze and treat yourself to some foreign restaurants a few times a month. By the time you hit 70,000 THB (2,215 USD) for one person, you’re having a great time in Bangkok and flying down to southern Thailand and other destinations in the region on a regular basis, but you’ll still avoid Singapore and Hong Kong. Anything above this and you can raise a family in Thailand and probably afford to put one kid into an international school, but just barely. However, to have a couple of kids in an international school and have a decent sized place to live, you will need at least 200,000 THB (6,325 USD) a month.

In the end, Bangkok caters to nearly every price range and it’s really up to individual wants to determine how much a person needs to live happily in the city. One can live kii neow (dirt cheap) or hiso (high society). It’s all up to you.

All rates are calculated from THB to USD using the average monthly exchange rate (0.0316268) for June 2012 , then rounded to the nearest 5 cents, 1 dollar or 5 dollars. Keep in mind that the rate for buying baht is about 2% less.