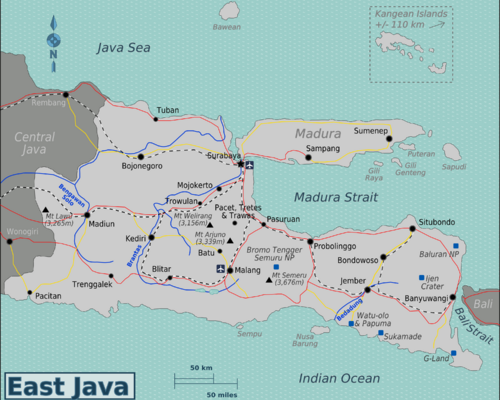 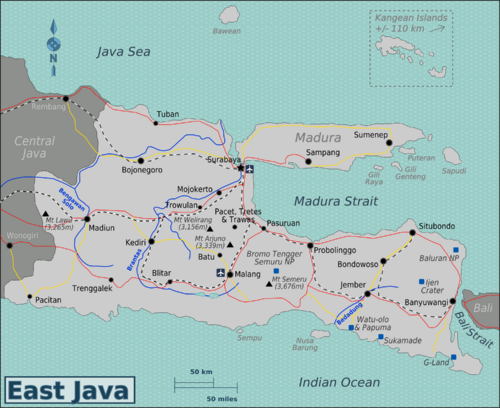 East Java (Java Timur in Bahasa Indonesia) is the easternmost part of the island of Java. it includes the island of Madura and some other smaller islands in the region. The capital of East Java is Surabaya,  the second largest city in Indonesia and a major industrial center and port. East Java is the second most populated province in Indonesia, after West Java. The population consists of Javanese, Madurese and a sizeable Chinese community.

Most visitors to East Java only see the Bromo volcano, the star attraction in the region, located around 70 kilometers from Surabaya. The Bromo-Tengger-Semeru National Park it sits in is a popular hiking destination. Typically, people will stay near the Bromo overnight and hike or ride on horseback to the volcano at sunrise. While its views are indeed spectacular, East Java has a lot more to offer.

The Ijen Crater (Kawah Ijen) in the Ijen Plateau near Banyuwangi and Bondowoso is a less well known but in its own way equally spectacular area of volcanic activity. The crater can be approached from Bondowoso in the west or Banyuwangi in the east. The Bondowoso route is recommended as the road is relatively better (although that is not saying much) and the 90 min foot climb much easier. When you arrive the colour of the water in the lake is scarcely believable being an extraordinary vivid aqua blue. 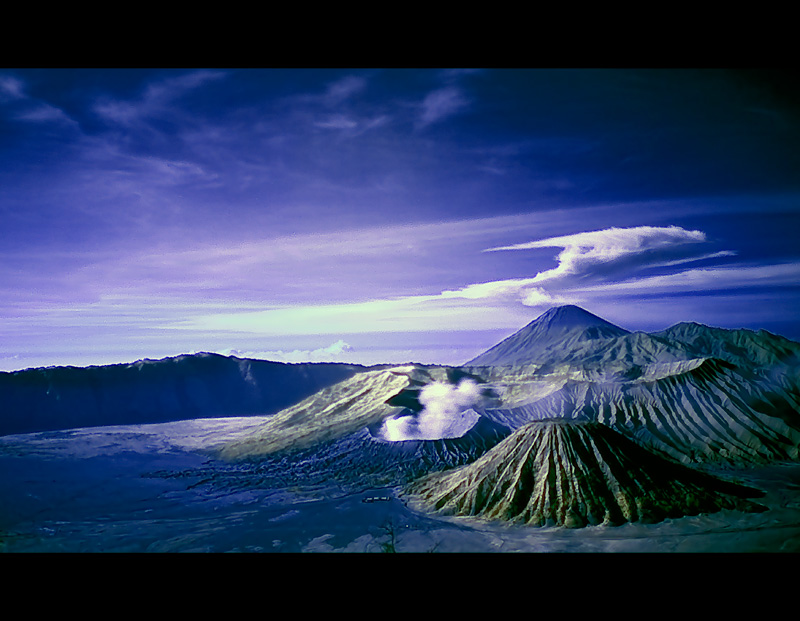 The two large southern national parks of Alas Purwo and Meru Betiri are remote and sparsely populated and represent the nearest thing to a wilderness experience that you will find on Java. In the north-east, Baluran National Park recalls African Savannah plains.

The island of Madura sits off the north eastern coast of the region and is as off-the-beaten-track as you can get in this part of Indonesia. That is slowly changing as the road bridge linking Surabaya to Madura opened in mid-2009. Madura is especially famed for the bull races (Kerapan/Karapan Sapi) that take place each year. Madura put itself on the national menu with two very popular dishes: Soto Madura (a spicy vegetable broth with glass noodles and chicken or beef) and Sate Madura (thinly skewered mutton or chicken with a black soy sauce or a peanut sauce). 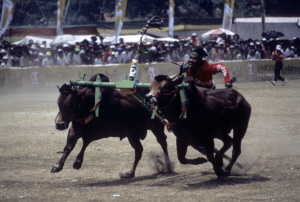 Bull races on Madura, By: FatPassportInc.

Altough East Java isn’t known as a beach destination, it spurs beautiful fine sand beaches on both the north and the southside. Sukamade is a turtle conservation beach and around Trenggalek you will find beautiful and quiet white sand beaches. The Baluran National Park is a large forest and coastal park, with relatively easy access to and from Bali. For those looking for a little more action, G-Land near Banyuwangi is a world class surfing destination.

The overcrowded, polluted city of Surabaya rarely makes it on any visitor’s must see list. As a port city, Surabaya is a frenetic hubub of international and sometimes slightly shady activity. The notorious red light district Dolly is a sightseeing attraction of a different kind.

In comparison to Surabaya, Malang is a breath of fresh air. The city was a seat of major power in Java’s Hindu past and the Dutch took a great liking to its relatively cool, fresh climate in the colonial period. Modern day Malang, although significantly urbanised, has retained much of its historical character and a few days looking around this lovely city and visiting nearby places of interest, will be time well spent. 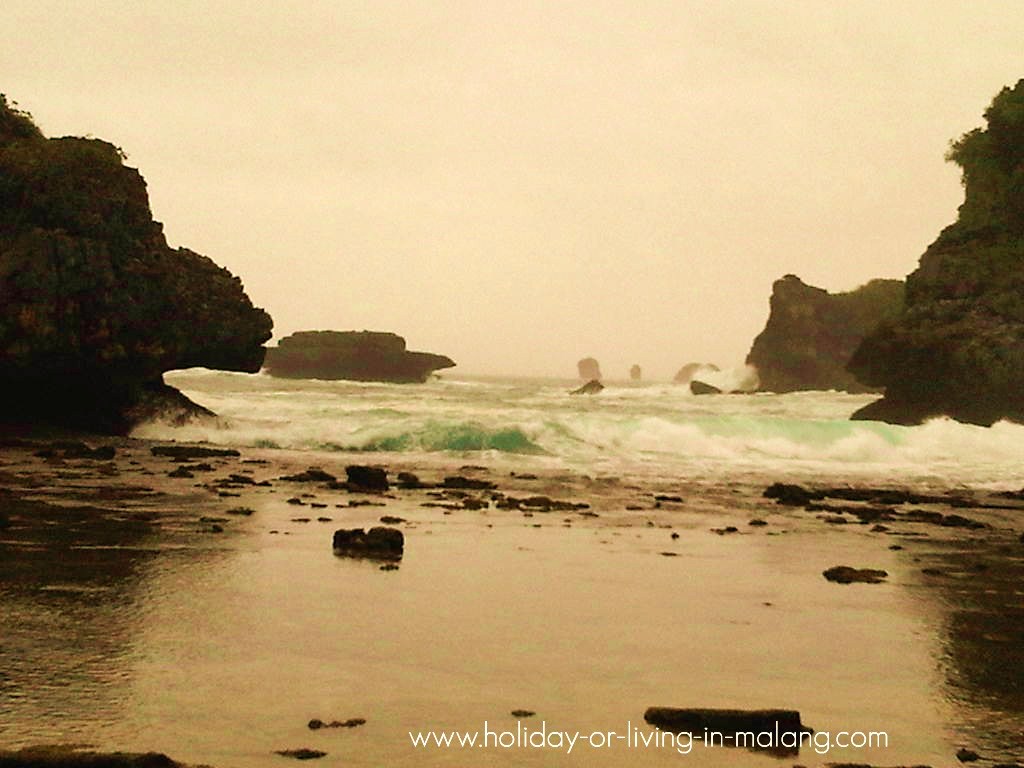 In the city centre a great first stop is Ijen Boulevard. This is a quite beautiful street lined with tropical trees against a backdrop of old colonial structures. The street houses a number of interesting buildings including the Brawijaya Army Museum, Immanual Catholic Church and the city library. Nearby Jalan Tugu is home of the city hall (Balai Kota Malang), the Tugu Monument, Aloon-Aloon Bunder (park) and the Tugu Hotel. The latter houses a magnificent collection of Javanese antiques and serves lunch or tea.

Around Malang you can find some surprisingly beautiful beaches and an offshore island called Pulau Simpu.