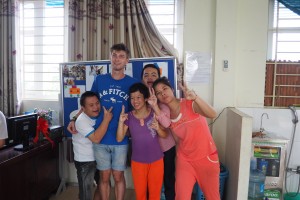 This article responds an earlier article about the inclusion of people with disabilities in Hanoi. Previous article emphasized the (international) governmental events concerning people with disabilities in Vietnam. Also cultural aspects were given when visible. This weeks’ article focusses on Friendship Village, a representative special school for disabled children in Hanoi.

Monday, 6am. An introductory tune starts to play for about one minute. It initiates some messages at the megaphones on the street. Every cities district broadcasts information using these loudspeakers. Soon millions of Hanoi inhabitants start driving. It’s time for breakfast and a thrilling cycling tour to another district. As an intern I prepare teaching with Mrs. Loan, who is already started preparing cooking class.

At 8am the gatekeeper of Friendship Village rings a car rim with a piece of metal, alerting children to enter the school building, as well as some just born puppies dancing around it. Some children are dropped off by their parents. 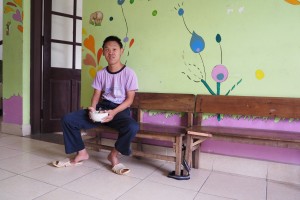 120 children live at the Friendship Village for two to five years, depending on their personal possibilities and wishes. Here they receive education, healthcare and shelter. Approximately 60 veterans also continuously live at Friendship Village, though they only stay for a shorter period of time of one to two months. They receive healthcare and shelter, as well as the joy of being together with other Vietnam War veterans. They also love being together with the children and sometimes visit a class or take a walk with the children. Both suffer from the side effects of the war.
At the very beginning, the village only cared for 15 people (6 veterans and 9 children). Nowadays, the village takes care of over 600 children and 6000 veterans. The Vietnam Friendship Village is located at a previous paddy field of nearly three hectares in the Hoài Đức district of Hanoi. People from all over the world came to build this city during the many years of construction and upgrading. It is the result of a cooperation between the Vietnam War Association and like-minded organization from the United States, Germany, France, Japan, Canada and England. Friendship Village officially opened its doors on March 18th 1998.

Friendship Village supplies services and facilities to people coming from Quan Binh province (middle Vietnam) to Ha Cong province (north Vietnam), approximately 30 provinces in total.
Parents can apply their child by contacting their local Veterans Association of Vietnam. This local organization then investigates the possibilities of being educated at Friendship Village by contacting the national office. It is an important condition that the child’s disability is relatable to the war or its side-effects.

The sight includes several houses with dormitories, a school building, an administrative building, as well as a fully-functioning doctor’s practice and physiotherapist therapy room. They recently added a swimming pool to provide movement therapy. Clients potentially receive prosthesis and walking frames which boosts their mobility. Gardens provide life skill classes fresh vegetables, fruits and even herbs which can be used to make medicines. 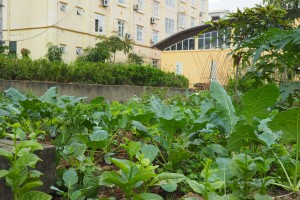 During the lunch break (which lasts 3,5 hours) children play around the pond, threes and playground. Regular festivities are being held at the stage in front of the soccer pitch. Friendship Village director Đinh van Tuyến says it is important to organize activities to blend people with and without disabilities. NGO’s and regular high schools often cooperate with Friendship Village to organize sports events, music and entertainment. Sometimes even yoga or football groups. Đinh van Tuyến also states that people with disabilities should have a voice at meetings in memory of the Vietnam War. Just recently one of my students talked about her disability at a congress for example. She told visitors what it’s like to live with the side-effects of dioxins in Agent Orange bombs.

The main goal of fulfilling a two or three year training at the commune is to raise the children’s independency and rehabilitate them into society. Children receive vocational training, writing, math and life skill lessons such as washing, brushing teeth, gardening cooking.
Children pass five classes before leaving the Friendship Village, starting Class 1. During my internship I noticed talented kids could enter vocational training classes such as making fake flowers, embroidery art, sewing bags and wallets or upgrading their IT-skills. 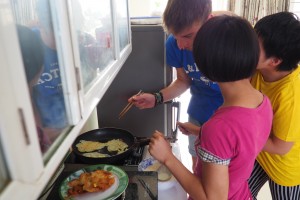 My class was being called the life skill class and it’s the last step before heading back into society. Every day begun with cooking lessons, eating and doing the dishes. After a lunch break and some sleep, children practice writing, reading, and counting. We garden and harvest one afternoon per week and the remaining afternoons basic life skill lessons were being taught such as washing hair and brushing teeth.

Some children graduate in two years (this is the guideline), while other (more severe disabled children) need three or five years to develop their skills before returning home. After finishing the education, children and their families can still use Friendship Village contacts, services and knowledge (doctors, physiotherapists and psychologists).
Children sacrifice living with their families for a couple of years, in order to learn abilities and skills to live their live (more) independent.

Placing disabled children at education institutes as Friendship Village for two or three years may seem like the opposite of inclusion. But considering Vietnam is a developing country this schooling system is an acceptable compromise. The mainstream schooling system simply isn’t prepared or able to educate disabled children and parents experience a lack of facilities helping them to take care of their children their selves. 52% of Vietnams’ children with disabilities do not have access to education at all and are often illiterate (33.9%) (MOLISA and UNICEF, 2009)

Friendship Village director Đinh van Tuyến encourages disabled children to be involved in social activities: ‘’I encourage them to overcome their difficulties to become a good citizen’’. He also mentions Vietnam has many successfully cases of handicapped people integrating into society when teached properly . ‘’Disabled people do really well at IT- and engineer work, even better than people without a disability’’. It was an interesting interview as Mr. Đinh calmly responds to my questions and shares his ambitions at a realistic way. He hopes he can create more vocational classes that fit the students interests but therefore he relies at donations, just like most similar organizations in Vietnam.