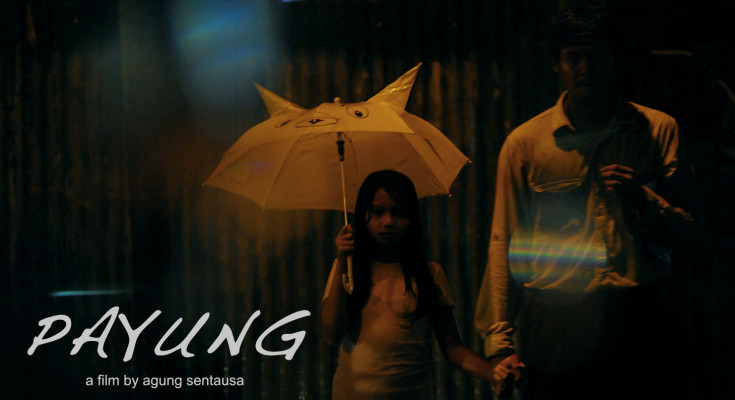 Belkibolang (short for ‘Belok kiri boleh langsung’ [Indonesian for “turn left directly”]) is an omnibus of nine short films put together by prolific Indonesian young filmmakers. Besides the spatial and temporal setting—Jakarta at night time and a slice of life of its inhabitants—perhaps there is no conspicuous thread that connects each film to the other, at least not in a straightforward manner. But this is not to say that they are not coherently woven. Despite the diversity of the subject matter, these films seem to facilitate a fresh conversation among the filmmakers themselves and between them and the global festival audience.

If you happen to be in the Netherlands this month you are in luck. The World Cinema Amsterdam Festival shows Belkibolang on Sunday 14 August 15.00 and 16 August, 17.30 at the Rialto. Afterwards the festival will go on tour and Belkibolang will be screened in Den Haag (22 August), Maastricht (4 September) and Groningen (10 September).

For the most part, I take Belkibolang to be a crucial sign that art cinema and independent filmmaking have grown full force in the contemporary climate of Indonesian movie making. Of course, art cinema as a mode of film practice and autonomy in approaching film independently are not at all current phenomenon in Indonesian cinema. Garin Nugroho, an international film festival regular, has been involved in crafting contemplative arty films since two decades ago, and the grass-roots independent film movement has churned out some of the critical Indonesian films since the late 1990s. But Belkibolang represents a further development of present day Indonesian cineasts who are consciously reflecting upon film history and their sense of placement within the continuum. Granted, these filmmakers experiment with loose storytelling structure, ambiguous ending, stylistic embellishment and other strategies that art cinema is known for. But there is something about these short films that is just too eclectic to be put under one umbrella. So, here are some of the highlights.

“Chit chat” by Ifa Isfansyah is a surprising treat as it plays around with causality and temporal reordering making you wonder if you have actually watched the film in reverse without any realization whatsoever. Set in a terrace between two adjacent houses, it involves a late night conversation between Omen, a cook, and Nuri, his pregnant neighbor. Their rumination on man-women relationships, decisions in life and what it means to be a perfect mother is handled in an arresting circular dialogue of which you can’t guess where it starts and where it ends. The film takes us to the spontaneity of social interaction in urban life in Jakarta as a coping mechanism to get through day-by-day reality. Nuri is portrayed as an ambivalent mother who wants the best for her yet-to-be born child but carelessly smokes cigarettes away. Overall, the film brings out a tense tenor that captures what Jakarta is all about.

Tumpal Tampubolon’s “Mamalia” is an absurdist realist comedy, without any intention of being comedic from the outset, grabbing viewers’ attention with its tight plotting and outlandish narrative implication. Wati, a gender ambiguous passenger of an ojek (motorcycle taxi) driver Maman, is on the search for an address in Jakarta. They are riding on the ‘bebek’ motorcycle for hours until at one point they have to stop because something gets into Wati’s eyes. This is where the turning point begins, and the exhilarating twist unfolds in an unpretentious fashion. For the sake of not spoiling the plot, I will stop here by saying that “Mamalia” will take you by surprise and is sure to get some laughs.

“Ella” by Wisnu Surya Pratama deals with the subject of a female sex worker in Jakarta and her uncomplicated relation with her family back home. Uncomplicated, because her parents do not have the slightest idea that their daughter works full time to gratify men’s sexual needs for money. What’s interesting is that it takes place on the side of the street with the stall of a grilled chicken and duck selling vendor as the setting. Precisely on the last evening of Ramadhan, Ella forces herself to work as much as possible, even for a 50.000 Rupiah fellatio, in order to save enough money to celebrate the  big day of Idul Fitri at home, somewhere in Surabaya (East Java). To add an extra layer to the subtlety, Surya, the vendor’s owner, acts as a liaison between Ella’s life as a prostitute and her being a thoughtful daughter. The strongest element from this piece stems from the fact that sexuality is tackled in an almost banal manner and indirect way.

I can’t ask for a better closing than “Full Moon”. Taxi driver Bobi is cashing in on the New Year’s eve as Jakartans are out and about to celebrate the transition from the old calendar to the new one. A lady in her 30s gets in, but she’s surprised to find another passenger sitting at the front seat. Wait, that’s actually Bobi’s wife hopping along. The lady asks if it’s okay that she took the cab, Bobi responds apologetically that he should be the one to feel bad. But what is the wife doing there anyway? Along the way Bobi picks up more passengers. One immediately declines as soon as he sees the wife, while the others do not even care to notice. But what is the wife doing there anyway? At the end of the day, all will be revealed, but if the wife ever picks up on it?

Directed by Sidi Saleh, “Full Moon” encapsulates what I find arresting about art cinema [but not all art cinema]: indirectness, deforming realism, no apologies, unresolved ending, and aesthetic layering of images and sounds. Certainly this is a reflective take on suppressed free will but it does it in a non pedagogical way. This piece is one of the few that I would like to see unfold on the feature length version, next to “Mamalia” that is. Because it keeps you wanting more and you get curious of what these talented filmmakers can do to translate the plurality of Jakarta’s faces!

Overall, Belkibolang gives us a rich experience into the lives of Jakartans. Some even say that this is Indonesian filmmakers’ response to New York I Love You (2009) or Paris Je T’aime (2006). Nevertheless, perhaps the comparison is too narrow and I stand by the film as a testament of creative laboratory as opposed to a statement of dedication to a city that hardly loves its dwellers.

Belkibolang consists of (in a sequential order):

I. Umbrella by Agung Sentausa