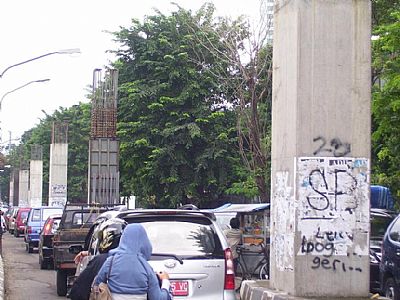 The present 'pillars of the community' in Jakarta

Jakarta had a plan to build a monorail and abandoned it due to legal and financial difficulties. The pillars were left standing as a testament to big ideas, with little thinking ahead. But, in the near future, moss-covered concrete pillars at the left and right side of various streets in Jakarta will bother you no more.

Jakarta’s government is now exposing us to a new dream; building on those pillars and making them part of the long awaited monorail or MRT system. Instead of getting irritated by those looming pillars overshadowing your struggle to inch your way forward in traffic, you will then relax and enjoy Jakarta from above, in a airconditioned train carriage that zips through the concrete jungle like a well trained monkey. 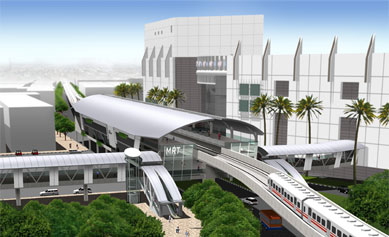 The planning promises us more. Jakarta is not the only city to get monorailed.

Some other cities simultaneously expressed their future plans; Tangerang Selatan, Bandung and even Makassar in South Celebes and Borneo have plans for monorails. The Jakarta City administration told the press at the end of last month that the project will run in two phases and cost Rp. 15 billion ($ 1,6 billion). The first phase, which would start later this year will be completed by 2016. The second phase completed by 2018. The city administration is waiting for the Japan International Cooperation Agency (JICA) to approve the basic engineering design of the MRT. JICA has agreed to finance 85 percent of the MRT through a $1.3 billion loan. The remainder will be covered by the central government and the Jakarta Administration.

The MRT project in Jakarta: Will plans become reality?

Developing Jakarta is has a great effect on its buffer cities; Tangerang Selatan and Bandung. The new project should be an integrated system of transportation across cities. Several days ago, city government officials mentioned some interested company names, including foreign companies that are on their hand.

Getting the Green Light from China

Getting the green light from China, Bandung plans to build both a mass rapid transit (MRT) and a light rail transit (LRT). Some forecasts show that the project is cheaper than a subway and would cost some Rp 1,2 trillion ($ 1, 35 billion). Prof. Zhang Ding Xian, a MRT and LRT expert of Tongji University, China said, the Chinese government has now $ 800 million ready of the loan for the Bandung municipality.

Meanwhile, by appointing the Kalla Group as the main producer, Makassar in the South of Celebes determines to have an MRT in 2014.  “God willing, if all stages run smooth, the monorail will operate in Makasar in 2014,” Makasar major, Ilham Arief Sirajuddin told the press after detailing his idea on the Makassar monorail developments last Thurday, July 21.

The Kalla Group is a Makassar based conglomerate once presided by Muhammad Jusup Kalla, Indonesia’s former vice president. Ilham believes the monorail possibly would be the best solution in overcoming traffic jams and congestion in big cities like Makassar. “Besides cheap, monorails are a very efficient system. Some developed countries like Japan and several European countries also use it,”  Ilham said.

City Design based on Economic Development

Reality as it stands, By: Wisnu Leonardus

Building mass transportation is now critical to Jakarta since it relates to a city design based on the idea of economic development. A 2004 JICA study shows over 1,000 vehicles get onto the streets of Jakarta every day. They contribute to 80 percent of the air pollution. The traffic situation costs Jakarta and its inhabitants a lot. In 2005, the Pelangi Foundation cited the city loses at least Rp 12,8 trilion or almost $ 1,5 billion a year on time spended standing in traffic, fuel and people’s health spendings.

To read more about the plans go to the website of MRT Jakarta.