Balinese Food: Some Balinese Culinary Treats you have to Try

Visiting Bali is simply not complete if you don’t explore the Balinese cuisine. The Indonesian stereotype is that Balinese are too busy performing the many daily Hinduistic rituals and traditions to cook. Actually the opposite is true. Food often takes the center stage during ceremonies and celebrations.

Balinese food is known for its spiciness and enthusiastic use of bold flavors. The basa gede is an essential Balinese spice paste that consists of different spices for different dishes. It always incorporates sweet, salty, sour and spicy ingredients. Just like everything else in Bali, it’s all about the balance and harmony between these flavors.

These are some essential Balinese dishes and tips on where to enjoy them:

Lawar Bali is a typical Balinese dish. It comes in a white and a red variant. Both are consist of vegetables, but the white lawar can be vegetarian whereas the red lawar is made with fresh pork blood. There is a special trick in cooking red lawar to make sure that the blood does not smell bad, by using lemongrass and lime extract that is mixed in with the blood and the vegetables. Lawar is usually a side dish which is presented together with main courses like ayam betutu (steamed chicken) or babi guling (roasted suckling pig).

Lawar can be found in many restaurants, especially the local road side eateries. In Kuta, a restaurant named Warung Enak, located in Mataram Street just a block after Legian street, served up a delicious lawar with ayam betutu and side dishes like sambal matah, boiled egg, tum, and jukut.

Sambal matah is very hot. It is made of chopped chili, red onion and lemongrass and is seasoned with salt. While tum is a blend of grated coconut, chicken, and seasoning wrapped in banana leaves. Jukut resembles a vegetable soup. Any kind of vegetable can be used to make jukut, but it’s most commonly made of young jackfruit.

Betutu is basically a mix of spices that is used to cook chicken or duck, the so called bumbu jangkep that includes garlic, turmeric, shallots, ginger, lemongrass, chilies, bay leaves and kaffir lime leaves. The duck is spice-rubbed duck slow-cooked in banana leaves. Like almost any meat in a banana leaf, the best bebek betutu is beautifully tender and the spices pronounced. You can also opt for steamed chicken. There are several styles of doing betutu:

Your best bet at finding bebek betutu or ayam betutu is Ubud. Try Kedewatan street for plenty of options. In Kuta, one of the Ayam Betutu Gilimanuk branches will also not disappoint. It takes over 24 hours to cook any betutu, so you are often asked to order in advance! 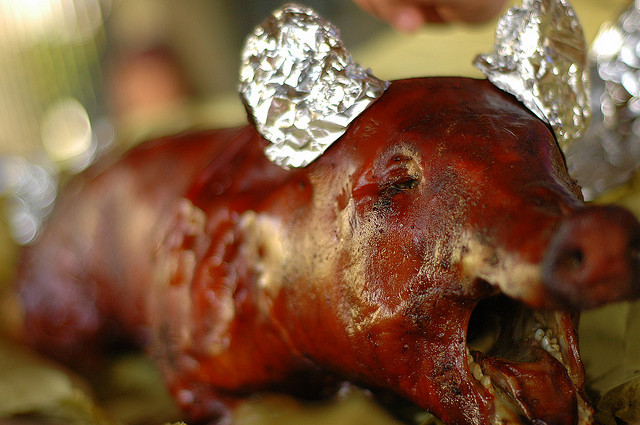 In downtown Denpasar, Warung Chandra serves up another Bali specialty: Babi Guling. Guling refers to the way of cooking, a whole pig(let) is grilled above a fire. After the pig is cleaned, seasoned cassava leaves are put inside the stomach before grilling. The bowels are filled with pork to make sausages. The skin is grilled until crunchy like a cracker.

The roasted pork is served with satay lilit and sambel matah. Satay lilit is made of skewered meat and grated coconut. A small bowl of pork soup with light seasoning completes the feast. You will find babi guling on any festive occasion, but if you can’t wait, try Ibu Oka’s in Ubud, Pak Malen’s in Seminyak or Warung Babi Guling in Sanur. 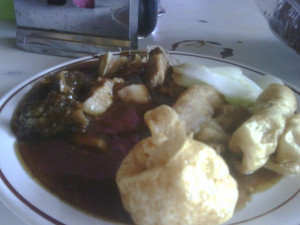 Siobak in Singaraja, By: Rollan Buddi

Traveling north to Lovina near Singaraja, another pork dish awaits. It is called Siobak. This dish is actually Chinese in origin but with a Balinese spin on it. Singaraja region has the largest Chinese community on Bali, so head over to the north if you want to try this dish.

Siobak consists of roasted pork belly with a delicious lumpy black sauce. The sauce is what makes this dish, with its wonderful flavor of sweet soya with cinnamon and lots of star anise. Topped with chopped fresh green chili and cucumber pickles, this dish is irresistible. Try it at Sio Bak Cik Kelok in Surapati street in Singaraja.