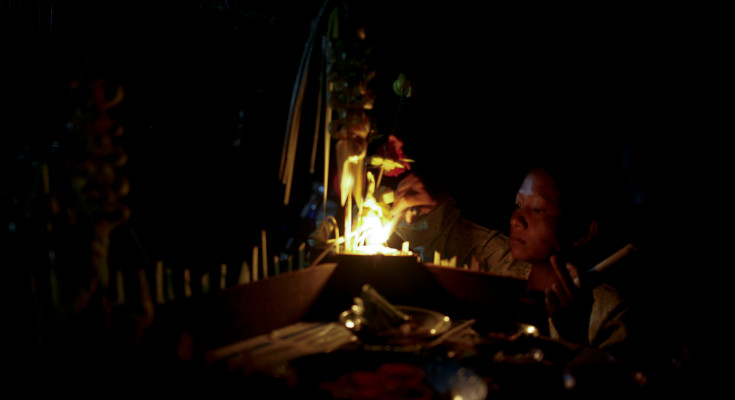 The Orang Asli of Malaysia are divided into 18 sub-ethnic groups according to customs and languages.With a population around 1,400, Mah Meri is concentrated around Kampung Sungai Bumbun on Pulau Carey. Mah Meri, meaning forest people, communicate in Mon-Khmer and live in wooden houses. They are skillful wood-carvers.

Once a year, the Mah Meri tribe of Selangor celebrates Ari Moyang (Ancestor’s Day), a celebration about giving thanks to the spirits for all the good things that had been bestowed upon the villagers. It is celebrated by offering prayers and blessings to their ancestors especially to Muyang Gadeng, a female spirit guardian. Mah Meri people are skillful with craft work, their weaving skills are seen showcased in the neatly woven skirts, headbands and sashes worn during the celebration.Watch this beautiful video made by Ebrahim Harris, documenting Ari Moyang:

The Mah Meri tribe offer prayers and blessings in honour of their ancestors. The tribe will gather at the Spirit Hut (Rumah Muyang) commemorated for Muyang Gadeng, a female spirit guardian. Offerings are sent to her and other spirits around the area.

The community then gathers at the hut for special prayers. Rice powderbased solutions, mixed with flowers and leaves, are used to mark the foreheads and forearms during rituals.

It is celebrated over three days with a special dance called Mayin Jo-oh, to invite the ancestral spirits to join the festivity. The men would wear wooden masks and perform with movements to reflect their daily routine which includes fishing and farming, together with women performing dances with ritual song and music from bamboo, viola, drum, and brass gong.

To mark the celebrations, the tribe will gather at the spirit hut erected for Muyang Gadeng for the special prayers. After the prayers and as a form of blessings from the spirits, rice powder base solutions mixed with flower and leaves are used to mark the forehead and forearms of those present at the ceremony. With the purification done, a special dance called Mayin Joh commence inviting the ancestral spirits to join the festivity. The mayin jo’oh is believed to have originated during the beginning of time when an elder instructed a young man and a young woman to walk in opposite directions around a mountain.

The idea was to take the first person that one sets eyes on as a mate. A man embodying the spirit of Muyang Gadeng begins the dance. He holds an intense looking mask and thumped to the beat with hit feet as he moved in circles enacting the daily routine of the tribe. Then a group of women joined the dance with synchronized dance moves around a woven center piece. The celebration ends by noon when everyone gathers at the communal eating hut to share the bountiful food contributed by everyone. The Mah Meri sees the celebration of Hari Moyang as a yearly ritual to ward off disaste where the offerings are a way to appease the spirits and to ensure their continuous protection and as a way to remember their ancestors.