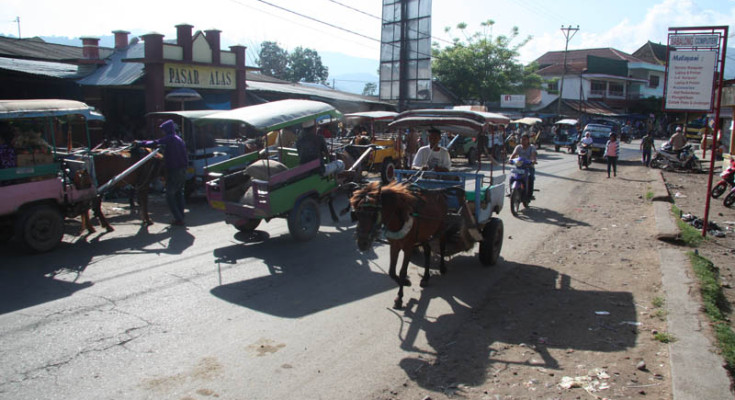 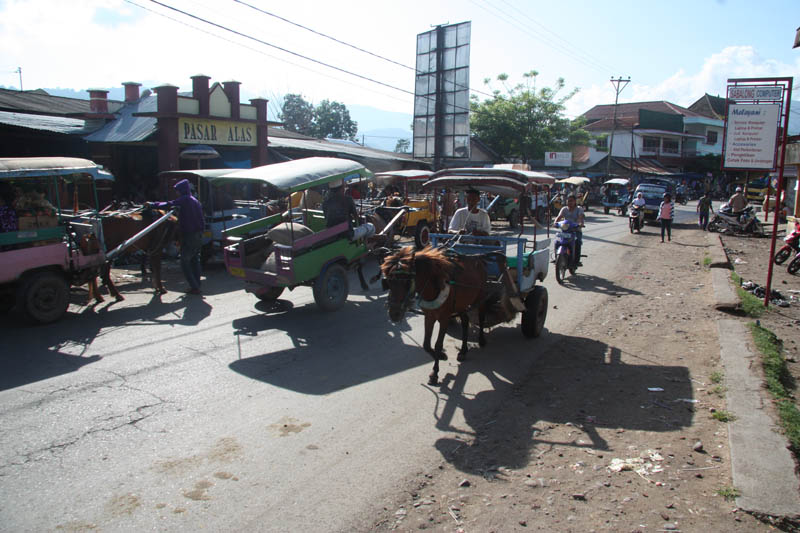 Apart from the legendary surf spots at Maluk and Lakey Peak, few see more of Sumbawa. Mostly, it is only observed from behind the window of a bus, speeding over the trans-island highway to the eastern side, just in time to catch the ferry to Flores. The odd traveler that spends more time to explore the island, finds himself lucky enough to enjoy it’s beauty in relative solitude. His sole companion might preferably be a motorbike.

Public transportation isn’t very good on Sumbawa, which is probably the main reason why most travelers never make it here. Thus, renting a motorbike seems a great way to explore Sumbawa. A sepeda motor is never hard to find anywhere in Indonesia. On Sumbawa, rental bikes tend to be more expensive (around 75.000 Rupiah per day), so if you’re on a tight budget, get one on Bali (around 35.000) or Lombok (usually around 50.000) and take it across with the ferry.

From Labuhan Lombok, regular ferries depart for Poto Tano (only 25.000 Rupiah), the little port town in West Sumbawa. From here, it’s easy to reach Sumbawa’s only highway. This 2 lane road runs all the way along the length of the island and is generally in great shape. Although there is hardly any traffic, beware of cows, dogs, cats, horses, chickens, goats and water buffaloes crossing the road ahead of you.

Just a few kilometers from PotoTano harbour you’ll find a junction. If you want to surf the world-famous breaks in Taliwang and Maluk, take a right here. Heading straight you’ll soon start following the enchantingly beautiful volcanic coastline. At low tide, locals collect clams near the shore and small groups of wild horses roam the beaches.

A pleasant stop on the way to Sumbawa Besar, the island’s capital, is the small town of Alas, about 25km from PotoTano. Around Pasar Alas, the Alas market, there a number of small hotels. Like most accommodation on Sumbawa, rooms are basic, only some have AC and mosquito nets. Room rates are reasonable (generally between 100.000 and 200.000 Rupiah per night) and typically include breakfast. Here you’ll also first encounter the infamous benhurs, horse and carts serving as taxi’s in en around urban areas.

From Alas, the city of Sumbawa Besar is another 70 kilometers east. Although there is no need to linger around here for too long, the small and bustling city center has a vast number of hotels and pleasant eateries. They are mostly situated along Jalan Hasanudin, making this the best place to go. The big mosque halfway the street guarantees an early wake-up call, so you’ll be ready to step on your motorbike before dawn. 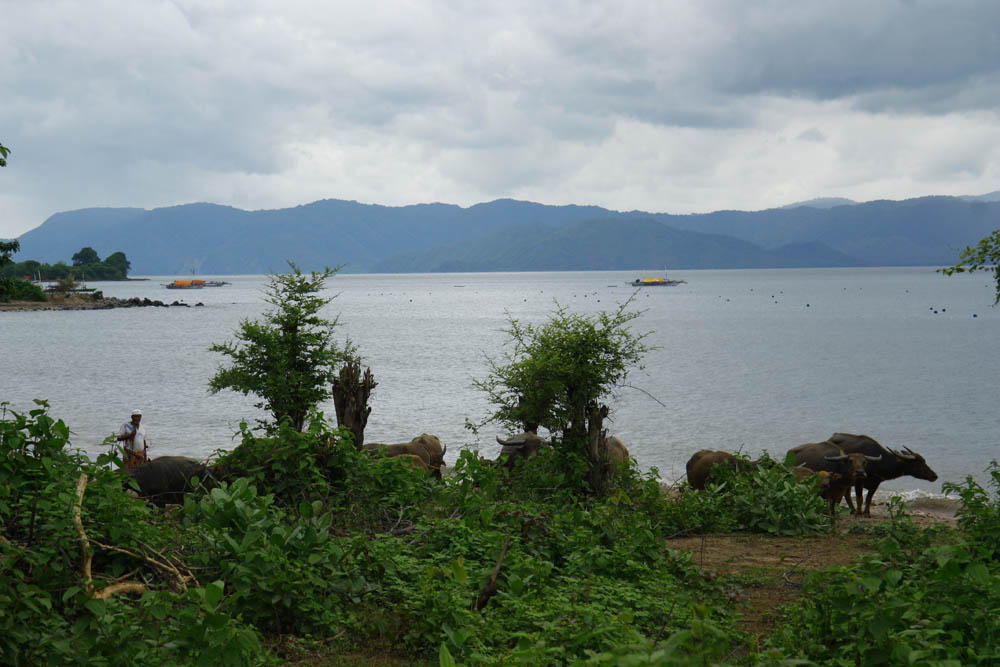 Waterbuffaloes near Huu, By Ed Caffin

Going further east, the coastline gradually changes shape. Western Semara Peninsula is studded with numerous isolated bays and secluded beaches. Near the city of Plampang you’ll then drive onto the vast strip of land that connects to western Bima Peninsula. The road here offers majestic views over Teluk Saleh bay on Mount Tambora. And going to the island, it passes small fishing villages, winding over the hills along the green rice terraces of Central Sumbawa.

Driving for about 120 kilometers, you’ll reach Dompu. From this fairly large provincial town a bumpy road goes south to world famed surfing spot Lakey Peak. Going straight, the road goes up and over a mountain, slowly cruising onto the eastern peninsula. This part of Sumbawa is home to distinct ethnic groups: the Bimanese and the Donggo. There are 2 kinds of Donggo : Donggo Ele, who live on the East side of Bima Bay, a major waterway creating a natural harbour, and the Donggo Ipa, who live on the west side.

It takes about half an hour to round Bima Bay, and reach Bimacity. Although it is busy and noisy, Bima has some interesting sites such as the Sultan Salahuddin mosque and the Sultan Salahuddin museum (former Bima Sultanate palace). If you happen to spend more time in here, check out one of the many rarely visited white-sand beaches in the area. Otherwise, consider the 1,5 hour drive to the port-town of Sape, on the way to neighboring Flores.

Spend some more time on Sumbawa 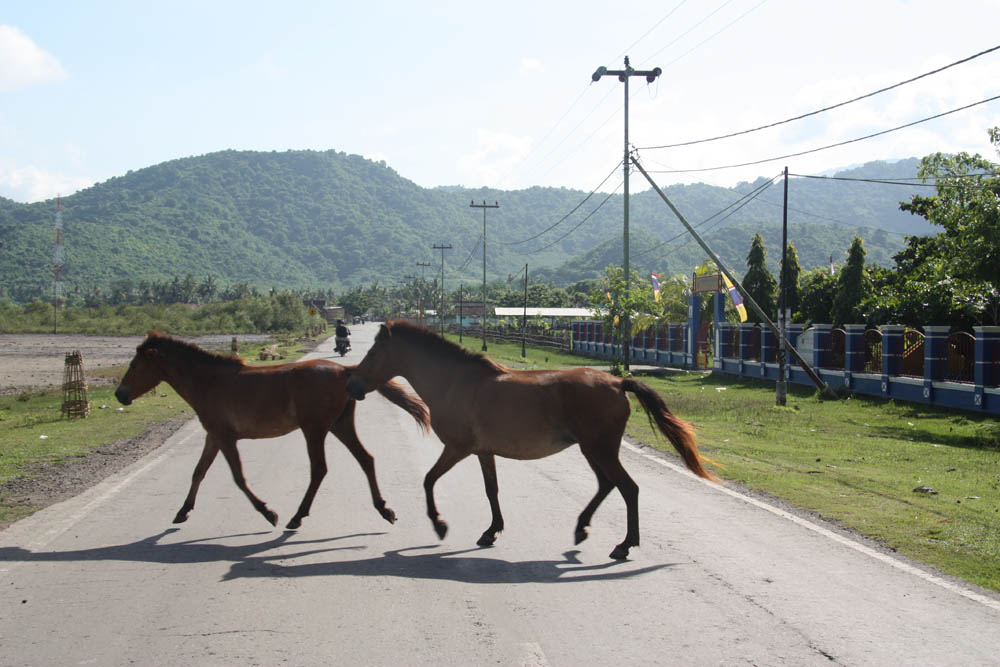 Wilde horses on the Road, By: Ed Caffin

Sumbawa is a big island. The more than 400 kilometer of highway runs the whole length of the island. That’s roughly 2 days of driving from East to West, but if you have enough time, there is no need to rush it. Renting a bike for at least week is more than worth it.

Cruising around on your motorbike, you’ll soon notice that the Sumbawese people are extremely helpful and friendly. You will be greeted with Hello mister! wherever you go. Sumbawa’s numerous hidden gems and friendly laidback atmosphere will make it a trip to remember.

4 thoughts on “Sumbawa by Motorbike”