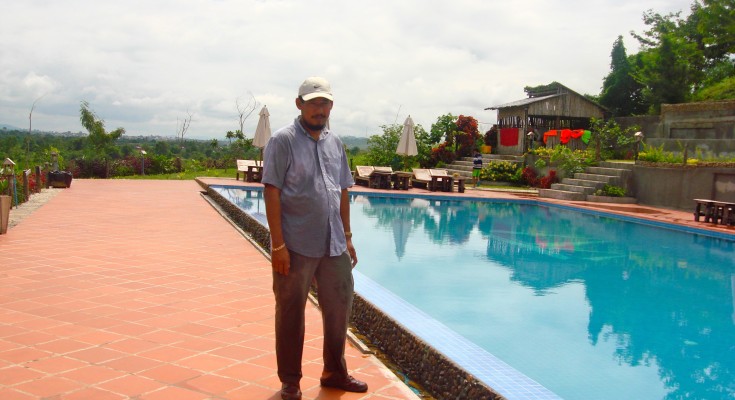 There is a peaceful softness that accompanies the sunrise in the Cardamom Mountains, Cambodia. The stillness and calm of the Memoria resort blanket you in relaxation and comfort. There is a palpable sense of joy in the air. This was not the case in Pailin, Cambodia just a few decades ago. The Khmer Rouge’s reign of terror ruled through fear and intimidation, unleashing cruel acts against its own people in the name of equality. 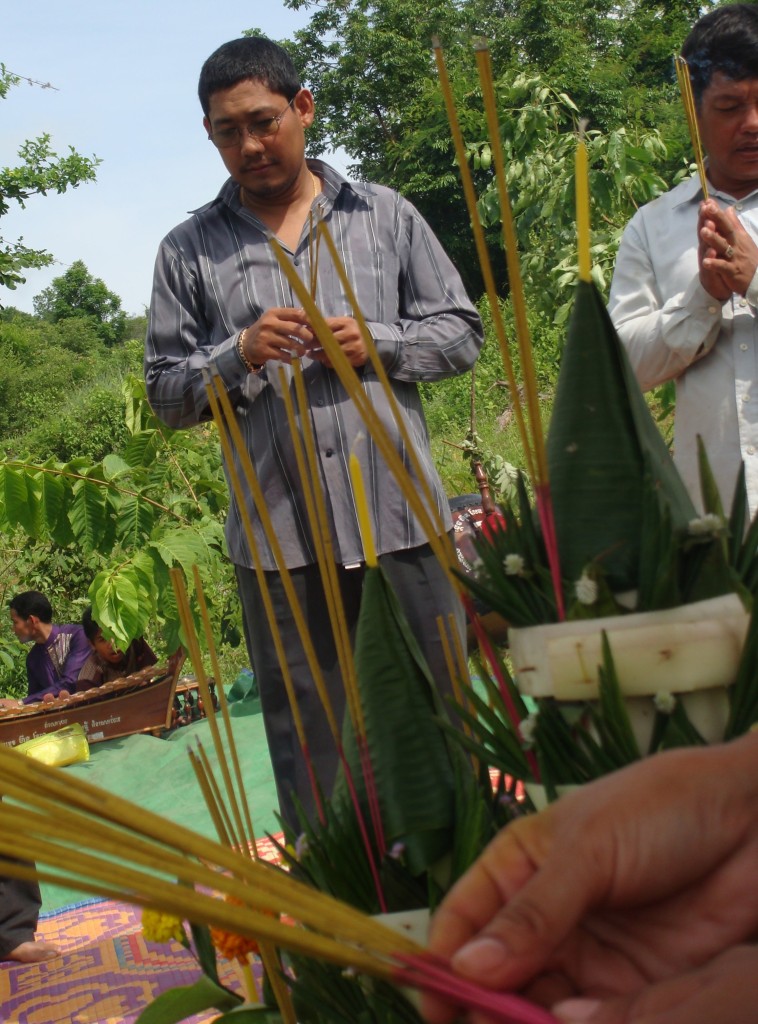 Vuth participating in a blessing of Memoria Palace & Hotel

Justice has a name; so does mercy.

Mr. Panhavuth Long, Vuth for short, dedicates much of his life to fight injustice in Cambodia. He and his entire family undertook a lifelong dream to restore peace and civility in once war torn Cambodia. Vuth spent three years clearing out more than 120 land mines from the area. The local authority and Cambodian government recently certified that all land mines are cleared from the area Vuth concentrated his efforts. It is on this site where he hopes to rebuild a prosperous future for Cambodians, their families, and welcome visitors from around the world.

I had the pleasure to spend time with Vuth and his family recently. A serious man, very intellectual and curious, extremely knowledgeable about history…impressively knowledgeable, as well as approachable, he does not know how to rest. I was invited to his resort, Memoria Palace and Resort, and experienced first hand what motivates this man.

A lifelong dream to create surroundings that are welcoming and peaceful, Vuth, has accomplished just that, and then some. Having an impressive career in law and specifically matters that deal with social justice, Vuth has dedicated much of his time, effort and energy to being a voice for those who do not have a voice. For the past several years he has played a role in the Khmer Rouge Tribunal cases. Through that work, revelations about the past bring difficult and confusing truths to light.  He developed an appreciation and very realistic understanding of the complexity of the cases, witnesses involved and the accused. What he began to realize was that establishing truth was complex and defined differently by different people.

Until late 1996 Pailin was a major Khmer Rouge stronghold and resource center. Before Khmer Rouge took over Cambodia, Pailin was well known as a land rich in gems, timbers and fruit tree orchards. During the French colonial days Pailin was home to a variety of coffee and rubber plantations set up by French protectorate government.

Khmer Rouge traded gemstones and timbers with Thailand for survival. Up until late 2007 Pailin was home to Pol Pot’s brother No. 2, Nuon Chea and brother No. 3, Ieng Sary before they were arrested, detained and charged by the UN backed Khmer Rouge Tribunal. Hundreds of bullet holes in the walls of the old buildings serve as a reminder of the Khmer Rouge’s war on Cambodia’s peace loving people.

Vuth on the site where Khmer Rouge cannons were once stationed

The Khmer Rouge military maintained a large ammunition depot on the site of what is now Memoria Palace & Resort. While we walked around the refreshingly simple beauty of the resort, I learn that the hilltop where Memoria’s swimming pool is located was once one of Khmer Rouge’s largest arsenal stations, including a large cache of arms and munition. I am taken by the intent of Vuth, and the implication of his design begins to come into focus. Mr. Vuth is not merely creating a place for gathering and vacations; in a very evocative manner he wants to restore a sense of hope that no war, no hate, no destruction can bury the Khmer spirit…

One of the unfortunate aftermaths after the Khmer Rouge was toppled, was that the stain of injustice and fear left a thick and persistent residue in Pailin. Once a vibrant and prosperous area home to over 1 million people, Pailin’s population has not seen numbers over 80,000 for years.

A strong perception among Cambodians is that Pailin is a place of sorrow, war and fear. It continues to be seen as a cruel area. In many ways justified considering what happened, especially since many former Khmer Rouge still live openly in the area and call Pailin home. Cambodians have had little desire to travel to Pailin for the simple fact that they know Khmer Rouge was heavily fortified in Pailin and the memories are too painful.

Through the years the local economy stagnated while many areas of Cambodia have experienced economic growth and development. Luckily Pailin’s economy is beginning to see light. Pailin’s grim past is slowly waning and more and more people remember the area as it used to be before the Khmer Rouge. “I want to see people have good lives here and a future with hope”, Vuth shared. He added that much of his motivation is to help give the people of Pailin the chance to prosper. In doing so he wants to create jobs and be a responsible participant in the local economy. “Over time the stain of the Khmer Rouge will fade”.

Over time the stain of the Khmer Rouge will fade, By: Tommy Boukhris

The name, Memoria, is Spanish for memory. The Logo was thoughtfully designed as well. The logo includes the “M”-shape, which stands for Memoria; a mountain-like shape represents the Cardamom Mountain range; man and woman; brother and sister; the special cut of the ruby, mined in Pailin; the roof style of the homes; strength and welfare; and the green represents nature and conservation.

It is the memory of yesteryear he wants to restore, and the future memories that are defined by peace, prosperity and simple human decency.  It are these that he believes are key elements for a brighter future.

Beautiful landscapes, a big open sky, the backdrop of the green and majestic Cardamom Mountains, lush vegetation and fruit tree orchards as far as the eye can see, welcoming locals, and a wonderful countryside. Cambodia lost precious people during a sad time, but never lost her spirit or hope.

For more info do check out the website of the Memoria Palace & Resort.