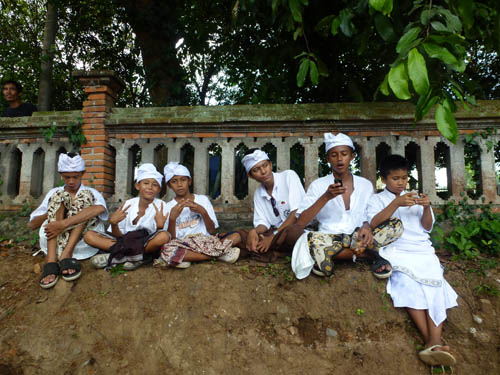 Sita’s stories: The Magic of the Mobile Phone

There is no doubt about it: the mobile phone has conquered the world. Even in remote and poor villages on the island of Bali, people have succumbed to its magic. The first group of buyers in the 1990s consisted of the wealthy, when the mobile phone was still expensive. But in the last couple of years, the young have come under the spell of the modern device. Teenagers came first, but today children of pre-school and primary school age walk around with a ‘hp’, short for hand phone, as well.

The seven-year-old son of my domestic help has a hp as well as his older sister. It is not a fancy one, equipped with the latest applications, but at least they can pride themselves in owning one and therefore do not have to feel inferior to their classmates. For their parents, the expense has been considerable. With a joint income of around 200 dollar a month, twenty dollars for a mobile phone was a financial sacrifice.

Many parents cannot counter the peer pressure that exercises a strong influence on their children. On top of that comes the constant nagging for prepaid telephone cards, which fortunately are not very expensive due to the relentless competition between the many providers operating in Indonesia. My teenage daughter, also sensitive to peer pressure, has already changed her hp I cannot remember how many times, avid to get the latest model. Her present one costs around 400 dollars. Because I did not agree spending so much, she paid half of the amount out of her own pocket. As a member of the successful debating club of her senior high school, she has ‘earned’ the money by taking part in debating contests. Not convenient for me, she changes numbers very fast as well, as the result of her diligent monitoring of the best offers for phone credit on the market.

The desperate need of people for phone credit or pulsa is communicated to me on a regularly basis. Countless times, I received a message from an unknown person asking for ‘pulsa’. Lately, I was nearly duped as the message started with the address ‘mama, please send me ‘pulsa. It’s urgent’. A very clever maneuver to appeal to parental concern, but fortunately I realized that the message came from an unknown number so I deleted it without further ado.

The arrival of the mobile phone has of course many advantages for parents and children alike. It is now possible to locate one’s child at any time and follow its needs much more easily than in the past. If there is a sudden change in the schedule at school, a simple short message (sms) is enough to go and pick her or him up from school in time. Thank God – or rather the inventors – for the mobile phone!

Interestingly, the arrival of the mobile phone has also wider consequences. Three years ago, the department of education on the island asked the local state university to find out why the school participation of girls in the poorest district of the island lagged behind significantly. It turned out, that the vast majority of the girls after finishing primary school did not go to junior high school. Seeing girls of neighboring households returning from the capital of the island, Denpasar, having money, wearing fancy clothes and – yes – possessing a mobile phone, they were of course attracted to follow their example and take up a job in household service. Their parents, although admittedly able to put them through school for another few years, let them go. After all, what use could a girl make of a junior high school education in the village? Better allow her to earn an income, support herself and contribute some money for the occasional ceremony at home or in the village. That is what I Luh, my other domestic help is doing.

In 1994, the Indonesian government has adopted the policy of compulsory school education until age fifteen and it is adamant to achieve that goal in 2015. But no way, that goal will be reached when no sanction against violating the rule is put in place and young girls as well as their parents value earnings over education, albeit for different reasons.

However, the mobile phone also – unintentionally – serves another professed objective of the government: eradicating illiteracy. A distant relative of my husband, a young man of twenty-five raised in the village, only went to primary school until grade two. He lost whatever ability to read and write he had acquired during those years. Then the hp hype took hold of him. But what use could he make of it without being able to read and type a short message? So somehow, he managed to learn this. However, he still isn’t able to write by hand …