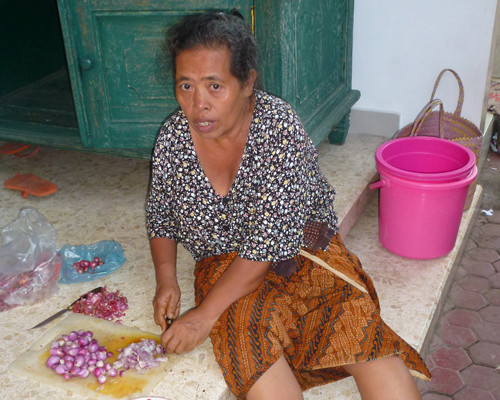 A Plate of Fride Rice by Sita van Bemmelen

‘Mbok, how long have you stayed at Oka’s house? A week already? Are you feeling better now?’, Bunik addressed her sister. Mbok Raka, next month sixty years old, nodded, telling Bunik that Oka, my husband, had ‘summoned’ her to come to Denpasar from Karangasem for a general check-up. Over the last couple of years, she has called Oka regularly to complain about her high pressure and a (presumed) bad heart condition, always asking for money for medicine. This time, Oka, wanted to know whether there was really something seriously wrong with her or if she just needed money for other things using her bad health as a pretext. It turned out that her blood pressure was indeed far too high. Fortunately the lab results demonstrated that nothing was wrong with her heart and the rest could be fixed by taking some generic drugs, exercise, reducing salt and drinking more water, because the ultrasound examination showed that she has a few small kidney stones.

‘So Mbok Raka has to change her lifestyle’, I concluded. ‘Why Balinese people like to put so much salt in their food? I can’t count the times I have warned your mother not to do so. I have even refused to eat the food she cooked several times. Yes, not nice of me to embarrass her in that way, but it was for her own good. The two of you know, that she had high blood pressure as well’, I recalled. ‘And look, Mbok Raka’, I added teasingly pointing at two cups on the table in front of us, ‘I have already finished my cup of tea, whereas you have taken one sip only. Think about Mbokmi, how she has suffered because of her kidney stones. Finish your tea right now!’

‘Hey, Sita’, Bunik said, ‘it seems your house is becoming a place of refuge for the sick and elderly in the family! Pedanda Gde stayed for so long with his wife at your house: what a burden’. The Pedande Gde, the eldest half-brother of my husband has lived with us for over a year until he died November last year at the age of eighty. ‘And presently you have taken in Mbok Seroja. How old is she? About seventy-five, eh? Why? Is she sick?’

Mbok Raka: ‘No, she is tiny and as thin as a broomstick, but there is nothing wrong with her. She only likes the peace and quiet at Oka’s place where she can do whatever she wants, which is mainly sweeping the floors. Twice a day! In the morning and in the afternoon. She wants to get away from her daughter-in-law because that woman is always nagging at her and confining her to her room. Poor Mbok Seroja. Imagine, the other day, she came into the dining room at half past seven, apologizing to Oka that she had overslept and had not yet started sweeping. You know what he said to her? “I cut your wages, Mbok!”’ Hearing this, Bunik, erupted in merry laughter and we joined in.

‘You know, Oka even brought Ponyong to Denpasar after the cremation of the Pedanda Gde, Bunik continued. ‘You remember her, Mbok Raka? She stayed for how long at Oka’s place; two weeks? Mind you, she is only a very, very distant relative of ours!’ Focussing her gaze on me, she asked critically: ‘What for, helping Ponyong?

I explained that Oka had done so out of pity for Ponyong, a woman in her late sixties. She had been hired to help out during the two weeks we were in Klungkung for the cremation of the Pedanda Gde. Oka noticed that her feet and ankles were swollen to a really worrying degree. Ponyong did not complain; just said it must be because she was old, had diabetes, and high blood pressure. She could not come with us to Denpasar because she had already left her own business, selling serombotan, a vegetable dish that is the culinary specialty of Klungkung, for too long.

But after we put pressure on her, she finally gave in. In Denpasar I took her to our general physician, lab tests were done, and drugs prescribed. It turned out, that a long-festering infection of the urinary passages was the main cause of those swollen ankles. We did not let her go back to Klungkung before she had finished the prescribed antibiotics, the swelling of her ankles had diminished, and a new lab test had confirmed that her sugar levels had dropped. By the way, we were lucky to have her at home for about two weeks, because Ponyong proved to be an excellent cook. The only problem was, yet again, that I had to warn her very sternly to put less salt in her dishes.

After explaining all this, I said: ‘You want to know why Oka went to all that trouble for Ponyong? It is because of a plate of fried rice (nasi goreng). You certainly remember the difficult days after 1965 when your mother could not put enough food on the table. You went hungry, were you not? Now, in those days, Ponyong already had a food stall and she had pity on Oka. So she sometimes gave him fried rice on a banana leaf. Perhaps that was worth more at the time than the help we have given her now.’