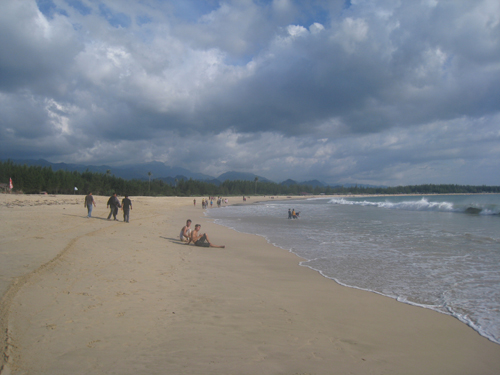 “Tourism has come back to Aceh. That is very good for us”, says Rizki*, as he pours us a morning coffee. Together with his brother Farid he runs a small homestay in Lhoknga, a quiet beach town not far from Banda Aceh. “In the high season it gets quite busy with tourists now. The people here are starting to profit. So are we”. I have known Rizki and his family for years now and met them many times over the last few years. But this time it is different. For the first time, I have come to Aceh as a tourist.

As I gaze down the street, two tourists race by on a motorbike, past signboards of other homestay’s and turn left at a sign in English, directing surfers to the beach. Veiled Acehnese women do their morning shopping in the nearby village supermarket as a truck unloads dozens of fresh water tanks. It is hard to imagine that only a few years ago, all there was to see here, was reminiscent of only one thing: the tsunami-disaster of 2004. Now, most ruins have been transformed into new houses, and those desolated are overgrown by plants. A first-timer to the town of Lhoknga, which had completely vanished after the tsunami, won’t notice anything of what took place here 7 years ago.

The first time I came to Aceh was only 5 weeks after the tsunami. I was volunteering for a small Dutch organization aiming to help in reconstruction work. The situation in Banda Aceh was chaotic as the city was teeming with traumatized citizens, army and foreign aid workers. We found a small village in the Lhoknga area, and started to help reconstruct its village centre. The villagers all lived in a refugee camp nearby. They were traumatized but tried to hold on to life the best they could. Rizki and his family, who are from a neighbouring village, had all survived the disaster. As surrounding hills protected their village, their house was also spared from the waves. 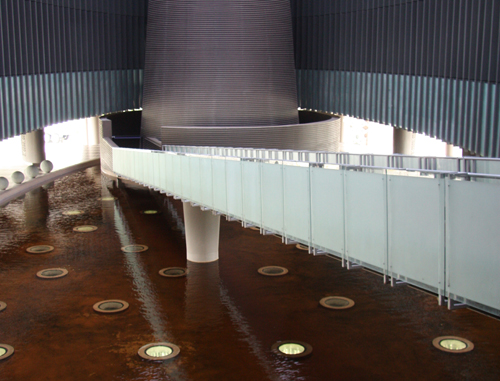 Over the years, I came back to Aceh regularly and noticed the small and bigger changes. As their wounds slowly started to heal, people started to look at the future again. Every time, more houses had been built, more businesses had opened and the roads were busier. The biggest milestone, of course, was the peace-agreement that was signed in 2005 between the separatist Free Aceh Movement (GAM) and the Indonesian government, putting an end to almost 30 years of conflict.

But although foreign aid and the peace process have done a lot of good for the Acehnese, there are also tensions. For example, over the years international donors had donated a lot of money and resources. But many of them donated to tsunami victims specifically, which has created a tension between tsunami victims, conflict victims and others.

A huge responsibility therefore rests on the shoulders of former GAM-leaders, whose political party, Partai Aceh, won gubernatorial elections last April. Zaini Abdullah, chief negotiator for GAM when it signed the peace treaty with the Indonesian government, won the election. Abdullah beat Irwandi Yusuf, who was denied a second term as governor of Aceh. For ruling Partai Aceh, the biggest challenge is how to bring more prosperity to the people in Aceh, who count among the poorest in Indonesia even though the province is very rich in natural resources. 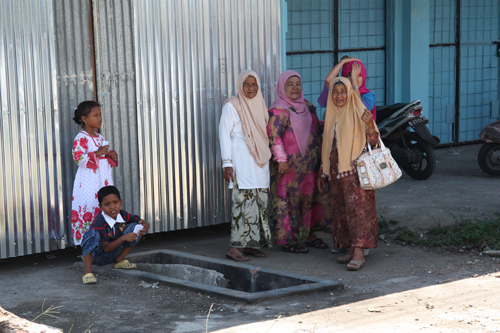 When I ask Rizki about politics, he says he is not too much involved in that. He voted again this year, but all he really hopes for is that peace and stability will prevail. Over all those years, he has had his share of hard time. But life looks a lot brighter now for Rizki. He studies hard and whenever there are tourists around, he works in the family homestay. He has his own business on the side, with which he earns the extra money he needs to pay his studies. When he graduates, he wants to go to Australia to get a Master degree.

Growing tourism can help that dream materialize. When tourist started to come back to Lhoknga a few years ago, Rizki and Farid decided to jump on the train. They were able to build their homestay with the money they had earned in the years after the tsunami, when they both worked for foreign NGOs. And everything seems to work out fine: Lhoknga is slowly regaining its reputation as a popular beach and surf town and their homestay is strategically located near the beach. Although sharia-law prohibits the selling of alcohol and dictates women to dress appropriately, Lhoknga surely is a great tourist destination, with Rizki as it’s most enthusiastic ambassador.

For him, there is no doubt that Aceh is moving forward again. And so is he. He works hard to support his family and make his dream of studying abroad come true. There are challenges ahead, but Aceh has come a long way. For people like Rizki and his family, tourism can be part of the solution. So please visit this beautiful province and spread the word.

* In the interest of privacy, names have been changed