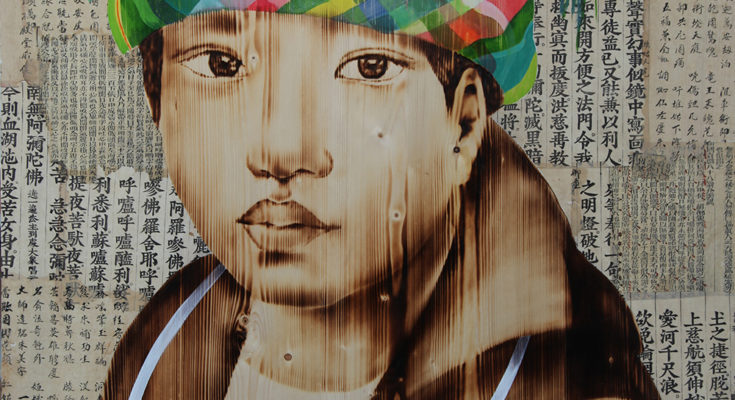 Slices, a solo exhibition of wood burn, acrylic on wood paintings by Hanoi-based artist Ngo Van Sac. In his third solo exhibition at CTG, Ngo Van Sac returns to his unique form of wood burn painting as a follow-up to his 2015 exhibition of collage and acrylic on canvas paintings entitled In Opposite. With Slices, Sac continues the evolution of his wood burn practice with the introduction of more acrylic paint and calligraphy, and through a change in primary subject matter from a focus on self-portraiture to the portrayal of the peoples of Vietnam’s ethnic minority groups. What remains the same are Sac’s working method which demonstrates a mastery of his materials, and the exciting outcomes of his experimentation. 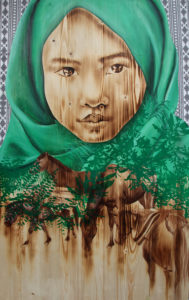 Of the origins of his wood burn works Sac says, “I have always been interested in exploring various materials since my time as an art student. My habit was to look at all my art works after each creative period and choose some pieces that I did not like to burn. Among the pieces that I burned, some were wood engravings. When burning these pieces, I realized that the fire created new works while destroying some at the same time. When using a hand held flame to create natural colors on the wood, I also try to exploit the natural grains in the wood as a means to enhance the characters in the paintings. Lines in the wood always come as a great surprise and add excitement to the creation of my works.”

Pyrography is one of humanity’s oldest art forms but in the hands of Ngo Van Sac the form has been reinvented and reinvigorated. Sac sketches an outline of the image he intends to create on to the wood surface and then uses a hand held flame to flesh the image out. Of his particular approach Sac says, “I searched on Google and found that I appeared to be the only one making paintings in this particular way. The fact that no one appears to have used this technique before made me feel very happy. People have long used fire to create paintings, of course, but in a different way. Metal strings and bars have typically been laid in fire until they are hot enough to use to make impressions on the wood. I don’t like that technique. I prefer my own which allows me to exploit the natural grains of the wood to create the stories in my paintings.”

Ngo Van Sac lives and works in Hanoi. He has had numerous group and solo exhibitions of his work both in Vietnam and abroad. Slices is Sac’s third solo exhibition at Craig Thomas Gallery.